What Pat Downs think about pat-downs 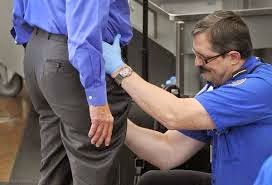 It was bound to happen. A quiet backlash is brewing amongst the people who love pat downs, enjoy pat downs and, gadzooks, have even become parents because of loving encounters with pat downs.

“I absolutely adore my Pat Downs,” says Jim Downs, who in a 1972 act of holy matrimony turned his beloved fiancee into something an increasing number of fidgety travelers denounce with venom.

He turned a perfectly respectable Pat Reed into Pat Downs.

“I turned on the news the other day and saw scrolling across the bottom, ‘People angry about pat downs at the airport,’ and I thought, ‘I don’t remember angering anyone at the airport,’” says Pat Downs, an Avenel, Maryland, secretary.

News reports late Monday indicated the government intends to reduce the number of pat downs, something that ought to make a number of confused and frightened Pat Downses flee for the border.

Thanks to the TSA’s intimate security measures, pat downs have overnight become a national punching bag. They do pat down skits on SNL, cable news channels air experts debating the efficacy of pat downs at the airport and at coffee shops, taverns, and hair salons across the nation, the topic of pat downs has become a conversational lightning rod.

First of all, there are Pat Downs in nearly every town in America. Pat Downs delivers your mail in Toledo. She teaches piano in Spokane. You could be sitting right next to a genuine Pat Downs on a bus and never even know it.

“I put on my Facebook page the other night, ‘I am Pat Downs and I do not appreciate people not wanting me in their airports!’” says Pat Downs, a 48-year-old systems administrator for a Little Rock, Arkansas, general contractor.

She said the onslaught of news stories about Pat Downs has put a focus on a name that for years had been unburdened by any snickering notoriety.

“A friend of mine, I’ve known him for years, never made any connection about my name until he saw ‘Pat Downs’ in a headline,” she says. “Now, he thinks it’s hilarious.”

Others, like 33-year-old Pat Downs of Toledo, Ohio, was so enamored with the name’s connotations he almost let it dictate his career.

“Honest, I almost went into law enforcement because I wanted to be known every where I went as Officer Pat Downs,” he says. “Instead I became a mailman for the U.S. Postal Service.”

Whenever he wants to avoid hearing predictable jokes, he simply introduces himself as Patrick Downs so most people fail to making the obvious connection.

Of course, some of those who love their Pat Downs will hasten to inform others that they are getting their pat downs from the real thing.

“I’m a mechanic and I heard the guys talking about pat downs and I told them I know everything there is to know about Pat Downs,” says Jim Downs, 68. “She’s the mother of my two kids. I’ve loved her since the day we met. When people say they hate pat downs, I tell them they’ve never met my Pat Downs. I’m a lucky man to have Pat Downs in my life.”

As for the crux of the debate, Pat Downs it seems are, like the rest of us, divided on pat downs.

“I disagree with the procedure,” says the Toledo Pat Downs. “I know these guys have a job to do and are only getting paid about $12 an hour. I’m sure they’re not thrilled about it either. But I don’t think they should be able to use the front of their hands or come that close to the private parts. I wouldn’t want them doing that to my daughter.”

Little Rock Pat Downs, however, disagrees. “I don’t really see the problem,” she says. “It’s done in public and not in a private area behind closed doors. If it prevents anyone from getting on a plane with a bomb, then I’m for it. It makes me feel safer. We’ve already had one underwear bomber so it’s not like this is something someone just dreamed up.”

So let’s hope that clears up some misconceptions and restores some civility to a debate about what we have to expect from Pat Downs -- “a delicious barbecue chicken for one thing,” according to Jim Downs. “She’s a great cook, but that chicken’s outstanding.”

And then there’s this: Of all the Pat Downs surveyed for this story, Pat Downses from around the country, not a one of them confessed to an urge to spend a long day going from one garage sale to another to browse over tables of stuff you no longer want.

In short, Pat Downs don’t want anything to do with your junk.