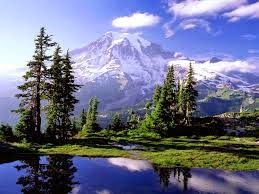 When Jim and Carol Miltimore approached officials at Mt. Ranier National Park about volunteering, they thought the retired couple might spend a sunny afternoon bagging trash.

They had no idea that six years later, the Enumclaw, Washington, couple would log more hours in the pristine park than many native bears.

In six years, Jim, 70, and Carol, 63, have logged in excess of 12,000 hours of volunteer time making the 378-square mile park cleaner, more accessible and ever-luscious.

“They are this sweet couple who upon retiring they didn’t want to golf, they wanted to give back to something they really believe in and that’s the national park system,” says Kevin Bacher, park volunteer program coordinator. “They’ll dig ditches, clean restrooms, clear trails and spend hours working in the park library system. There’s nothing they won’t do.”

Imagine the impact on the national deficit if every able-bodied man and women in America contributed on behalf of the federal government the way the Miltimores do for free.

And they consider it their privilege.

“We’re avid hikers and nature lovers and, really, I think we get more out of it than the park does,” says Carol, a retired data analyst. “The scenery is breathtaking. Just yesterday I was up working in a field of wildflowers at 6,400 feet with Mt. Ranier in its full glory. It was magnificent.”

Those opportunities abound in our national parks, an institution referred to in a recent Ken Burns PBS documentary as “America’s Best Idea.”

Go to www.nps.gov/volunteer and scroll through the options that let would-be volunteers across the nation select where they want to work, how often they’re available and what level of exertion they’re prepared to dispense.

“We’re friends with a volunteer who saved the park service $500,000 by designing them a bridge,” says Jim, a retired chemist. “People volunteer video services, labor -- you name it.”

Acting park superintendent Randy King says park volunteers enjoy a spiritual connection to the land that borders on the mystical.

“It’s just a great way for people to give back,” King says. “Volunteers form a deep connection to the land.”

The Miltimores spend as many as six days and nights a week at the park, sometimes sleeping in cabins they helped construct.

Such devotion is not without sacrifice.

“We can’t have pets and our garden is on its own,” Carol says. “But here at the park we get to see plenty of ground squirrels, marmots, mountain goats and bears. Just last week a big bear charged Jim.”

Jim says it was just a “bluff charge,” something a bear does half-heartedly to try and make itself look superior.

Or maybe the bear simply sensed Mt. Ranier National Park will always be home turf to the Miltimores.