Ghosts and ghostings in haunted Virginia 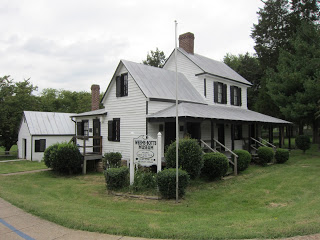 Ghosting is the act of deliberately departing a social event or relationship without informing friends or your partner.
Cherlize Theron was recently in the news for ghosting from Sean Penn. No message. No explanation. After a nearly year-long love affair, she just split.
It was very cold, yes, and I’m always saddened anytime celebrity love dissipates, but Penn’s been such a surly jerk for so long it’s really not surprising. It’s just too bad he won’t ghost himself from our collective consciousness.
Some consider ghosting cowardly. Others say it’s a surgical social maneuver to avoid awkward goodbyes.
Me, I wish I had the guts to ghost.
Simply vanishing is vastly preferable to mouthing all the pat inanities that bust small talk clear down to atomic level.
Ghosts have been on my mind the past two days.
In fact, I can add a cool new experience — an entirely paranormal one — to my blustery pseudo-credentials.
Ghostbuster!
Promoters of the Discover Prince William County in Manassas, Virginia, saw my “Use All The Crayons TRAVEL!” endeavor and wanted to be included.
It was very flattering and I wanted to make it happen. They offered me a golf itinerary.
No. Golf doesn’t fit with the crayons theme.
How about outdoors? Family? Arts?
Nope.
“How about ghosts? This is a hotbed of paranormal activity. We even have a haunted winery where staff must leave a glass of wine out for its ghost every night or else the ghost gets cranky.”
Drunken ghosts? Sounds like my kind of party.
So that’s how I happened to find myself among about a dozen paranormal investigators in the historic Weems-Botts House in Dumfries as the bewitching hour neared.
Mason Lock Weems was a colonial contemporary of Thomas Jefferson and George Washington and authored the long-discredited fable about Washington cutting down the cherry tree. Benjamin Botts, another owner, is best known for being the attorney who secured an acquittal for Aaron Burr, Jefferson’s vice president (and accuser) in his 1807 treason trial.
The grounds are strewn with tales of hangings and disturbed graves of ill-fated Rebel soldiers.
The weirdest part wasn’t all the ghost stories.
The weirdest part was all the true ghostbusters were all staring eagerly at me.
It wasn’t like they’d seen a ghost — all of them assured me they had. It was more like they’d seen a promotional bonanza.
I thought the visit would be a simple tour.
The investigators and been told, I think, I was some kind of expert and I was going to spend the night profiling their experiences and methods.
It left me in an awkward position. I’ve done some ghost writing, sure, I wasn’t the kind of ghostwriter for which they were hoping.
Our lead ghostbuster looked and acted the part. She looked like Stevie Nicks would if Stevie Nicks were more casual about her diet.
She kept talking to the spirits I could not see.
“Mamie? Are you here? I brought you some necklaces. Come out and say hello. These are our friends.”
The investigators minds were searingly focused on summoning a spirit.
She asked me at one point what I was thinking.
In fact, I’d been thinking what a great story I’d have if I could summon a really loud fart.
“I’m thinking,” I said, “the ghosts are being shy.”
It’s too bad. I really would have enjoyed a good shocking, anything to jar my hardening cynicism.
The trip was great, too. I enjoyed an afternoon ghost walk in quaint Occoquan and loved my brief afternoon at the haunted winery, La Grange in Haymarket.
But, of course, I’ll most remember my first seance, an event where we tried and failed to reach the spirit world.
The ghostbusters all eventually drifted away and clustered at a nearby pavilion as the night went on.
They were telling stories and sharing experiences involving lost souls, hauntings, exorcisms, spirit orbs and a world few will ever comprehend.
It looked to me like the kind of collegial bull session that would endure till dawn. I’d have been fine with that kind of socializing if someone had only conjured up a keg.
So I just kind of slipped away.
They’d spent the night looking for ghosts without ever realizing one had, I guess, been there all along.
I’d ghosted the ghostbusters.
So the night wasn’t a total loss.
I realized driving back that at least my spirits had been lifted.

Conspiracy theories about Kecksburg & UFO parade
Posted by Chris Rodell at 10:47 AM