Bedford Springs: Ghosts in the glass at historic resort 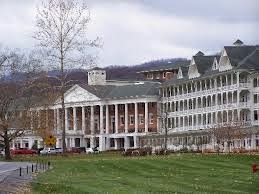 The mysteries surrounding Millie Schwartzfelder reverberate through the ages. They are refreshed anew with every curious glance out the frail pane of ghostly glass that bears her name from 1888. Staring at her long ago scratches stirs the imagination.

Did her husband turn frosty in the face of her suspicious nature? Did she live happily ever after?

We may never know, but after spending several days at the posh $120 million Bedford Springs Resort and Spa, this much is certain: The old gal probably had one heckuva honeymoon.

Because the best “new” resort in America will turn 213 years old this year. After nearly two decades in the dark, one of America’s greatest resorts stepped back into the spotlight in July  2007 and is being  hailed as a place to revel and relax amidst soul-restoring sylvan surroundings, just like it was when inspired Millie Schwartzfelder to turn vandal.

The name Bedford Springs has resonated as one of America’s best resorts for nearly as long as there’s been an America. The resort opened its doors in 1796, and it wasn’t long after that that staffers were heard to say, “Burr” in the summer.

No, a freak cold spell hadn’t swept central Pennsylvania. Rather it was Aaron Burr, the third vice president of the United States from 1801-1805 under Thomas Jefferson. He was here in 1806, two years after dodging Alexander Hamilton’s bullet in what remains the most famous dual in American history. Burr’s bullet killed Hamilton, and his visit assured notoriety for the fledgling resort. (Note to trivia fans: It would be 202 years until another sitting vice president shot a civilian).

Soon, the dignitaries and history at Bedford Springs began piling up. Ten sitting or future U.S. presidents would sign the registry, including Andrew Jackson, Dwight Eisenhower and Ronald Reagan.

In 1895, Spencer Oldham built one of the first golf courses in America at Bedford Springs. Renown architects A.W. Tillinghast was hired to redesign the course in 1912, as was Donald Ross in 1923. For non-golf fans, hiring those two legends to work on the same golf course is like hiring John Lennon and Paul McCartney to add their pop flourishes to an already tuneful number.

The resort earned national acclaim in 1905 when it opened one of the first indoor mineral water-fed swimming pools in America. Such innovation helped it thrive until 1985 when flooding, neglect and disinterest led to its abandonment.

A place that had spent nearly 200 years as a shimmering memory for couples and families, fell to the everlasting care of just one man, Bedford resident William Defibaugh.

“I started collecting stuff from the resort auctions back in 1964,” he says. “My great- grandfather worked there, as did his father and his father. I figured I’d better learn a thing or two about the place.”

His fervor for collecting resort memorabilia from the past is what elevates it in the present. His foresight proved a godsend to investors who in 2004 dedicated themselves to restoring this National Historic Landmark to its heirloom grandeur. Prominent among the investors is Mark Langdale, U.S. ambassador to Costa Rico, a Dallas resident who is said to be lobbying his friend, President George W. Bush, to be the next head-of-state to sign the resort registry.

Defibaugh’s collection of antiques, registries and vintage pictures are juxtaposed by discreet, resort-wide WiFi hubs that allow today’s most technologically demanding guests to stay in touch while reclining in the ubiquitous hickory rocking chairs that line the verandahs and invite guests to get rocking in a way that won’t disturb the serenity.

One bow Defibaugh cannot take,. he says, is for the handiwork of the late, long-forgotten bride Millie Schwartzfelder’s handiwork. Of all the historical artifacts dotting the property, ones like hers, which is the oldest, are the most fascinating.

“That’s what the brides used to do to determine if the diamonds in their engagement rings were real or fake,” he says. “So in a playful moment, Millie must have gone over to the window by the Colonnade Room and carved her name in the glass.”

The ancient panes themselves are magnificent, old and melted with age so that the rocking chairs on the outside porch seem like surreal works done by Dali.

No records exist of what happened to Millie, who she married or, really, if she ever even existed. If it’s a promotional stunt -- Defibaugh swears it’s not -- then it’s one of genius. Guests crowd around resort tour guides all day and night and gaze at the glass as if they’re beholding ghosts.

They haunt the pens of every couple that's ever awkwardly dickered over a prenuptial agreement and wondered how long together forever really means. Couples married here today can count themselves lucky if their matrimonial longevity measures even a fraction of that being extended by Bedford Springs.