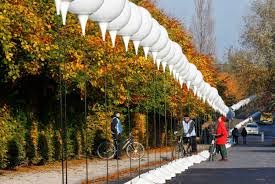 You won’t find it in any of the physics books, but it takes 50 years to turn 87 miles of concrete malignancy into something elastic, from a structure conceived in hate to something artistic enough to be hailed as haute.

The Berlin Wall, as foreboding a static symbol of Cold War menace as any conceived, has done something that would have infuriated its armed Communist overseers.

It put down its guns and abandoned its post.

And in doing so it has become an evergreen tribute to liberty and one of history’s most nimble symbols.

Renown for the past 22 years as a site of exuberant triumph, the celebrations will take a somber turn on August 13, the 50th anniversary of the day the Soviet-controlled German Democratic Republic began to build what it euphemistically called its “Anti-Fascist Protection Rampart.”

Few would have ever imagined then what would eventually become of the blood-splashed concrete.

Today, more than 72 sections of the wall have been purchased or donated for display around the world in parks, presidential libraries, at museums, in church yards, in resort playgrounds, hotel lobbies and outside of Las Vegas casinos where people gamble for stakes far less consequential than the ones escaping East Germans used to face.

Klaus-M. von Keussler was a university law student in West Berlin in 1961. He remembers thinking when the wall began going up that it would be temporary nuisance.

He couldn’t have known it would endure for 28 years and would transform his life from earnest law student to passionate freedom fighter who risked his life to help 68 defectors defeat a wall fortified with beds of nails, attack dogs, bunkers and 116 watchtowers manned by guards with orders to shoot to kill.

“None of us believed it would last more than a few weeks,” says von Kuessler. “When we realized it wasn’t going away, we went into the escape helping business. We saw it as our duty. We knew a free Berlin was a bone stuck in the throat of the Soviets and their desire for a unified communist East Germany.”

The global euphoria of its November 9, 1989, tumbling has for an entire generation  obscured the inhuman blight of what the wall meant to men like retired Col. Vern Pike.

“The bitterness of what happened there will never leave me,” Pike says. “The Berlin Wall today is something people celebrate, but I have too many excruciating memories of it to ever celebrate it.”

Beginning at 1 a.m. on August 13, a day of commemorations, prayers and artistic expression will take place at the Berlin Wall Foundation along the historic Bernauer Strasse. Ceremonies will include the readings of the names of the 157 -- a consensus tally -- East Germans who were killed trying to escape between 1961 and 1989. Some estimates put the total brutally gunned down at nearly twice that number.

Visitors will learn what Pike, today a 75-year-old military retiree living in Pinehurst, N.C., saw that infamous night when he was a 25-year-old Military Police 1st Lieutenant on duty at what became famous to the world as Checkpoint Charlie, a flashpoint of Cold War tensions between East and West.

“It was 1 a.m. and I got a report something strange was going on,” Pike says. “East German engineers were digging post holes in the middle of the street and stringing barbed wire around their quadrant of the city.”

Uneasy peace treaties from World War II had divided Berlin into four distinct sectors with victorious allies (U.S., French, U.K. and the Soviets) each getting one piece of the 3.5 million-person metropolitan pie.

In a series of moves that would foreshadow Communist intentions over the next three decades, the Soviets instituted a harsh police state, severed phone lines to the outside and began indoctrinating students into Marxist-Leninist beliefs. A brain drain ensued with East German professionals fleeing to the West.

They eventually built the Berlin Wall under the guise that Berlin had not been purified of Nazi influence.

The division led to near daily examples of human triumph and despair. The memories are indelible to Pike, author of the memoir, “Checkpoint Charlie: Hotspot of the Cold War.”

“There was so much heartache, violence and death,” he says. “And they kept making the wall worse and more lethal.”

Fluent in German and a visible authority figure, East Germans construction workers quietly beseeched him to intervene as they labored under the watchful eyes of the guards.

“I remember one East German helping to build the wall saying, ‘Lieutenant, I’m working as slowly as I can. What are you waiting for?’ He wanted us to knock the wall down down before it even went up.”

The world reacted with revulsion to each sensational death like on August 17, 1962, when Peter Fechter, an East German teenager was shot in the pelvis while trying to escape. His body lay tangled in a barbed wire fence and he bled to death in full view of of the gathering media. American soldiers could not rescue him because he fell a few yards within the Soviet sector.

Each escape attempt meant soldiers like Pike needed to balance their human instinct to intervene with understanding that any event could trigger an international incident that might turn the Cold War hot.

“I’ll never forget one refugee, an East German school teacher, who’d gotten ahold of a old U.S. Air Corp Ike jacket,” Pike says. “He just confidently walked past the East German guards who didn’t know what to think. When they finally realized it was an escape attempt, they grabbed for him right on the line at Checkpoint Charlie.”

A literal tug of war ensued between East German police and U.S. MPs with the struggling teacher serving as the human rope.

“One of my sergeants took out his billy club and he bopped the two Volkspolizei (East German People’s Police) on their heads. They let go and our guys dragged that teacher to freedom. All the Berliners were cheering like crazy.”

Most of the escapes involved more stealth, according to von Kuessler.

“We were always tunneling and forging passports and always looking over our shoulders because we could be arrested for our escape efforts. We never asked any of the escapees for money. Those of us who devoted our lives to helping people escape risked arrest on the western side of the wall and death on the eastern side.”

He eventually took a job with the United Nations and von Kuessler was in Ethiopia when the wall constructed to keep people in and ideas out began to collapse.

“I immediately flew to Berlin, climbed up on the wall and sat there and cried,” he said.

On the anniversary he intends to visit with friends who were strangers when they needed help evading one the 20th century’s most fearsome boundaries.

“We’ve become really close,” he says. “We were once bound by our shared hatred of tyranny. Today, we are bound by love.”