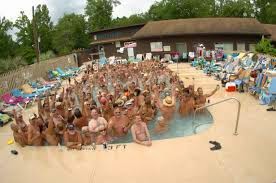 The rules are explicit where the behavior is not. If a naked man finds himself becoming aroused he needs to cover himself with a towel, lay down on his stomach or depart the premises.

The only thing today’s nudists are interested in raising is awareness. Yes, the people who shun clothing are seeking coverage.

“We’d like everyone to know how much better off we’d all be if everyone knew the physical, spiritual and emotional benefits of nudism,” says avid nudist Dr. Gerry Goodenough. “The constricting emotional doors all drop away and pretty soon we’re all playing like little kids again.”

The most prurient questions arise when talking to someone like Goodenough, 68, a man who has spent the better part of the past 30 years roaming the globe buck naked.

Do nudists have a lot of sex?

Do people ever stare at your most intimate flaws?

And just what the heck do you folks do to conform on Casual Fridays?

National Nude Recreation Week kicks off with a metaphorical bang July 4, and nudists are inviting all America to doff the duds, immerse themselves in bug spray and a minimum of SPF 30 and join them for a skinny dip, a hike au naturel or outdoor frolic in their birthday suits.

Like “Hands Across America,” the ballyhooed 1986 stunt involving 6.5 million Americans who sought to join hands across the breadth of the entire country, National Nude Recreation Week hopes to emulate aspects of the inspiration on a more cheeky level.

“If people would only try it once, I think they’ll see the joys of being naked outdoors,” says Carolyn Hawkins, spokesperson for the American Association for Nude Recreation (http://www.aanr.com) in Kissimmee, Florida. “During Nude Recreation Week, most clubs open the doors for free and let people come in and see how much wholesome fun nude recreation can be.”

Call it Hams Across America.

Nude recreation, once stereotypically confined to the volleyball court, is doing what you’d expect of a pastime enjoyed by people without clothes: It is coming in from out of the cold.

The year-round nudist calendar is filling up. National Nude Gardening Day was May 14; The World Naked Bike Ride (motto: “Bare as you Dare”) was June 11; and the ever-popular Nudestock will be celebrated at various clubs (check local listings) August 27.

And hundreds of thousands of Americans will make plans to visit one of the 260 AANR approved nudists resorts and clubs across North America. They may be short on pockets, but they’re long on cash. The AANR estimates naked Americans will spend $440 million on so-called “nakations” this year.

“Every recreational activity you enjoy doing with clothes on you can enjoy even more doing without clothes on,” says Goodenough, a retired physician and one of 400 Corona, California, residents at the Glen Eden Nudist Resort (http://gleneden.com/) , a resort with 1,600 members at a place whose name pays purely coincidental homage to the home of earth’s original nudists, Adam and Eve.

Talk long enough to enough nudists and you’ll get the confounding sense the only recreational activity they’re truly opposed to doing naked is scoring some sex.

“The biggest misconception is that today’s nudists are a bunch of swingers and party people,” Hawkins says. “But any group affiliated with the AANR must maintain family standards.”

Nudists for years were stigmatized as sunburnt oddballs who dwelt in rustic “colonies” down old dirt roads.

That the image is changing is due in large part to work done by nude entrepreneurs like Tom and Nancy Tiemann owners of the Austin-based nude travel agency Bare Necessities Tour & Travel (http://cruisenude.com).

Back in 1988 the two were self-described “backyard nudists” when they accidentally strolled onto a nude beach in the West Indies. What they say they saw opened their eyes in ways that had nothing to do with a good, long reflexive gawk.

“We saw these weren’t trashy people,” Nancy says. “They weren’t deviants. They were genuinely nice people from a broad socio-economic background. What they wanted were more upscale options.”

The Tiemanns decided to roll the dice and see if they could find a cruise line that would agree to book a nudes-only cruise ship. Tiemann says jaws dropped when she told prospective bookers that trou would.

“Really, the biggest difficulty was getting someone to not hang up. They all thought it was a prank.”

What started as a quixotic quest to fill a rickety 36-passenger dive boat with naked men and women in 1991 has grown into a thriving niche industry that is taking reservations for a February 2013 cruise extravaganza that will include a cargo of sunscreen ample enough to protect an expected 3,000 nudists, none of whom are aspiring to any “best dressed” cruise awards.

“It’s a 9-day cruise from Ft. Lauderdale through the Panama Canal and we’re calling it The Big Nude Boat (http://www.cruisenude.com/thebignudeboat.html),” she says. “It’s exceeded all our expectations. The cruise lines now compete for our business, as do the ports. They know we spend money and they know we wear clothes whenever we’re off the boats or the captain asks us to”

It may sound oxymoronic, but the nudists are uniform in beseeching the understanding of their clothed brothers and sisters who mistakenly believe their pastime involves swinging, swapping or other adventures involving randy danglers.

“People need to understand nudism isn’t about getting a really great tan,” Tiemann says. “It’s about accepting ourselves and one another as we are. If nudists share a common thread it’s about believing in the importance of everyone being comfortable in one’s own skin.”

Still, that’s a mighty big if considering the impossibility of people not wearing a single stitch being able to share a thread.

• Travel experts say nudists tend to pack just as much to go on a nakation as clothed tourists.

• Any game of 8 Ball played by two naked men is still called 8 Ball.

• Nudists at sea conform to a dress code. In the formal dining room, clothes must be worn for safety reasons. Trays of scalding coffee and flaming basked Alaska don’t mix with exposed skin aboard rolling decks.