Born of blood, Taos today is all about art 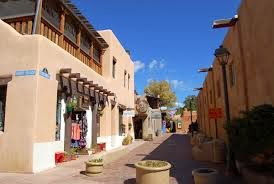 The rich history of northern New Mexico indicates that many of the people here spent an excessive amount of time trying to draw someone else’s blood.
The Spaniards tried to kill off the Native Americans, the Native Americans tried to kill off the Anglos, the Anglos tried to kill off the Native American and Billy The Kid tried to kill off anyone who looked at him funny.
They drew guns, they drew knives and shed rivers of blood so vast that the whole landscape still seems tinged with the crimson fluid of fallen warriors.
Times sure have changed. Now, it seems everyone in northern New Mexico is there to draw works of art.
What gives?
Must be the tequila.
As Southwestern as sagebrush, the potent liquor, like few others, is capable of inflaming passions of rage and creativity. Spend any time here and you’ll find a people, particularly a growing number of tourists, don’t have any trouble holding their liquor. In fact, they have trouble ever setting it down.
Indeed, Taos is a fine city for sippin’. After a day of ambling among the adobes and the galleries galore, nothing quite hits the spot like a salt-rimmed margarita or two. The blue skies, too, are so vivid you might find yourself spending an inordinate amount of time drinking them in as well.
The area was settled on an erroneous report that this otherwise desolate region was home to to the fabled Seven Cities of Cibola, dwellings believed by Spaniards to be constructed entirely of precious gold. And if that isn’t evidence of tequila-inspired hallucination, then the standoffish cactus can dance the hokey-pokey.
In reality, the golden hue of the Zuni Indian villages was likely the result of the brilliant Southwestern sunshine striking the adobe walls made of mud and dried straw. The hollow straw in the walls elves as excellent insulation for desert temperatures that that can vary wildly from nighttime chills to daytime baking worthy of Betty Crocker.
Today, adobe is the architectural style of choice, even for the neighborhood mini-marts. It’s a pleasing enough style to at least consider taking up squatter’s rights in the former home of Nicolai Fechin. The Russian artist (1881-1955) as drawn to the Southwest by the rugged beauty of the landscape. The home he constructed in 1927 ranks with Frank Lloyd Wright’s Fallingwater as one of America’s most distinctive and landmark homes. The home is next to the Fechin Inn, an intimate 85-room and suite hotel.
Also outstanding for romantics is The Inn on La Loma Plaza. Each of the seven rooms is finely appointed with Southwestern collectibles and a cozy fireplace. If there’s no room at the inn, try the historic Taos Inn where they’re supposedly overbooked with apparitions.
These inns are all within an easy walk of the majority of fine restaurants and galleries in Taos, a town of just 6,200 — and it’s doubtful there’s a starving artist among the bunch. There’s too much good, cheap eats. The portions at places like The Trading Post Cafe and The Apple Tree Inn are generous and the prices are family friendly.
Little dispute among the locals about the best restaurant in Taos. It’s Doc Martin’s at the Taos Inn. Zagat’s dining guide says it’s No. 1 in northern New Mexico.
But satisfied appetites are the only reason you won’t find any starving artists in the glamour galleries. This is a land where a steamer trunk-sized block of granite can be polished into an inscrutable shape, named “Winter,” and still find an upscale audience eager to bid as much as $800,000.
It seems like a poor bargain, especially when priceless landscapes and sunsets abound. Spanish Conquistadors named the peaks that tower over Taos, Sangre de Cristos, or Blood of Christ.
The Native American population infuses Taos with a  spirituality that adds hue and emotion to any visit. Burning cedar and piñon perfume the air at Taos Pueblo where visitors must ask permission to take a resident’s picture.
The ruins of the old San Geronimo Church are a stark reminder of the bloodlust that once consumed inhabitants. In 1847, in bitter retaliation for the murder of territorial Gov. Charles Bent, the Army bombarded the holy place, killing 150 men, women and children.
Once fighting extinction, New Mexican Native Americans have at last hit the jackpot. They are using huge profits from their casinos to to buy back ancestral lands. The nations are pushing to become just that; someday tourists visiting Taos Pueblo may need passports to get in.
There’s a story, probably apocryphal, that tells of the day when two embittered Taos men sought to settle their bitter differences by meeting at an agreed time with their firearms.
And one shovel.
The survivor would dig the deceased’s grave.
Times change and so has Taos.
Today the men would probably take turns digging a garden.


Taos today is more about growth than graves.
Posted by Chris Rodell at 12:27 PM