When Benny Binion bet on Vegas, everybody won 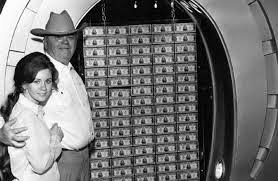 The name Benny Binion may not be as familiar as the inventor of the light bulb, but what the roguish Binion helped invent outshines even Thomas Edison.

His namesake casino on Fremont Street is celebrated its 60th year as the city’s longest continually operated gambling hall in 2011.

“What Benny Binion once said is the essence of what Las Vegas is today,” says Dr. Michael Green, professor of history at the College of Southern Nevada, and a researcher at the Las Vegas Museum of Organized Crime and Law Enforcement, set to open in February.

He turned Vegas from a place to go to gamble into a place where today 36.7 million to go to splurge.

At a time when crap table limits were typically set at $50, freewheeling Binion’s was set at $500. When that proved a hit, he raised the limit to $10,000 and eventually made Binion’s a sensation by doing away with limits altogether.

Today, Binion’s attracts devoted gamblers who go there to gamble the same way golfers go to St. Andrews to golf. It’s to them hallowed ground.

“Binion’s is where the World Series of Poker all started in 1970,” says current casino GM Ted Lager. “Sixty years after he founded Binion’s Horseshoe, that name still carries a lot of weight.”

Green says he is also synonymous with Vegas today because he re-invented himself while he was inventing Sin City.

“He was a gambling and casino operator in Dallas, a bootlegger with bodies in his background. When he was asked why he left Dallas, he said, ‘My sheriff lost.’”

Green says his warts-and-all story (he was in federal prison from 1954-57 for tax evasion) time mirrors that of his adopted home. He died Christmas Day 1989 and was eulogized as an 84-year-old philosopher king who never learned to read.

One of disciples: current Vegas impresario king Steve Wynn who said of Binion: “He was either the toughest gentleman I ever knew or the gentlest tough man I ever knew.”