Darwin, Minn., the town saved by giant ball of twine 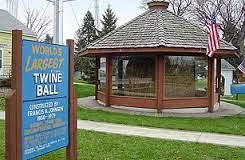 You wouldn’t want to be in Darwin the day Earth gets invaded by giant cats.
This is the home of the world’s — oh, what the heck — the universe’s largest ball of twine collected by a single person. At 11 feet, 9 inches high and 40 feet around, the 8.7 ton object is large enough to give a pachyderm-sized feline nine lives of numb-skulled fun.
For the 250 people of Darwin, Minnesota, the twine ball has provided more than enjoyment. It’s provided a living. Of course, it goes without saying that much twine can really bind people together.
Hank Quinn of the Darwin Community Club said the town was hanging by a proverbial thread before the giant ball really got things rolling.
“This town was saved by the giant ball of twine,” said Quinn, uttering the title of what would make one heck of a Adam Sandler flick. “Without that ball of twine, Darwin would be dead. All there’d be would be the bank the machine shop, and the grain elevator. That’s it. Its success has breathed life into Darwin.”
Today, thanks to eccentric collector Francis Johnson, Darwin has the world on a  string.Visitors from around the globe stop to gawk in the twine ball’s custom-built pagoda. They buy souvenirs, pose for selfies and pump money into Darwin businesses.
Dig deep into the heart of the twine ball, into the heart of Darwin, and you’ll find the late Johnson, a carpenter by trade and a fanatical collector by nature and parental decree.
“He used to say, ‘My mother taught me to keep everything,’” said his nephew, Harlan Johnson, the trustee for the bachelor’s estate. “He was a very frugal man and never threw anything away — nothing. H once sold a man a bicycle with 5-foot tires and, until his dying day, tried to get that useless bike back.”
When he died in 1989 at the age of 85, his collections included 7,000 pencils, 1,700 nail aprons, 1,200 wrenches, 500 hammers, 400 horseshoes, 40 cases of beer.
And one ball of twine.
Of course, that hardly does the endeavor justice. Maybe it would be more fitting to say millions of pieces of ordinary bailing twine strung together so that with proper prairie wind, an ambitious kite-tender could sail a tethered sheet from Darwin to, perhaps, Jupiter. No one really knows.
Starting in 1950 and continuing without cessation for the next 29 years, Johnson never passed a piece of bailing twine, common among neighboring farmers for bundling hay, without stooping to pick it up. Later, he’d return home and tie onto the growing sphere.
“He never had a reason for collecting,” Johnson said. “He just couldn’t stand to see anything go to waste. I guess he thought someday he’d put it to use.”
Unfortunately, he never lived to see its ultimate use. He willed the twine ball, already a roadside attraction along Highway 12 about 58 miles west of the Twin Cities, to Darwin, pop. 256
On June 25, 1991, a crush of media watched local crane operators ploddingly cart the ball less than a mile from Johnson’s home to a downtown pagoda where it is today enshrined.
It’s since become a cultural icon referenced in both a Chevy Chase “Vacation” movie, and a Weird Al Yankovic song:
We parked the car and waked with reverence toward that glorious, majestic sphere
I was so overwhelmed by its sheer immensity I had to pop myself a beer
Since then more than 25,000 people from all over the globe have signed the guest book.
None of the good-natured fun ever bothers the people of Darwin. They cheerfully endure all the puns as long as they keep the registers ringing.
Proceeds from the twine ball and related endeavors (Twine Ball Days is a hit every summer), raised enough money to reopen the grocery and the diner renamed — you guessed it — The Twine Ball Inn. Residents say without these small-town fixtures Darwin would be dead.
“The twine ball put life back into town,” said Quinn. “It’s brought us a sense of community. We’re proud to say we’re from Darwin.”
But if you’re in Darwin, don’t be disappointed if all you get is some friendly conversation and a chance to take a picture with iconic tourist attraction.


For a town that’s tied its fortunes to a big ball of twine, Darwin isn’t exactly what you’d call well-rounded.