It's cool in Hell; U.S. places named for hot/cold stuff 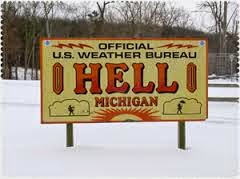 Civic boosters will swear you won’t be toast in Toast, you won’t get scalded in Hot Coffee and you can still enjoy ice cream in Hell without fear of it vaporizing.

Much of America is complaining it’s hotter than hell, but the man who runs Hell’s ice cream shop says the scare-a-mel’s maintaining its gooey consistency.

“It’s been a great summer for selling ice cream in Hell,”  says John Colone of Scream’s Ice Cream in Hell, Michigan. “It’s always busy because more people are told to go to Hell than any other town in the world.”

In a summer when people are baking in Baker, Nevada, seeking air conditioning in Furnace Creek, California, and making believers of anyone who ever doubted the integrity of the “Welcome To Frostproof, Florida!” signs, the nation’s coolest towns are doing a few degrees of mercurial boasting.

“It’s very cool, in Cool,” says Jody Franklin, Director of Tourism with the El Dorado County Visitor’s Authority in Northern California. “It gets in the 90s but there’s no humidity.”

She says heat-stressed travelers are invited to chill in the area’s wineries and go panning for gold in the historic South Fork of the American River.

And, certainly, you can find refreshment in Coldwater, Missouri, but only fools would forego the sunscreen.

It’s not like that in Hot Springs, Arkansas, a town that swear’s it’s so cucumber cool toasty Texans are flocking there.

“We’re known for our lakes, our trees and our mountains,” says Steve Arrison, executive director for the Hot Springs Convention & Visitor’s Bureau. “People from Texas come up here and think they’ve found an oasis.”

So the heat is as much a matter of perspective as it is endurance.

It’s something to think about if you’re heading to Toast, North Carolina or Hot Coffee, Mississippi. And Californians who feel the heat in towns called Hell’s Kitchen, Volcano, Teakettle Junction and Hellhole Palms can at least take quenching relief in knowing a town called Mormon Bar is a Golden State municipality.

And who wouldn’t want a Mormon Bar for a neighbor during this summer of relentless heat?