Colma, the California town where the dead outnumber the living 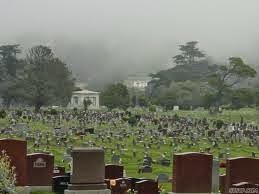 The Colma, California town motto -- “It’s great to be alive in Colma!” -- has a cryptic meaning to those who familiar with grave undertakings. In Colma, the dead outnumber the living nearly 1,000 to one.

With just about 1,600 mortal beings, the equation makes for a rockin’ town for tombstone tourists.

“We have 17 cemeteries -- one exclusively for beloved pets,” says Mayor Helen Fisicaro. “The cemeteries are like our parks. They are absolutely beautiful and people come from all over to enjoy them.”

Colma is the final resting place for more than 1.5 million deceased. She said the dead provide a living for numerous florists, landscapers, monument erectors and other businesses associated with the always thriving death industry.

Death became a Colma growth industry nearly 100 years ago when neighboring San Francisco deemed its real estate too precious to squander on the dearly departed, according to Pat Hatfield, since 1993 president of the Colma Historical Society. Suddenly, final resting places became transitory.

“All the cemeteries were evicted,” she said. “The graves needed to be moved outside of city limits.”

Okay, but why Colma?

“It was convenient,” she said. “Colma was as close as funeral homes could get and still be able to get back in one day.”

The hectic and trying relocation process resulted in what today is a community of uncommon peacefulness.

“The cemeteries are each so beautiful and all have their own personalities,” Hatfield says, adding that the cemeteries share characteristics diverse San Francisco.

Many cemeteries are like ethnic neighborhoods without the restaurants. There are Serbian, Japanese, Italian, Greek, Chinese and Jewish cemeteries.

“People are really moved by what they see here,” Baca says. “They realize there are certain things everyone has to do when any human dies. But the love people show a pet is really above and beyond.”

Mark Fontana is a Colma chiseler in the best sense of the word. His grandfather, Valero Fontana founded in 1921 the family mason business now going four generations strong.

He says he’s built mausoleums worth $500,000 and says the average amount spent on a monument is “between $2,000 and $5,000.” He hastens to add the numbers diminish the personal investment unseen in the work contracts.

“We don’t advertise and in Colma we’re always busy,” he says. “This is one of those businesses where people pay us and then they send us thank you notes. It’s very gratifying.”

Welcome to the town of Colma

A grave story about cemeteries