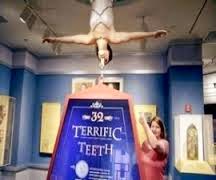 The story you're about to read deals with the tooth. The whole tooth and nothing but the tooth.

There is a museum in Baltimore dedicated to the history of the ancient and often painful practice of dentistry and the kids will love it.

And that’s the truth.

The Samuel D. Harris National Museum of Dentistry is fun, and it's funny, even if it commemorates a subject that terrifies anyone who's ever seen what Laurence Olivier did to Dustin Hoffman in The Marathon Man. And it does so in a way that can make even the most sadistic, drill-wielding madman seem kind of . . . actually nothing can make a sadistic, drill-wielding madman seem like anything but a diabolic fiend.

But it does succeed in giving a great overview of a profession that once insisted that tooth decay was created by tiny, playful tooth worms living inside bicuspid condos from whence they wreaked their happy havoc.

The museum is on the campus of the University of Maryland, home of the world's first dental school, established in 1840, and is just a short walk from Baltimore's renowned Inner Harbor. The $8-million (U.S.) museum, at 31 S. Greene St., opened in June, 1996, in a four-storey building that actually housed the university's dental department from 1904 to 1929.

Other medical museums may deal with vital organs, bodily functions and the occasional contagious disease, but the only thing infectious at the dental museum are the smiles. They are everywhere.

An iron-jawed depiction of a circus performer -- Don't try this at home! -- suspended by her legs from a trapeze and holding an enormous weight with her teeth, is the centrepiece of the room. Titled 32 Terrific Teeth, the display lets visitors know they're about to find out that teeth are capable of more than nibbling on donuts, cheeseburgers and the ears and other soft parts of a special loved one.

A display of teeth from around the world makes, well, an impression, too. Depictions of Bantu tribesmen show how those African people sharpen their teeth into menacing points to scare off enemies -- at least those enemies who aren't trained in the use of firearms. In some parts of Asia, you discover, the teeth of married women are blackened to make them less attractive to disreputable males.

You can sit in a tooth-shaped chair and see a huge tooth jukebox playing the greatest hits of cartoons and commercials dealing with dental health from the past four decades. Displays of toothbrushes and oral-care products line the walls, an early one touting that chewing gum will, in fact, eliminate tooth decay. A spiral staircase ringed with waist-high "elevators" (those doohickeys dentists use to remove broken roots) circles a two-storey display of dentist chairs through the ages.

The museum also brushes off at least one cherished American myth the way hard bristles and tight floss get rid of decay: No, George Washington did not have wooden teeth. He had bad teeth. The reason the father of his country looks so grim on those U.S. dollar bills is because his mouth was a constant source of pain and embarrassment to him. Need proof? Two sets of his actual ivory, inscribed dentures are on display on the second floor, along with a letter complaining about an improper fit.

Baltimore has lots of interesting museums that make you think, ponder and thoughtfully consider. The dental museum offers something different: It will make you smile.