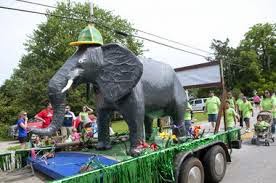 Sweet, smiling Teresa Scanlan may be the only beauty pageant queen who doesn’t flinch when someone calls her stuck up. And June 17-19 in Avon, Ohio, she’s bound to prove it.

That’s when the youngest Miss America in 90 years hopes to be crowned the first Miss Duck Tape, the flesh-and-blood representative of the ultra-sticky superstar of every home improvement project and offbeat fashion statement.

Care to take a wild guess as to the tiara’s likely construction material? (Hint: it’ll go well with her duck tape sash and duck tape bouquet).

“People think I’m being facetious, but being invited to attend the Duck Tape Festival is a dream come true,” says Scanlan, 18. “I can’t wait!”

She intends to enjoy it all: The duck tape parade floats, the duck tape fashion shows (she’s a judge), the duck tape sculptures and basking in the collegial joy of as many as 40,000 fellow aficionados who’ve helped elevate this perfectly utilitarian tool from the garage to the beauty parlor of one of America’s most vivacious women.

“It’s the greatest invention ever,” she says. “If I was ever on a deserted island and only allowed to take one thing, I’d take Duck Tape. You can hunt with it, fish with it, build with it, use it to decorate your hut and make stylish clothes. I’ve used it to make a roll-up bag for all my brushes.”

Not to be confused with generic “duct tape” but indistinguishable in purpose and composition, Duck Tape is the brand and pop culture marketing phenomenon with nearly 4 million Facebook fans who revere the cloth-backed super adhesive for its flexibility in industrial applications and fashionable prom wear.

It’s been shown to remove warts, bind broken helicopter rotors and was instrumental in saving the lives of three astronauts during the 1970 Apollo 13 flight: astronaut Ed Smylie said he felt the crew was home free when he learned duck tape was included in the tool kit.

Duck tape devotees will come to Avon, a Cleveland suburb where Duck Tape and its 350 employees reign, hoping for sunny skies, but if rain it does, you can bet there’ll be a sea of duck tape umbrellas.

“It’s a great festival and the parade’s the best,” says Tim Nyberg, who with brother-in-law Jim Berg performs as the Duck Tape Guys at home improvement shows and have combined to sell more than three million duck tape books and calendars since 1994. “It’s like the Rose Parade except instead of roses the floats are all made out of duck tape.”

He says the festival is a good-natured slice of Americana celebrating a can-do attitude enlivened with self-effacing humor.

“We all know someone who thinks he or she can fix anything with Duck Tape and this is the weekend they all go to Avon.”

And now they have the most unlikely promoter anyone who’s ever told a plumber butt crack joke could ever imagine.

Scanlan says she remembers as a girl seeing a news story about prom dresses made of duck tape and was instantly enchanted.

“It just seemed like so much fun,” she says.

And like Cinderella at the ball, it was all splendid. Then the clock struck midnight. The girl who’d been home schooled until her junior year was thrust into the tumult of unfamiliar public high school in her native Gering, Nebraska.

“I started mingling with public school kids and told them all about how much I loved duck tape,” she says. “They thought I was insane.”

That’s when the product helped Scanlan construct something essential that goes unmentioned in all the promotional brochures: It helped her build character.

“It taught me it’s okay to be different. The cool kids were all in sports. But I did what I loved and what I was good at and that gave me the confidence to continue in the performing arts.”

When asked on stage at the Miss America pageant about what made her different, she gushed about duck tape.

And the savvy marketers in the Duck Tape headquarters did something uncharacteristic: they came unglued.

“We were thrilled,” says festival organizer and company spokesperson Patti Sack. “We had a duck tape ‘Miss USA’ sash made and a bouquet of red, white & blue duck tape roses made and sent to her.”

“Rules stipulate I can only be Miss America for one year,” she says, “but I’m hoping maybe I can become Miss Duck Tape for eternity!”

Alas, the wish puts festival organizers in a kind of bind that has nothing to do with their product.

“Actually, we’ve never had a Miss Duck Tape,” says Sack, who didn’t rule it out.

After all, anything is possible. Especially with a little duck tape.

Miss America and Me