Edison exhibit at Ford Museum more than meets the eye 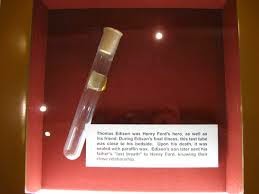 It sits there in reverential repose, perhaps the most preposterous and august oddity on display in any museum anywhere.

More than 1.5 millon people from all over the world came last year to regard it, pose for pictures with it and gape in wonder at it and all the other marvelous exhibits at the Henry Ford Museum in Dearborn, Michigan.

Well, a picture might be worth a thousand words, but 10,000 cameras found not capture its transparent essence.  Instead here are 14 words that can:

It is the invisible stuff you’re staring through to read what’s on this page.

So why would anyone need to go to the massive 12-acre Ford Museum to “see” a test tube of air? Well, according to the display, this is legendary air. The sign reads:

“Edison’s Last Breath? It is alleged that Henry Ford asked Thomas A. Edison’s son, Charles, to collect an exhaled breath from the lungs of Ford’s dying hero and friend. The test tube was found at Ford’s Fair Lane mansion, along with Edison’s hat and shoes, after Clara Ford died in 1950.”

According to Edison biographer Neil Baldwin, the revolutionary inventor spent his last years as a cantankerous sort of mess. The elderly Edison was deaf, did not bathe more than once a week chewed tobacco continuously, smoked several cigars a day and the only nourishment he consumed was milk with an occasional glass of orange juice.

Clearly, if it is Edison’s last breath then it’s a good thing it’s contained in a sealed tube.

I called Balwin to learn more. Despite his vast knowledge about the lives of both men — he’s also written books on Ford — he pleaded ignorance.

“I wish I could help you more,” he said. “All I know is that Ford worshipped Edison. He was sort of a surrogate father to him. When he recreated Edison’s Menlo Park laboratory for his Greenfield Village outdoor museum, he took a 3-foot deep plot of soil from Menlo Park to build an authentic foundation for the replica.”

Baldwin said Ford was an “obsessive and idiosyncratic collector,” and it wouldn’t surprise him that he would want something so vital from Edison as his last breath.

We said goodbye and I called Bill Pretzer, a curator at the Ford Museum. He graciously told me I could have Edison’s last breath, but only if I could promised to give it right back

It turns out the capture of Edison’s last breath is rather pedestrian. No one ghoulishly shoved a test tube up the dying inventor’s nose. Rather, Edison, who always considered himself foremost a chemist, was comforted by having reminders of his past endeavors around him in the room.

These included a set of eight open test tubes in a rock on a table beside his bed.

Immediately after his death, the tubes were corked and sealed with paraffin. One was sent to Ford and, following his 1947 death, was placed in a warehouse box where it languished until an intern named Steven Hamp found it in the early 1980s.

Whether one had anything to do with the other is unknown,” Pretzer said, but after the discovery Hamp went on to marry Henry Ford’s great-granddaughter, Sheila Ford Hamp, and in 1996, Steven Hamp became president of the museum.

It is unknown what happened to the other seven test tubes and if they, too, like genies’ bottle, proved as coincidentally fortunate as the one found by Hamp, today a successful and respected historian and administrator.

Chances are they have been lost forever and the famous air within has been returned to the ocean of common atmosphere in which we’re all inhabitants. Who knows?

The answers might very well be blowing in the wind.