Fairmont hotels going to the dogs -- and pet lovers are thrilled 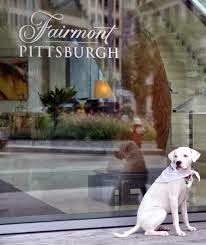 You’re one lucky pup if in today’s economy you can flunk out of school, do time in prison, and still land a cushy job, one you can snooze through and still be lavished with praise and gourmet treats just for being agreeable and not pooping all over the floors.

Yeah, nice work if you can find it.

Oh, and it helps if you’re a real bitch, too.

If so, you may want to zip a resume straight over to Fairmont Hotels & Resorts. The hotels are on a bona fide hiring binge of fidos who prefer bones to bucks.

The hotel has unleashed a movement to appeal to animal lovers by stationing lobby dogs in many of their more than 60 upscale properties around the world.

The newest is Edie in Pittsburgh. The name’s a nod to Edie Sedgwick. She was Andy Warhol’s “superstar,” and is featured in hotel artwork and exhibits throughout the nearby Andy Warhol Museum.

“Her main job is to just sit around and be cute,” says Julie Abramovic, spokeswoman for the 18-month-old Pittsburgh hotel. “She has such a soothing effect on our guests. We’re a pet-friendly hotel and people are delighted to walk through the doors and see a dog just roaming around the lobby.”

The 50-pound boxer/lab wears an employee name tag and keeps an appointment book for guests who wish to sign up to take her on 20- to 30-minute jaunts around Pittsburgh’s Golden Triangle.

Edie gets to sleep around.

“Yes, she goes home with me every night,” Abramovic says, “but if I ever go away I have a whole building of employees who want to take her home with them.”

What do you expect from a dog who flunked out of advanced obedience training for being “too social.”

“We tried to teach her to get her to do simple tasks, but she had zero work ethic,” says Marlys Staley, executive director of the Circle Tail companion dog training near Cincinnati. “All this dog ever wants to do is schmooze.”

Found wandering the streets, the malnourished dog was taken to a local shelter where her joyful manner attracted Staley. She took her to Circle Tail to heal and train, part of which involved several months in Ohio prisons where approved inmates work to socialize once-neglected animals.

With Edie, they succeeded a little too well.

“She’s brightens all our days,” Abramovic says. “It’s so fun to hear all these professional business people, even our own executives, using their baby doggie voices around Edie. Everyone loves her.”