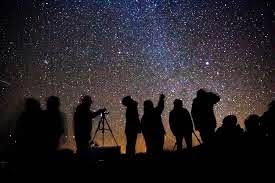 It could be argued it is the one theological realm in which mankind has truly distinguished itself.
“Let there be light!”
Oh, you betcha.
But what started as a truly bright idea is robbing earthlings of one of our most pristine pastimes: laying on our backs and gazing up in wonder at the star-studded heavens.
Rampant development over the last decade chewed into a darkness that was once rich with celestial sparkle.
“The past 10 years have brought a degradation of star visibility in almost every major city in America,” says Bob Parks, executive director of the International Dark-Sky Association.
Instead of looking straight up, many Americans now have to get in their cars and drive if they want to see splash of stars.
But Parks said those who study light pollution and “light trespass” -- light going where it’s not invited and doesn’t belong -- are finding surprising and encouraging trends in the field.
“There’s a dawning awareness that there are sound economic, safety and quality of life issues to reducing light pollution,” he says.
“Not many elected officials will say they care about light pollution, but they all care about reducing energy costs to already tight budgets. When they learn they can cut the cost of their outdoor lighting budgets by 30-40 percent by buying reducing the amount of light that goes where it doesn’t belong, they listen.”
Today, more than 70 percent of all commercial light fixtures sold feature full cut off hoods that reduce light pollution while maintaining safety illumination features, he said.
That’s good news to avowed stargazers like Boulder, Colorado’s Jeff Kanipe, author of “Cosmic Connections: How Astronomical Events Impact Life on Earth.”
“Most people have never even seen the Milky Way,” he said. “And when they do, they are just stunned. Seeing a sky full of stars in high summer is a tremendous joy. It’s something you never forget.”
Here’s Kanipe’s list of some of the best places in the U.S. to see stars.
Cherry Springs State Park, Pa.− The 48-acre park, one of just eight International Dark Sky Parks, treats pure darkness the way jewelers treat gems − like it’s something precious. Cherry Springs is situated amidst the 262,000-acre Susquehannock State Forest and features some of the darkest skies on the East Coast.
Sky Meadows State Park, Va. − The aptly named Sky Meadows is just an hour’s drive from the nation’s capital and presents a black canvas upon which celestial objects can dazzle.
Big Pine Key, Fla. − Night skies here will look alien to most North American terrestrials. It’s the only place in the continental U.S. where stargazers can spy the Southern Cross and other features familiar to equatorial dwellers.
Eagle Harbor, Mich. − This Keweenaw Peninsula is just a little lick of land that juts out into Lake Superior towards Canada. The only lights to distract you from mesmerizing auroras and star splashes are on passing freighters.
Canyon of the Eagles Lodge and Nature Park, Texas − Home to the Eagle Eye Observatory about an hour north of Austin, the canyon’s a great place for pros and amateurs alike.
Bryce Canyon National Park, Utah − Stargazing here during a monthly new moon is as close as you’ll get in the continental U.S. to viewing the stars the way the cavemen did.
Anza-Borrego Desert State Park, Calif. − The park is 600,000 acres of splendid desolation just two hours east of San Diego. The weather here − moderate temperatures and low humidity − combines with the lack of light to give the skies a truly starring role in evening entertainment.


Kanipe suggests those interested in reducing light pollution check out the International Dark-Sky Association to help lead America to a precious kind of Dark Age to which we should aspire.
Posted by Chris Rodell at 12:28 PM