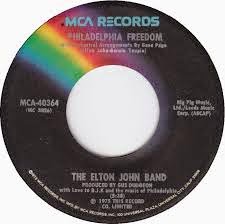 If your city were a song, you’d want it to be upbeat, symbolic, historical, enjoy a catchy melody and, yeah, sure, have it be one of Elton John’s greatest hits.

So Philadelphia hit the jackpot in 1975 when, as a favor to a friend, the world’s most popular singer songwriter and his lyricist came up with a song that 36 years later remains a musical love letter to a city renown for Ben Franklin and Rocky Balboa.

More on that later. First, here are five other songs about five other cities who were enhanced by musical mention.

• “Cleveland Rocks,” Ian Hunter, 1979 -- From his album, “You’re Never Alone with a Schizophrenic,” Hunter said it irked him that people derided a city he thought was cool. “They said Cleveland was uncool and L.A. and New York City were cool,” the Englishman told reporters. “I didn’t see it that way. Cleveland had a lot of heart.” Hunter helped change the perception. So did Drew Carey, from 1995 through 2004, the star of the Cleveland-based “Drew Carey Show,” which in the third season began opening with a city montage feature Carey and co-stars (including late night host Craig Ferguson) lip synching “Cleveland Rocks!” Today everyone knows Cleveland rocks. Since 1986, Cleveland’s been home to the Rock ‘n’ Roll Hall of Fame.

• “Viva Las Vegas,” Elvis Presley, 1964 -- “This song will always be the best song about Las Vegas because it touches all the reasons why people love coming to Las Vegas,” says Dr. Michael Green, professor of history at the College of Southern Nevada. “And it’s the only song that’ll ever be sung by the man most closely associated with Las Vegas, Elvis Presley.” It’s the title song from the movie of the same name, the one that features the sizzling on- (and off-) screen chemistry between Presley and co-star Ann-Margaret. Peaking at a lackluster -- for Presley -- no. 29 on the charts, the song and the city have become inseparable, earning inclusion in dozens of soundtracks and being covered countless times, including by Ann-Margaret as Ann-Margrock in the 2000 film “The Flintstones in Viva Rock Vegas.”

• “I Left My Heart in San Francisco,” Tony Bennett, 1962 -- As much a vivid cityscape as a song, Bennett said the tune “helped make me a world citizen.” It did the same for San Francisco. With its wistful vignettes about little cable cars climbing halfway to the stars and foggy air chilling the city by the bay, it’s a melodic parade of postcards, a song about not being there that somehow makes everyone feel like we’ve never left.

• “Do You Know The Way to San Jose,” Dionne Warwick, 1968 -- Rand McNally couldn’t have done a better job of putting a single city on the map. It’s the song that helped launch a million NoCal-bound conventioneers. “It’s amazing how a song can still resonate from all those years ago,” says Meghan Horrigan, spokesperson for local visitor’s bureau, Team San Jose. “It has a way of making what is the 10th largest city in America seem like a friendly small town where everyone feels like they belong.” Even people competent with precise GPS directions find it impossible to not get lost in a dandy little lyric.

• “New York, New York,” Frank Sinatra, 1979 -- This now-indelible song about one distinctive East Coast city has the audacious feel of a national anthem. Originally written for Liza Minelli in the 1977 Martin Scorsese/Robert DeNiro film of the same name, it was left to Sinatra to give it its signature swagger. As brash and robust as the city it describes, the song conveys all the excitement and electricity Manhattan means to the world. A city that never sleeps? With this song as its enduring theme, New York, New York, acts like it never even needs a nap.

• “Philadelphia Freedom,” Elton John, 1975 -- If for the past 36 years you’ve been thinking this song is about liberty, Founding Fathers and the Declaration of Independence, you are wrong. It’s a declaration of Elton John’s love for tennis and Billy Jean King. “The reason it will always work so well for Philadelphia is because people hear it and they think it’s about Philadelphia’s role in so many historic struggles for freedom,” says Cara Schneider of visitphilly.com. “The song was written for his good friend, Billy Jean King, of the Philadelphia Freedoms tennis team.” Today the song’s enduring popularity makes it as much a part of Philadelphia as Ben Franklin and Rocky Balboa.

Email ThisBlogThis!Share to TwitterShare to FacebookShare to Pinterest
Labels: do you know the way to san jose, Philadelphia Freedom, songs about cities, Viva Las Vegas