Pittsburgh: bridge capital of the world 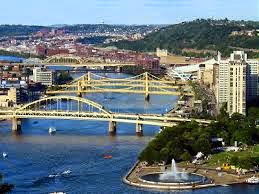 This marks the 25th year in row the finest bridge engineers in the world will cross the golden bridges spanning the Allegheny, the Monongahela and the Ohio rivers to discuss their craft. They’ll come from more than 12 countries as far as China and from 40 states to Pittsburgh.

They don’t go to Venice, Vegas, Hong Kong or Paris.

They come to Pittsburgh. Again and again.

This will be the tenth consecutive year London-based Helena Russell, editor of Bridge Design & Engineering, has covered the bridge conference in Pittsburgh.

“Yeah, after all these years us conference veterans think it’s a bit like  Bill Murray’s ‘Groundhog Day,’” she says, “but Pittsburgh's absolutely perfect for the conference. Just the drive from across the Fort Pitt Bridge from the tunnel at the base of Mt. Washington and to see the downtown area is so dramatically revealed makes it worth the trip.”

The view Russell’s describing has led observers to call Pittsburgh the only city in the  world with a grand entrance.  It’s been said that if Pittsburgh were in Europe, Americans would be racking up frequent flyer miles to visit a city so beguiling. Instead, Pittsburgh’s been long freighted with long-ago vanquished memory of an industrial city where smokestacks and pollution reigned.

But anyone who still fails to appreciate the long-term benefits of quitting smoking ought to take a trip -- doctor’s orders -- to the The Steel City. Once disparaged as “Hell with the Lid Off” because of its crush of smoke-belching factories, Rust Belt realities forced Pittsburgh to quit cold turkey 25 years ago. Today it’s as fresh and green as a salad bar. Skies once choked with smoke now crackle with free citywide WiFi. The city boasts the third most “green” certified structures in America, foremost being the David L. Lawrence Convention Center, opened in 2003 and soon designated as the world’s largest “green” building for its ingenious use of sunshine and natural ventilation to warm and illuminate the interior.

In fact, the only likelihood of seeing smoke will come from celebratory birthday cakes weighted with 250 candles, one for each year since Pittsburgh’s 1758 founding by redcoat Gen. John Forbes and named after British Secretary of State William Pitt the Elder.

Today, as then, the city is geographically incarcerated by the waters of the Monongahela, Allegheny and Ohio rivers. The only direction downtown can sprawl is straight up.

The geographical imperative means the surfeit of bridges provide vital access. Consider: the sprawling metropolis on the island of Manhattan has 10 bridges linking its seven million residents to the world. Downtown Pittsburgh, a city of just 325,000, has 15 of just about every imaginable type -- suspension, girder, truss, rigid frame, cable stayed and arch -- right downtown.

The most alluring, according to the experts are the Sixth, Seventh and Ninth street bridges. They are America’s only trio of consecutive identical bridges, and make an eye-catching set of golden necklaces from many of the city overlooks the crown the city.

“That trio of bridges is spectacular,” Russell says. “Seeing those three identical yellow suspension bridges with their simple yet elegant structural forms against the background of the high rise buildings of Pittsburgh is always a true visual pleasure."

In fact, the bridges, nicknamed “The Sisters,” are so captivating New York architect Rafael Vinoly dashed from his cab to sketch the design and used it as “Eureka!” inspiration for the  sweeping roof that is the hallmark of the gleaming convention center. A winding path between two walled waterfalls divides the building and is one of the city’s coolest places in every sense of the word.

At rush hour, the Sisters’ sidewalks across the are crowded with pedestrians who opt for cheaper cross-river parking and a healthy hike to work. A 2007 Brookings Institute study said Pittsburgh is the ninth most walkable of 30 U.S. cities, and places ahead of New York, San Diego and Philadelphia in that category. The study takes into account that Pittsburgh is America’s urban Everest. The city has 738 sets of city-maintained steps with 44,645 treads that measure roughly 24,000 feet. By comparison, San Francisco has just 350 sets.

In an unintentional nod to tolerance, the city approved sex changes for two of The Sisters, honorarily naming them after Roberto Clemente and Andy Warhol, famous Pittsburghers who enjoy more magnificent monuments steps from their namesake bridges.

Opened in 1994, The Andy Warhol Museum (www.warhol.org) ensures that America’s King of Pop Art, a Pittsburgh native, will enjoy more than 15 minutes of fame. It is the largest museum in the world dedicated to celebrating the works of a single artist. Recent notable guests include Dennis Hopper, Mick Jagger, Bono and that perfectly Warholian celebrity, Monica Lewinsky.

A striking statue of Clemente sits outside PNC Park, dubbed by ESPN The Magazine in 2005 as the number one ballpark in America. It’s so beautiful it’s being tagged for duty by people who never hope to strike out: brides and grooms. The park hosts more than 30 weddings year round when the home team Pirate are on the road.

You can see the stadium light towers from parts of Pittsburgh’s Strip District, a place that sounds like it ought to be rated X. Instead, rate it  “Mmmmm.” It’s yummy and there’s nothing to make you blush. The Strip is named for the low “strip” of warehouses and lofts that make up the thriving mile-long district that throbs with commercial activity. As Pittsburgh’s most ethnically diverse neighborhood, The Strip offers open markets, butchers, cheese, spice and fish shops and the accents, Old World and New, that give Pittsburgh so much vitality.

Each of these venues offer distinctive neighborhood bridges and views. But the most perfectly Pittsburgh place isn’t even in the city. It’s above it. It’s Mt. Washington is the majestic city overlook named by USA Today travel writers in 2003 as the second most beautiful vista in all America (second only to Red Rock Country in the Sedona Desert and ahead more romantically-reputed scenic spots in Hawaii, The Grand Tetons and the Florida Keys).

The scenic perch is home to the city’s distinctive Monongahela and Duquesne inclines. These famed little landmarks have been dutifully plodding up and down the steep hill Mount Washington since 1877. They’re still fulfilling the utilitarian duties of delivering pedestrians, but most riders are tourists who ride the inclines up from the riverside Station Square shopping and entertainment complex then stroll the aptly named Grandview Avenue,  a mile-long stretch of overlooks and cliff-clinging restaurants that scenery along with sumptuous fare.

Each has its share of accolades, but The LeMont (412 431-3100,  www.lemontpittsburgh.com), a AAA 4-Diamond winner, is the granddaddy of all them all. Transfixed diners stare out the floor-to-ceiling windows at a city that once again is a really smokin’ place, a once-pejorative term whose meaning has evolved over the years, only slightly less dramatically than Pittsburgh itself.