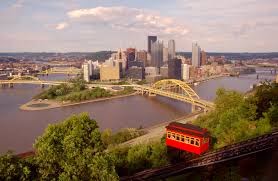 Pittsburgh promoters still like to point to an heirloom accolade by distinguished New Yorker essayist Branden Gill who came to observe the transformation of the city once disparaged as “Hell with the Lid Off.”

“If Pittsburgh were situated somewhere in the heart of Europe, tourists would eagerly journey hundreds of miles out of their way to visit it,” Gill wrote in 1989.

Two of the many things that have happened since then: the whole world’s begun coming to Pittsburgh -- it hosted the G-20 Summit in 2009 -- and the people at VisitPittsburgh.com are having trouble tracking all the fresh accolades that seem to daily flow into their offices.

“Hearing praise for this great city never gets old,” says Craig Davis, VisitPittsburgh’s vice president of marketing. “But this was a wonderful surprise.”

National Geographic Traveler in its current issue lists Pittsburgh as one of the world’s 20 must-see places to visit. It is the only U.S. city listed and just one of four cities on the entire planet (along with London; Belfast, Northern Ireland; and Dresden, Germany. Other must-sees are either regions or nations; Sonoma, California, joins Pittsburgh as the only American destinations.

The article touting Pittsburgh’s attributes reads: “Its mourning for its industrial past long concluded, this Western Pennsylvania city changed jobs and reclaimed natural assets: a natural setting that rivals Lisbon and San Francisco, a wealth of fine art and architecture and a quirky sense of humor.”

The flattering notice qualifies as a whopper even by the standards of a city that in the past five years has become accustomed to hearing top news organizations and travel magazines declare it among the most livable, most affordable, safest, most secure, most literate, greenest, friendliest, and prettiest, to name just a few.

It’s like in the last 20 years this once ugly industrial duckling has emerged to become America’s Homecoming Queen.

Pittsburgh is renown for its championship sports teams and their spiffy new venues (ESPN named PNC Park as baseball’s best), its Andy Warhol and Carnegie museums, National Aviary, and for a geographic setting that is truly captivating -- the city’s three rivers incarcerate its Golden Triangle; the only direction downtown can sprawl is straight up.

Davis says the city sells itself when he takes visitors and prospective conventioneers up one of its landmark inclines to enjoy the view from one of the cliff-clinging fine dining establishments atop Mt. Washington, named in 2003 by USA Today travel writers as the second most lovely vista in all America.

Award-winning global travel writer Christine O’Toole nominated the city she calls home and authored the article after for years hearing Pittsburgh’s reputation rise around the world.

“Travelers where ever I go are always looking for authentic cities with real personalities,” she says. “That’s Pittsburgh. European visitors in particular are always impressed by this city. The smaller scale and historic riverfront reminds them of the charming inland cities there.”

Email ThisBlogThis!Share to TwitterShare to FacebookShare to Pinterest
Labels: best places in Pittsburgh, Pittsburgh is no. 1, Pittsburgh most livable, Pittsburgh Steelers, PNC Park no. 1, VisitPittsburgh.com