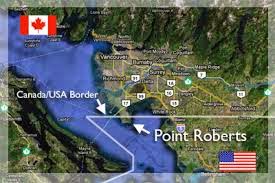 The last significant crime here almost sputtered to a sloppy conclusion due to lack of anyone willing to play the necessary role of victim.

A would-be robber threatened the local tavern owner who recognized the masked crook and told him to get lost. The bandit sheepishly complied and then went to the town’s only gas station where the dawdling clerk took so much time the town’s only part-time lawman happened to mosey by in time for the last criminal arrest anyone can remember.

“The guy was just stupid,” said Nick Kiniski, a former professional wrestler who is today a Point Roberts, Washington, businessman and local fire chief. “On The Point, everyone knows everyone else. And besides, where was he going to go? There’s one road in and out and it’s practically fortified. There is no escape from The Point.”

Welcome to Point Roberts, Washington, a Gilligan’s Island that is all Gilligan and no island.

Point Roberts is the only place in contiguous America where Americans have to leave America and display a passport just to get back into America. It has a nose bleed zip code (98281), and anyone who takes the time to spy it on a map might think it looks like America’s tiny asterisk.

In a sense, that’s exactly what it is. To even appreciate its existence, map readers will need a magnifying glass and a sleepless curiosity. Surrounded on three sides by salt water and less than five square miles in all, this scenic little lick of land is home to 1,200 year-round residents who should by all logic be Canadians but became fractionally American by institutional indifference.

In 1846, the Treaty of Oregon set the border between Canada and the United States directly on top of the 49th parallel clear to Vancouver Island. It was all very neat and tidy. A manly hiker could walk dead west about 1,400 miles from Minnesota to the Pacific Ocean with his right foot in Canada and his left in the U.S -- clear to Blaine, Washington. But that wasn’t the end of it.

The boundary extension to the eastern shores of Vancouver Island, British Columbia, meant the hiker would need to plunge into the frigid waters of Boundary Bay and hike undersea for 10 miles until he arrived on U.S. terra firma on Point Roberts.

Local realtor Jim Julius said efforts to correct the mistake were rebuffed: “An English commissioner at the time noted that Point Roberts was just kind of stuck out there and maybe it would make sense to jog the border around this little peninsula, but none of the Americans ever responded. There was trouble between the English and the Americans and the Americans just didn’t want to be bothered.”

The oversight led to plenty of daily bother more than 150 years later. “Oh, it can be a real pain,” said Point Roberts librarian Kris Lomedico. “All the doctors and department stores are over the border in Canada and it’s worse if you need anything to do with our (Whatcom) county government. They treat us like a red-headed step-child, like they’d rather we didn’t exist. It’s about 30 minutes across both borders to Blaine and then another 20 minutes to Whatcom County Courthouse in Bellingham. Since 9-11, the border crossing at Blaine can get really backed up. It can take hours to cross the borders.

“But really, we love it here. With the border and one way in and out, it’s like we’re living in a really exclusive gated community.”

“We have the lowest crime rate in the entire United States,” says Julius. “We have the U.S. Customs and Immigration stopping and asking for ID of everyone coming in to Point Roberts. Our isolation protects us.”

It also enriches them. Finite coastal property is at a premium near Vancouver (the Vancouver airport is conveniently 16 miles away, just a $30 cab ride from The Point). Julius says a lot in Lawson, British Columbia, hard on the border, would cost $220,000. Just 50 feet away in Point Roberts, that same lot would cost just $38,000.

The Point also features a wonderful new golf course where, at least on one hole, an errant shot could lead to more than a 2-stroke penalty. It could be an international incident.

Point Roberts Golf & Country Club opened in July 2004. The designers had to re-route three holes on the sylvan splendor to preserve three enormous eagle nests. Big as wicker bathtubs, the eagles aren’t the only guaranteed birdies you’ll see. The course is built adjacent to a national wildlife preserve that is home to a rookery of more than 400 blue herons. On the border-hugging course’s par 5 14th, the U.S./Canadian border serves as O.B.

On the eastern shore, children on Maple Beach enjoy dancing across the border shouting, “America!” and then taking a step to the north to shout, “Canada!” When the tide’s out at sandy, peaceful Maple Beach, beachcombers can stroll nearly a mile out to flats. And it’s so shallow that even when the tide’s in, the waters are warmed by the sun-baked flats.

Plus, like most all of Point Roberts, it’s a great place for feeling lonely.

Canadians can visit and stay less than six months, but their primary residence has to be in Canada, it’s an exchange proud native Canadians are loath to do so Point Roberts remains home to just 1,200, only 400 of whom are voting Americans.

The land their votes shape is decidedly sparse, and that’s the way it’s going to stay.
There is no sewage and the “un-islanders,” as they call themselves, are fiercely resistent to any zoning changes that would allow a flood of development to change the way of life on what is an idyllic un-island where the rainfall totals are almost as low as the crime rates.

The land mass is so small the clouds scoot right over before bundling up against the imposing Cascade mountain range and dumping on the dreary Northwest. With such beautiful weather, scenery and placid conditions, you’d think the people of Point Roberts would be some of the most contented and serene any where “in” America.

Kiniski said he’s never been in an environment where there were more arguments and fights than in Point Roberts -- and Kiniski was a professional wrestler in the World Wrestling Federation. He engaged in chair-swinging, hair-pulling melees with the likes of Hulk Hogan and Jake the Snake before leaving the circuit and opening The Reef bar and restaurant in Point Roberts in 1988.

“Yeah, in the WWF, the fights were all in the ring,” he says. “On Point Roberts, I’ve seen fistfights break out at water board meetings. You’ll never see people argue like they do here. You’ll see middle-aged people arguing seriously about stuff that happened back in grade school. Everyone knows everything about everyone else on Point Roberts. Man, I drive down the road and my arm gets sore waving to people. Everyone knows everyone.”