Any way you slice it, NYC pizza often named Ray 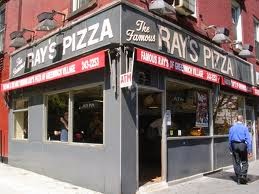 There is but one place on the planet that allows travelers to immerse themselves in nearly all the world’s authentic global cultures without flashing a passport.

Chinese, Belgians, Koreans, Russians, Pakistanis -- everyone comes craving a slice of the pie.

So how come in a city of such dazzling diversity, about the only guys truly rolling in the dough -- the city’s pizza makers -- go by the name Ray?

A quick computer search reveals the name Ray appearing in more than 56 Manhattan pizza restaurants with 24 distinct variations including the words Ray, Famous or Original.

In New York, if you really want a slice of the pie, chances are good it’ll be sold in a place that includes the name Ray somewhere on the marquee.

And, even more amazing, it appears there is no real Ray, famous or otherwise.

Reporter: I’d like to talk to Original Famous Ray, the owner.

R.: Then why’s it called Original Famous Ray’s if the owner’s Phil?

Tracking down the real, original, famous Ray is a quest fraught with cruel confusion. Even a place that sounds most like an authentically named Ray, Ray Bari Pizza, deceives.

“No, my name is Joseph. I bought a Ray’s Restaurant at 76th Street and 3rd Avenue in 1973. We kept the name and started making great pizzas that brought traffic to a stop. We’re the original, famous Ray’s pizza.”

One prevailing theory says Ray’s Pizza at 27 Prince Street in Little Italy was the original. It was opened in 1959 by a Ray-resistant man named Ralph Cuomo, who was alleged to have had connections to the Lucchese crime family and in 1969 was convicted of heroin trafficking.

Clearly, a little name chicanery might not have been beyond his ethical boundaries.

Others say Rosolino Mangano instigated the Ray-mania when he in 1964 purchased a second Ray’s at 1073 First Avenue that had been owned by Cuomo and began a spree of Ray-named pizzerias.

What they all have in common is an insistence that each is the first, the finest and that the rest are just a bunch of Ray come latelies whose shoddy pizzas are ruining the proud Ray name.

The only owner with a variation of Ray in the name who’s clearly telling the truth is Rudy Krukuti, owner of Not Ray’s Pizza at 690 Fulton Street in Brooklyn. His son, Nick, says his Albanian father wanted to differentiate his shop from the rest of  the Rays when he opened in 1989.

“It helped us stand out,” he says. Yet in some ways, Not Ray’s is full of more famous Rays than the originals. One inside wall is decorated with pictures of famous Rays like Ray Liotta, Ray Charles and former “Family Feud” host Ray Combs.

The New York-centric conundrum will be familiar to “Seinfeld” fans from “The Maid” episode from season nine, April 30, 1998, when sidekick Cosmo Kramer gets lost deep in Manhattan and frantically summons Jerry for help.

Kramer: “I'm lookin' at Ray's Pizza. You know where that is?”

His manic frustration is perfectly understandable.

Determined to divine the real original Ray, it was time to call the Real Original Famous Kramer, Kenny Kramer, the real life person upon whom “Seinfeld” co-creator Larry David based the wacky Cosmo Kramer character.

He’s still guiding “Seinfeld” reality tours and said he was “having as much fun for as little work as possible.” He remembers the episode and its inspiration.

“Yeah, I thought that was funny,” he said. “Larry and I were always joking about all the Ray’s pizza places.”

So what gives? Where is the original Ray’s pizza that’s so famous?

“The first guy to do business as Ray was on John Street in Little Italy and he’d been there about a million years,” he said. “But the guy who became famous for putting excessive amounts of cheese and toppings -- real heart attack slices -- was Famous Ray’s Pizza at 465 E. 6th St. in Greenwich Village. That’s the original, famous Ray’s. It was so good and famous that people began ripping off the name.

“It’s still the best,” he said. “I think they got a deal with some cardiologist. The pile it with so many toppings they ought to give you a free bypass with every 10 cuts.”

At 66 and about to embark on a cruise to New Zealand, Kramer says he is more careful about his diet than he used to be, but says he still bows to yearly cravings and makes his way to 465 E. Sixth, for the true, the original, world famous Ray’s pizza.

Answering the phone at Kramer’s designated Ray’s Pizza was a man whose first name reads like a tantalizing typo.

“My name is Raj,” he says. “They tell me this is the original Ray’s, but only the owner could tell you that for sure.”

So the owner of the original famous Ray’s remains elusive. It could be Ray, Fay, Kay, Trey -- who knows?

Maybe it’s a descendant of another famous New York original, Fay Wray, the actress who broke the heart of the famous original King Kong.

Either way, finding out will take determination from investigators who are unafraid of pizza guys making monkeys out of them over a bunch of fake Rays.