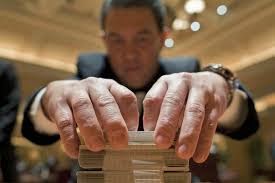 The flashbulb frenzy unleashed on Ben Affleck’s entrance to Caesars Palace is ferocious enough to make it appear the handsome actor’s existence is illuminated entirely in semi-second strobe. His dazzling fame grants him wealth, fawning attention, his pick of the world’s most beautiful women and the occasional permission to glance in the mirror and innocently wonder, “Am I a god?”

David Rotz observes the kleig-lit confusion with a bemused look on his goateed face. He knows the real thing. They’re on a first name basis. A Las Vegas limo driver for 30 years, he is standing at military attention outside the back passenger door of his Lincoln town car waiting for Him to approach. When He does, Rotz will open the door with his left hand as his right magnetically rises to discreetly palm a $100 bill. The lucrative process will be repeated five times that night.

“Yeah, he’s a great guy,” Rotz says. “A family man. Worth a mint. He made a fortune peddling pornography over the Internet.”

It’s sublimely appropriate that god in Las Vegas is a smut merchant. It’s a city that would dearly love to sell its soul if only it had one. Cities with souls, like people, will judge you on how you dress, where you live, how much you earn, if you appear loose or uptight. Not Vegas, a town where locals still wax nostalgic for the days when the mob ruled and was celebrated for being straight-shooters when it came to justice and the bullseye dispensing of it. Today, everyone of the 37.4 million annual visitors is treated exactly alike: they are either the richest person in the world or is the verge of instantly becoming him or her. You don’t need to be Affleck, Jack Nicholson or, gadzooks, Paris Hilton, to be treated like royalty -- and there are pedigreed royalty who do not receive the posh treatment showered on men like the friendly e-pornographer. All you need to be is one whale of a guy.

Whales are the men (rarely women) who thrill to play the highest stakes casino games and have the ample means to do it. They are men like Australian media mogul Kerry Packer whose estimated fortune runs to $8 billion. Rotz still talks about the March 31, 1992, evening when Packer stormed into Caesar’s Palace and gambled so recklessly that his winnings cut into the first quarter earnings of  Caesar’s World, the casino’s parent company, by 50 percent, or 37 cents per share. He’d dinged them for $9 million, enough to personally sink the company stock 37 cents per share. But his luck turned before dawn and Caesar’s World stock started the second quarter with a profitable flourish.

By all regards, Packer -- reckless and wealthy beyond measure -- is a whale of whale. There are fewer than two hundred bona fide whales roaming the casinos. Even though they are the most ruthlessly hunted animals on the planet they are in no danger of becoming extinct. In fact, the spread of  little league casino gambling and popular televised poker means whales are thriving as never before. And casinos are on a whale hunt so maniacal it makes Captain Ahab and the boys from the Pequod look like grandpa and his troop of worm wigglers out for pond trout. It’s no exaggeration to say that F.B.I. profilers seeking serial killers are less motivated than casino floor profilers hunting whales.

“The high rollers at the Venetian account for 80 percent of all our gaming revenues,” says one exec. The number astounds. That means that all those slot machines with their bleary-eyed Indianapolis bingo hall refugees are mere blue-haired window dressing for the real reason that 15 of the world’s 20 largest hotels -- 135,000 rooms; nearly equal to New York and L.A. combined -- share addresses along the Las Vegas Strip.

Many whales pick their hotels based on the same reasons they chose their first wives. The Palms and The Hard Rock for passion and the most beautiful women; Caesars and Bellagio for their refined airs of elegance; Mandalay Bay for a daring  nature. The MGM for its audacious grandeur. Many gamblers are picking the new Ritz-Carlton at Lake Las Vegas the way they did their second wives: it’s a comfortable place to settle down. It features a Tuscan-themed casino and a Tromp l’oleil village with Da Minnci jewelers and gourmet ice cream. A thirty minute-drive from downtown, it’s the first Vegas hotel to offer Vegas as an amenity like golf or skeet shooting.

Some whales go to Vegas to cheat on their wives, but only fools will cheat on their sponsor hotels. Customer loyalty is rewarded with the most fabulous perks the world has to offer. Repeat whales at the Venetian get free Gulfstream charter jets, Alaskan fly fishing trips, the finest meals, and posh, private gambling dens with boxes of $100 Fuente Opus X cigars, cases of $1,500 Louis XIII scotch and a timeless eternity to win or squander a fortune. Your luck runs cold and you can retire to one of three the President’s Suites they charge non-gamblers  $10,000 per night to enjoy. The even more elegant 7,900-square-foot Chairman’s Suite and its 18 rooms and 38 plasma screen, 3,000 channel TVs has no price. It’s never been sold for even a single night. It is reserved for the largest of whales and its Oriental accents speak to the pre-dominant heritage of the recipients.

All free, just as long as you sustain the action.

Rotz has patiently chuckled at blustery first timers who expect a $50,000 line of credit will earn them high roller status. “My friend,” he says, “The high roller bracket starts at about $2 million gamblers.”

That’s one weekend of tables groaning with chip denominations that range from $5,000 to $250,000. Single blackjack hands of $50,000 are routine and don’t provoke so much as a gentle, “Dang,” from the losing gambler. Seasoned whales will gamble for eight straight hours, sometimes longer, against house dealers who are required to take 20 minute breaks to maintain peak mental agility. Some gamely continue through arctic cold streaks while others fold at the first hint of bad luck. Entertainment and dining aren’t considered cheating and your casino will comp you to see Cirque du Soleil’s Zumanity at New York-New York or dine at the sublime Bradley Ogden at Caesars. What they won’t do is find you a $1,500-a-night call girl. That could land them in front of the the Nevada Gaming Commission. Ask Dave

Only in Vegas can losing mean winning. Blow $2 million at Mandalay Bay and you might find a new $100,000 Lexus waiting in your driveway. Do the math.

The bigger the loser, too, the better the perks. Dan was a San Diego mortgage refinancer during the boom-boom ‘90s. While relaxing in slate-walled hot tub at Mandalay’s spa, he told of the week he earned $40,000 and him and a buddy headed west for a splurge and a single all-or-nothing bet on black.

It came up red. “The pit boss and his supervisor both busted out laughing. The supe  put his arm around me and said, ‘Kid, I admire your guts. We got a real nice suite for you. So I lost $120,000, but I got a great story out of it and had a wonderful time. Man, my wife didn’t talk to me a for month.”

His ex-wife, he corrects. He’d never have the nerve or the means to wager like that again. But at one time, he did.

Most of us will never know what it’s like to get the “swing away” sign with the bases loaded in the bottom of the ninth in an October Game 7 against the Yankees. Brett Favre will never lock eyes with us in the huddle and say, “Man, it’s all up to you. On three!”

But, God bless America, any one of us can walk into a dazzling Las Vegas casino and put everything we own on one turn of the card in a make-or-break wager that will vault us to Easy Street or, literally, the street. This city of dreams sprung up in the middle of desert so godforsaken wagon-trains full of dry-mouthed gamblers who used to dream of making it out alive.

Nothing about Vegas today suggests its barren history. In fact, the 11-acre Mandalay Beach has 6-foot man-made waves pulsing across the 1.6 million-gallon pool onto the 1,700-tons of imported California sand. They don’t have the actual ocean, but you can bet someone is feverishly working on it.

And, really, who needs the ocean? Herds of whales migrate to Las Vegas knowing full well they’ll eventually get slaughtered by harpoon-wielding casinos who grow fat from the intentional beachings that are forever baffling those tepid souls who’ve never thrilled to play the game.