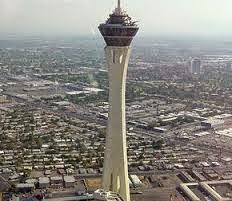 For me, being invited to participate in Extreme Vegas was like winning a really cool “Price is Right” Showcase and getting to meet a B-list celebrity who’s even more cuddly than Drew Carey.

So let’s start with SkyJump at the Stratosphere because it was the most exhilarating  activity and the only one that involved at least a little nudity.

I’m talking the nudity of luscious Claire Sinclair, the 2012 Playboy Playmate of the Year.

The SkyJump takes place from an exposed deck 855-feet above the concrete patios at the Stratosphere, the second tallest freestanding observation tower in North America.

I’d twice been skydiving 25 years earlier. Both were solo jumps, a distinction that gives me bragging rights over those who skydive strapped tandem snug to dudes who answer to daredevil nicknames like “Psycho” and “Mad Dog.”

I stress to our elementary school daughters that trying too hard to appear cool is the opposite of true cool.

I say this even as I devote my entire existence to doing everything I can to keeping my cool alive. It’s my juvenile compensation for not having things like a job, stability, income, realistic prospects, etc.

So, one week after turning 50, there I was on the Stratosphere’s 108th floor observation deck with three other reporters, our gracious host, and to add a dash of Vegas surreal, the voluptuous Claire Sinclaire.

Sinclaire has the pleasant kind of demeanor you’d expect from a person who is so far in life enjoying fame and fortune simply by smiling and removing her clothes.

Two other details I noticed about her: she has what seems to be an instinctual habit of provocatively turning her left knee in anytime anyone points a camera at her. At least that’s what happens when she’s upright. I can’t say if this reflex kicks in when she’s being photographed either lying on her back or posing on all fours.

Further research is required and I’m game for the duty.

She kept asking who’d be jumping with her, if any of us were experienced jumpers and what excited us most about the anticipation of a really good, long jump.

It got even worse when she told us that the resort’s Roxy restaurant had honored her by offering a Claire Sinclair Burger.

“Will you eat my burger?” she asked.

It’s a question no woman’s ever asked me before. I was confused enough to seek a little Sinclaire-ity: “Does ‘eat your burger’ mean the same thing in Las Vegas as it does in Pittsburgh?”

She pretended she didn’t hear me. One of the other guys told me it was the stupidest thing he’d ever heard.

I disagreed and think it was the kind of question any refined gent would ask.

Either way, I told my wife I think her question meant she was hitting on me.

It’s a common misconception that this is a bungee jump. In fact, it’s considered a controlled decelerator descent. You’re tethered to three wires that govern how fast you fall. A jump costs $109.

After a brief safety session, they zoomed us jumpers to the top and led us to a little pen where maybe a dozen people took pictures and turns telling us we were crazy.

As pep talks go, it wasn’t exactly let’s go out there and win one for the Gipper.

I’ve never been so scared in my life.

When it was my turn, they opened the booth security doors and led me in. I felt like I was sleepwalking.

The wind was roaring. In fact, the last guy in our group was the last guy to go. The howling winds had made jumping too dangerous.

For an extra $30, they strap a video camera to your wrist. You can watch the video here if you want to see how I look when I’m terrified out of my mind, a condition I describe with a careless profanity I in hindsight regret.

I’m not going to say jumping off that exposed metal plank was the greatest thing I’d ever done, but surrendering to my fears and walking away from it would have been the worst.

Cowardice in any form is deplorable.

Sure, I’m not without my flaws, but I proved I’m no chicken and yesterday I fielded calls from envious guys who thought what I did was the coolest thing in the world.


SkyJump at Stratosphere
Posted by Chris Rodell at 12:26 PM