Vintage baseball: Taking them out to the old, old ballgame 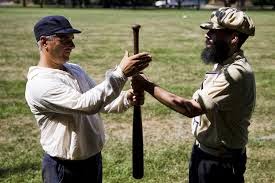 On Tuesday, Major League baseball’s All Stars will jet into Phoenix to play the old ballgame.

But starting Friday, six teams from around the midwest will be barnstorming French Lick, Indiana, to play the old, old, old ball game.

It’s vintage base ball -- a two-word construction purists will recognize as the proper way to address the then-nascent national pastime from circa 1864.

No mound. No designated hitter. No lights. No radar guns. No flashy three-story scoreboard. No Myley Cyrus blaring from the loudspeakers.

The vintage ball players are like Civil War re-enactors but without the lethal weaponry -- or the ball gloves.

“Yeah, no one wore gloves until about 1867,” says 38-year-old Matt  Moushey of the St. Louis Unions. “The ball’s a little softer, but I’ve still seen it break fingers.”

The man whose vintage name is “Mayhem” is by day an elementary grade school counselor in St. Louis. He’s the kind of baseball nut other baseball nuts compare themselves to when they want to prove they’re normal.

“I’ve just always loved the game,” he says. “I’ve always played it, read baseball histories, studied the game and have season tickets to the Cardinal games.”

But nothing signifies his cheerful devotion like the time he puts into vintage base ball. The team plays 50 games a year April through October with teams from the surrounding states.

So what will casual fans see if they attend one of the games on the lush field outside the resort’s landmark West Baden hotel?

“To me, the biggest difference is all the sportsmanship,” says Moushey. “There are no balls or strikes and the batters tell the pitchers where they want the ball to make it easier to hit. They get pitches until they get one they like. It was just so much more laid back and gentlemanly. That’s just the way it was.”

The vintage players at French Lick play, not for multi-million dollar free agent contracts, but for trophies and fun.

Make no mistake: They aren’t acting. They are serious about winning, but not so serious they don’t engage the fans in authentic lingo from the era.

“Runs are aces, pitchers are hurlers and the catcher is called the behind,” he says. “And back then the fans were called cranks. And I’m always happy to talk to the cranks.”

How times change. Back 147 years ago the cranks would come out to cheer the players. It could be argued today the cranks are the ones getting all the cheers.