Where to stay on Oscar night to see the stars 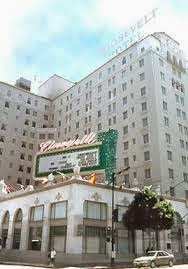 They are stars and you’ll be in their orbits. It’s something many fans from around the world enjoy.

“As soon as the dates for the Academy Awards are announced, we start getting calls from long-time guests who love nothing more than to be here on Oscar night,” says Bob Gregson, sales and marketing director for the Hollywood Roosevelt. The 300-room, the 84-year-old landmark hotel whose front windows look across Hollywood Boulevard at Grauman’s Chinese Theater.

The hotel, in fact, was Oscar before Oscar was cool. The very first Academy Awards was held at the hotel’s Blossom Ballroom on May 19, 1929. Al Jolson gave away 13 statuettes.

“There were 200 people there and the whole ceremony was over in 15 minutes,” Gregson says. “I don’t think anyone then ever imagined how big it was destined to become.”

Those same ballrooms on Oscar night this year will serve purposes more utilitarian than celebratory: The Roosevelt is headquarters for E television and the network uses the ballroom to stage its comprehensive coverage.

When Clark Gable and Carol Lombard stayed at the penthouse suite, it cost $5 a night. Today, it’s $5,000. General rooms there this weekend start at $366.

A newer cluster of stars are shining in the two-year-old Redbury Hotel at the iconic address of Hollywood and Vine. Recent guests at chef Daniel Elmaleh’s Cleo restaurant include Jeremy Pivan, Elizabeth Banks and Joe Jonas.

“Any night of the week at the Redbury you’re likely to see the stars,” says hotel general manager David Lang. “But on Oscar night you might find yourself walking  down the hall where A-list stars are hosting their private Oscar parties.

“We’re getting guests from around the world who are eager to immerse themselves in the buzz that comes from staying at a luxury hotel right in the center of all Hollywood has to offer. They’re booking rooms as much as a year in advance.”

Those rooms start this weekend in the mid-$300s.

• The W Hollywood Station Hollywood boasts it allows guests to see stars under the stars. Another Hollywood and Vine address, this one includes a massive projection screen that drops down in front of the hotel and screens the pop culture favorites like for guests who enjoy an outdoor oasis setting just off Hollywood Boulevard. Weekend rooms there start at $459 with a minimum 2-night stay.

• Looking to make a splash during your Oscar week stay? Check out the Renaissance Hollywood Hotel & Spa. It’s proximity to the theater stage makes it the headquarters for the world media due to descend on Hollywood for the Oscars. Renaissance rooms start at $419.

“The logistics of the Oscars tend to surprise guests as much as the glamor,” says Gregson. “There’s security, staff and media and they’re all crowded around this one little neighborhood.”