Never too early to plan for next Oktoberfest 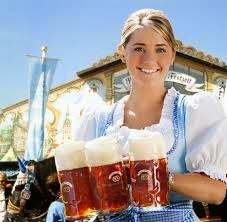 It may not yet be too late to book reservations for the original Oktoberfest, but you’d be foolish to delay any longer. After all, 2010 is only three years off. Yes, some enterprising souls are already inquiring about booking rooms for the 200th anniversary of what has become one of the largest parties on the planet.

“We recommend our guests book at least one year in advance,” says Dirk Auer, marketing director for the Platzl Hotel Munchen.

More than six million revelers are expected to consume more than 1.5 million gallons of special Oktoberfest brew over the 16-day festival, September 16-October 3. They’ll sing, dance, shout and belch themselves into a sudsy sort of contentment that will make many typical fraternity brothers seem scholarly by comparison.

The origins of the world’s largest kegger date back to October 12, 1810, when Crown Prince Ludwig (later King Ludwig I) arranged a great horse race to celebrate his marriage to Princess Therese of Sachsen-Hildburghausen. Like many individuals devoted to alcholic consumption, the event has endured an uneven history. Since its beginnings, Oktoberfest has been canceled 24 times due to war, disease, and other national emergencies. But since 1946, Oktoberfest has continued to assert itself as one of the most carefree festivals in the world.

In fact, one of the ironies of a festival devoted to mass inebriation is the sobermindedness required to securing convenient lodging, transportation (no cars allowed) and admission to one of 14 “tents” where popular local brewers compete to see who can throw the best party. Hosted by traditional brewers each tent is idiosyncratic enough to appeal to fans who fervently declare their favorite is the best.

• At 3,200 capacity, The Hippodrom (featuring Spaten-Franziskaner-Brau beer) is a mid-size tent and is considered the one where you’re most likely to see Paris Hilton and other lens-hogging celebrities.

• The 1,000-seat Kafers Wiesen Schanke tent (Paulaner) has made a name for itself as selling the best food. The Kafers-roasted duck is considered a continental delicacy.

• Hofbrau Festzelt (Hofbrau Munchen) is popular with Americans and Australians who enjoy the competitive prices and warm service from cheerful proprietors Margot and Gunter Steinberg.

• Schottenhamel (Spaten-Franziskaner-Brau) is where it all begins the elaborately crafted Black Forest cuckoo clocks strike noon, a signal to Munich Mayor Christian Ude to fulfill his traditional role of tapping the first keg and crying out, “O’zapft is!” In English, “The barrel has been tapped!” And euphoria, not to mention hangovers, is sure to follow. Only after this announcement inside the massive 10,000-seat party haul can other tents begin serving beer.

In each of the tents, voluptuous waitresses in traditional peasant blouses will begin drawing stares for more than their gravity-defying cleavage: many will carry 22 liters of beer in robust decorative steins that hold the American equivalent of 66 12-ounce glasses.

But just because you can’t get into any of the choicest hotels or the most happening beer tents doesn’t mean you can’t have a great time at the 2006 Oktoberfest. It just means you might have to stay outside of Munich. Like, say, maybe in Torrance, California, or Columbus, Ohio.

Yes, Oktoberfest has become one of Germany’s most beloved exports. American Oktoberfests are drawing hundreds of thousands of revelers to German neighborhoods across the country, something that would no doubt please Franz Daniel Pastorius, a founding father of Germantown, Pennsylvania, in 1683, and a driving force behind helping thousands of Germans settle in the New World. His great-great-great-great-great-great-great-grandson, Thomas Pastorious, has become his historic sort of doppleganger. The descendant urges Americans to experience Germany in the Pittsburgh brewery where for 20 years he’s been making authentic German beers like Penn Pilsner in the Bavarian tradition.

“The popular beers in America are made for people who don’t like beer,” Pastorious says. “I was convinced if we made beer in Pittsburgh that tasted like the beers in Germany, we’d be successful.”

His hunch was correct and anticipated the national trend that in 2004 saw craft beers like Penn Pilsner grow seven percent in 2004 and nine percent in 2005. Brewing goliath Anheuser Busch has responded by introducing their own specialty craft beers like Bare Knuckle Stout and Anheuser World Lager in 2003 with the hopes of quenching the thirsts of discerning guzzlers.

These craft beers are likely the ones you’ll be hoisting at many of the popular Oktoberfests across America in places like Lake Worth, Florida, October 21-23, where the Bavarian barbecue pork sandwiches are said to rival anything prepared in Munich.

Oktoberfest at Alpine Village in Torrance, California, attracts more than 100,000 people for the seven week festival, September 10-October 30. Imbibe enough and even first-timers might have a chance at winning the popular yodeling competition.

The dusty plains of Oklahoma hardly evoke alpine inspirations, but the Tulsa Oktoberfest, October 20-23, has been declared one of the top10 places in the world to celebrate the festival. It’s so popular that every year, a number of Bavarian bands pack up their accordions, tubas and clarinets and depart Munich bound for the plains of Tulsa.

But there’s raucousness to rival Germany in an all-American city named after an Italian explorer. Columbus, Ohio, has German Village, a 233-acre living history of buildings restored by the German Village Society in what has become the largest privately funded historical district listed in the National Register of Historic Places. More than 1,600 buildings constructed in the German tradition house artists, bands, food and enough authentic German beer to swamp the decks of the Nina, the Pinta and Santa Maria.

Of course, with so much communal merriment, there will be those who succumb to the temptation to overindulge. The Germans have a name for these bleary-eyed souls found immobile on the pavement. They are the “Bierleichen” (German for “beer corpses”). And that points out one other essential everyone should bring with them to ensure a safe, happy Oktoberfest: an earthbound teetotaler whom you can trust.

Even if you’re one of the fortunate souls who is certain he or she is being watched over by a trusted guardian angel from the heavens above, you can never be sure if they’ll be sober for Oktoberfest.
Posted by Chris Rodell at 12:30 PM