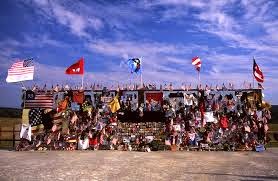 It is among the world’s most unlikely tourist attractions. There are no rides, no entertainment, no scenic wonders, no grand columns of marbled antiquities.

But sometime this summer, the 1 millionth person in fewer than eight years will drive at least two hours from the nearest major city, up a tire-jarring rustic road, past a ramshackle tin can recycling center to a hardpan dirt parking lot. He or she will walk to a desolate stretch of gaudily decorated chain-link fence and if they’re anything like the multitudes who’ve preceded them, once there they will begin to weep.

“This place means so much to people everywhere,” says Flight 93 memorial park security guard Michael Lashley. “In just the past week, I’ve met people from New Zealand, Japan, Russia, Finland and all over America. It’s usually way out of their way, but they say they just felt like they had to stop.”

This tear-splashed and now sacred ground is a global beacon to those eager to embrace a story of heroism that to them is so stellar it seems to shimmer.

“We’re honeymooning in America and we wanted to pay our respects to the people who gave so much,” said newlywed Maria Lomenz of Sicily, Italy, who was with her husband Sal.

“We were in New York and we knew we had to make the drive to Shanksville,” says Julie Turner, who was traveling with her 20-something friends Nick Eustace and John Avison from Oxford, England. “What happened here will never be forgotten. Hero’s an overused term, but certainly not in this case.”

Eustace, a UPS delivery man, remembers making an afternoon delivery in London when a panicked package recipient pulled him into her living room to watch the overseas news. “I remember staying the next couple hours crying with this complete stranger.”

Avison contrasted the Shanksville memorial with its hodgepodge of tributes ranging from the sublime (beautifully composed poems painstakingly inscribed on stones) to the curious (Nerf balls, kazoos, Matchbox cars) to his homeland’s famous aloofness. “Americans are a very proud people and I admire that,” he says. “This is something each American feels in their hearts and they come and express it so beautifully.”

Flight 93 museum curator Barbara Black is responsible for cataloguing all the tributes. She says what may seem silly to some have greater meaning to the giver. For instance, no one could figure out the meaning behind the simple brick left behind by an anonymous soldier.

“It wasn’t until we found an unsigned note that had nearly blown away that we learned the meaning,” she says. “This soldier had joined because of  9/11. He was in special forces and had been sent to Afghanistan. The brick was from an al-Quaeda headquarters they’d bombed and taken over. It was just a brick, but it meant so much more.”

Stories like that are why security guard Lashley always includes big, dark sunglasses as part of his official uniform. The sunglasses are meant to conceal his emotions. He says it wouldn’t do for visitors to see security crying, something he frequently does, and he wants to maintain a professional reserve.

At Shanksville, even the stoic faces of authority run with tears.