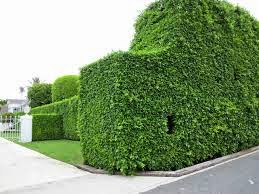 As I stood before the lush magnificence of the 50-foot structure towering over me like a verdant castle wall, one belittling thought kept ringing through my brain:

“This hedge is worth more than my house!”

I had to know. I approached a man holding clippers and said, “Excuse me, sir. Is this hedge more valuable than a modest two-story home in bucolic Pennsylvania?”

Sadly, his ignorance in English was equal to mine in his native Spanish. It’s a pity were were unable to communicate. I wanted to compliment him on his handiwork and inquire on how much maintenance was required to sculpt and contain this vegetative equivalent of the old Iron Curtain.

To me he was a modern Michelangelo toiling on an ever-changing canvas, an Ahab deigned by fate to fight a growing green monster. Certainly, a man of considerable measure.

It was only later that I learned my pessimistic assumption of the hedges being worth more than my house was wrong, wrong, wrong.

They’re worth more than my dream house.

Veteran Palm Beach landscaper Jim Hansen was even more emphatic. “These people would rather lose the home than the hedge,” he said. “I know one lady whose 30-foot hedge is in jeopardy because a retaining wall is deteriorating and I guarantee she’d rather her house burn down than that hedge die. The house could be replaced a lot quicker than the hedge could.”

They tell me fine homes inhabited by Mellons, Rockefellers and Trumps are behind these hedges. Touring Palm Beach, I saw no evidence of such structures.
a
All I saw were hedges. Thick skyscrapers of foreboding elegance. It wouldn’t surprise me if the captains of industry behind the hedges lived in simple huts and devoted all their money to hedge tending. It would be cheaper than maintaining a posh home and you could still impress nosy neighbors.

After all, this is a town where flawless, multi-million dollar mansions are routinely razed to make way for newer gaudier versions. The same fate has befallen many a once-happy marriage. In Palm Beach., the only things that aren’t disposable are the hedges.

Constructed of either ficus benjaminia or its more expensive cousin, ficus nitida, a singled potted nitida can cost up to $120 while the benjamina costs half that. Spaced two- to three-feet apart over the length of a 500-foot border, the cost to purchase and plant 250 nitidas is about $30,000, Hansen said.

Subsequent year-round maintenance runs up to $1,500 every two months with some monster mansions employing teams of grounds crews who spring into action whenever a rebellious leaf thinks about going AWOL. In some places, the hedges are a thick tangle of roots, stumps and sticks 10 impenetrable feet wide at the base.

Palm Beach code compliance officers enforce safety regulations about sidewalk encroachment, but as far as hedge height is concerned, the sky’s the limit.

Privacy is at such a premium that when some real estate agents want to “show” homes, they arrange to meet them at the local airport. The only way to see homes is from a helicopter, which can add as much as $600 an hour to a casual browse.

“That’s the only way to show property in Palm Beach,” said McInerney, who recently sold a $7 million property to Rush Limbaugh. “You simply can’t get any idea of the home from anywhere but the air. In most cases, you can’t even see the finest homes from the road.”

Back on earth, one can’t help but wonder if Palm Beachers have lost their sense of whimsy. Have no neighbors ever tried to play steroid badminton with soup-up birdies and the enormous hedges serving as a net. Has no one ever donned 55-foot stilts to spy down upon nude sunbathers next door and ask the neighborly nerve-wracking question, “Say, Fred, could I borrow your chainsaw?”

Other ritzy zip codes in America have natural barriers to prying eyes. Rolling terrain, wooded acreage and hilltop seclusion keep the public at bay. In Palm Beach, they have the hedge.

Where to see the Hedge Hogs ...

Palm Beach’s narrow streets and an aversion to publicity have led local leaders to frown on organized tours so the best way to see the 11 1/2 mile island is to rent a bike and pedal the scenic 3-mile path that runs along Lake Worth between Worth Avenue and the northern tip of Palm Beach.

Palm Beach historian Jim Ponce said: “It's a beautiful ride and you get a nice cross section of landscaping and architecture. Near the beginning the hedges tower above you, but as you get farther from the business district some of the lawns come right down to the path.”

Ponce also recommends cruising past the Bethesda Episcopalian church to Seabreeze Avenue, where the ficus fortresses stretch nearly the length of the street, broken only by the sculpted archways carved over driveways. South County Road below Worth Ave. is also noted for its towering hedges.