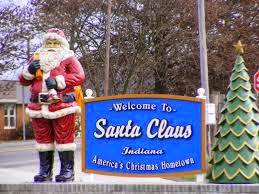 Do you believe in Santa Claus? Answer no to that in one small midwestern town and you’ll be more than a holiday heretic. You’ll be an obstacle to civic advancement.

Welcome to, Santa Claus, Indiana, pop. 2,041, the only town in all America named after the Jolly Ol’ Elf and dedicated to celebrating the evergreen virtues of Christmas.

“It’s year-round, but we really ramp it all up come Christmas,” says Melinda Wilkinson of the Spencer County Visitors Bureau. “There are parades, tree lightings, chestnut roastings and fierce competitions between homes vying to be best decorated.”

This is a town so crazy for Christmas every street is named after something involving the holiday. There’s Candy Cane Lane, Mistletoe Drive, Arctic Circle and Balthazar, Melchior, and Kasper drives -- the Biblical names of the Three Wise Men.

The thre firetrucks at the Santa Claus Volunteer Fire Department are named Rudolph, Dasher, Blitzen and a new EMT vehicle was dubbed Comet.

That’s not all. In Santa Claus, local Catholics worship at a church named St. Nicholas, guests overnight at Santa’s Lodge, and golfers from all over the world order Christmas Lake Golf Course logo golf balls to convert into dimpled, snow-white ornaments.

It’s almost like the town is striving to become some sort of holiday theme park, which is exactly what it would be if there wasn’t already an existing theme park devoted to that very purpose.

That would be Holiday World & Splashin’ Safari, located in -- you guessed it -- Santa Claus, Indiana (about an hour west of Louisville).

“Since 1852, we’ve been the only town in America with a postal designation of Santa Claus,” says Wilkinson. The town is also the birthplace of Chicago Bears quarterback Jay Cutler and was the boyhood home of Abraham Lincoln.

Sure, both men have their historic cheering sections, but neither has the fan base of the big boy with the long white beard.

Local legend has it the town sought to be named Santa Fe, but the name was taken. So residents met to choose a more unique name, coincidentally, after church on Christmas Eve.

“The story goes that the winds blew open the doors and the sound of nearby sleigh bells drifted in,” Wilkinson says. “The kids all yelled, ‘It must be Santa Claus!’”

The fabled decision from long ago, one with all the mystic elements of a Hallmark Christmas movie, would end up having a dramatic impact on the holidays of current Santa Claus post mistress Marian Balbach.

“The rest of the year is pretty calm,” she says. “Come Christmas, it’s a whole new ballgame. It seems everyone in the world wants to have their Christmas cards stamped with Santa Claus, Indiana, 47579.”

The post office goes from about 10,000 letters a month and one full time employee the rest of the year to five full timers who handle about 400,000 letters in just three weeks.

Is she stressed? Does she hate Christmas? Does she throw darts at Santa’s likeness?

“Oh, I just love it,” she says. “You can’t help but share the happiness of people who’ve driven six or seven hours just to mail Christmas cards from Santa Claus. We had one gentleman who used to gather cards and drive them here just so they could be sent from Santa Claus. He was 90 and I finally convinced him just to send them and we’d be happy to take care of it.”

Many of the letters are gallery worthy works of art, she says, with creative sorts going to extraordinary lengths to stylize elegant envelopes. Others are works of art by tiny artists whose preferred medium is stubby crayon.

Yes, postal patrons, there is a Santa Claus and not only does he receive your letters, he goes to great lengths to individually answer each and every one.

A team of Santa Claus volunteers, dubbed, of course, Santa’s Elves, answers and returns the letters, many of them dusted with cookie crumbs from a bumpy journey, according to chief elf Pat Koch.

“Kids all around the world think if they drop a letter to Santa Claus in the mailbox, he's going to get it,” she says. “It's our job to see that Santa answers his mail. Really, that's what Santa Claus is all about.”
In a town where Christmas virtues like kindness and giving are considered civic duties, the name Koch stands out.
Pat Koch is the daughter-in-law of Holiday World founder Louis Koch, whose Santa Claus Land in 1946 became the world’s first themed amusement park, pre-dating Disneyland by nine years
In the mid-1990s, the theme park, led by Koch’s son, Will, began investing heavily in roller coasters and a water park that would rival the world’s best.
By 2005, Holiday World edged out all the Disneys, the Six Flags and a host of better known others when the International Association of Amusement Parks and Attractions organization awarded it Best Park, the smallest park to ever earn the distinction.

Sadly, this visionary father of three died of complications of diabetes in June at the age of 47. On November 16, Koch was posthumously inducted into the IAAPA’s Hall of Fame alongside industry legends Walt Disney and Milton Hershey. His induction ceremony noted his eagerness to give rather than gouge.

Besides free parking, the park (open May through October) offers free sunscreen and everywhere are unattended soda oases that allow guests to drink as much Pepsi product as they want all day for free all summer. In an age when others in the entertainment industry routinely charge $4.50 or more for 12-ounces of flat soda, the gesture is flabbergasting.

“He really wanted to give as much back to the guests as he could,” says park spokeswoman Paula Werne. “That’s just the kind of guy he was.”

What do you expect from a man who devoted his life to helping really put Santa Claus on the map?