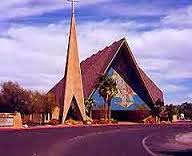 Las Vegas has a dirty little secret it’s hiding from many of the 35 million tourists who come to cut loose in a place where sin is celebrated and sold with messianic zeal.

Las Vegas has churches. Lots of them. Mosques, temples and synagogues, too, representing vibrant faiths from all over creation.

And each and every Sunday these prayerful halls are filled with devout worshippers whose idea of big stakes differ vastly from those who pray about things like drawing a really swell hand of cards.

“I think America would be surprised by the huge religious undercurrent that runs through Las Vegas,” says Dr. Mark Wickstrom, senior pastor at the 3,700-member Community Lutheran Church of Las Vegas (www.communitylv.org).

“A Baptist church in Henderson recently surveyed how many churches of all denominations were within a 2-mile radius of its location. In that two-mile circle, it found 102 churches. God is everywhere. Even here in Las Vegas.”

Indeed, there are many sacred places in Sin City, a town where high rollers mingle with holy rollers and others whose idea of heaven has nothing to do with raking in a big stack of colorful chips across plush green felt.

Some surveys over the years have even included Las Vegas among lists of cities with most churches per capita.

You don’t find that nugget touted on any of the splashy websites hawking near-naked show girls, excess, games of chance and the gaudy secular temples where you can find it all. Prominent and otherwise comprehensive guide books such as Fodor’s and Lonely Planet detail laws regulating Nevada prostitution and where to find the best strip clubs, but fail to include helpful mention of where someone needing spiritual assistance ought to go.

“Many people make it a point to find a church to attend before they visit and make sure they’re here in time for worship,” says Mike Matijevich, senior pastor at the Paradise Christian Church (www.paradisechurchlv.com). “Their faith is an important part of their lives and that’s a part they are unwilling to overlook no matter where they go to vacation.”

Matijevich is a successful extension of a religious phenomenon that is rare if not unique to Vegas: Retail religion.

The recent downturn devastated the city and left it with 15 percent employment and many shuttered businesses.

“You can’t drive past a Vegas strip mall without seeing some church where maybe a dry cleaner used to be,” says Wickstrom, 62. “People come here to start churches because they believe there must be a lot of souls here that need saving. Some may be untrained, unconventional and unaffiliated, but my sense is their intentions are very honorable.”

It’s the same motivation that lured Matijevich, 63, a native of Jacksonville, Illinois, to Las Vegas 32 years ago. He’d been an associate pastor at the First Bible Baptist Church, an independent Baptist church, in Rochester, N.Y., from 1973 to 1978 when he decided to move to Las Vegas.

“I wanted to find a city that was really popping with life and would be filled with people that might need my help,” he says.

The man who preaches about paradise settled there. Paradise is an the unincorporated area of Vegas that includes McCarran International Airport and large sections of the The Strip just three miles from his pulpit.

Matijevich started advertising and knocking on doors and one soul at a time began building a church he soon filled. He’s since filled two other churches and now counts 500 regulars in his non-denominational evangelical Christian church congregation.

“We’re progressive and growing,” Matijevich says. “In Las Vegas, we have an endless number of prospects. We try and reach them all.”

“Lots of the people who entertain tourists at night on The Strip will be the same ones entertaining them on Sunday mornings in church,” Wickstrom says. “The music is fantastic.”

What you won’t find at many churches like Wickstrom’s are fire and brimstone denunciations about what will happen if you succumb to a primary temptation of Las Vegas.

“I know there are people in our congregation who enjoy gambling and will tithe when they win,” says Wickstrom who, like Matijevich, does not wager.

Finding chips in the collection plate happens, he says, but he cannot confirm a Vegas legend that an earnest area monk makes the rounds every Monday to collect the chips and cash them in at the casinos to use for various needy ministries.

“That’s an unsubstantiated rumor,” he says. “There is no chip monk.”

He delivers the “chip monk” punchline with practiced timing of a Strip comic.

A sense of humor is helpful ministering in a town that can seem to be an apocalyptic cocktail of excess, gluttony, gambling and heinous addictions that cripple both individuals and families.

Toss in a history of nearby nuclear testing and mushroom clouds over the horizon and believers are to be forgiven if they’re convinced the end is near and, indeed, the end is bound to begin in Las Vegas.

It’s why both pastors encourage tourists to set aside a little time to visit one of the many Las Vegas places of worship and return home with something so much more soulful than hard luck stories of near misses at the blackjack table.

Wickstrom says no one need know and flips the meaning of the popular Vegas slogan to signify, not sin, but salvation.

“If you visit Las Vegas and attend church, I promise I won’t tell,” he says. “No one needs to know. Trust me. What happens in Vegas, stays in Vegas.”