Pop culture statues from around America 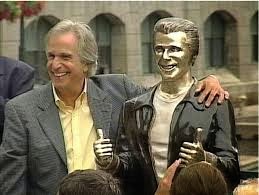 Snooty art critics deride the project as tasteless. They say it reflects poorly on the city’s more refined cultures. Gadzooks, they say, it is gauche.

Grassroots efforts to erect a RoboCop statue in Detroit?

Sure, but like-minded critics said the same things about now-iconic statues, both the cool and the kitschy, with enduring roots in pop culture. And promoters from around the country say the right statue can be a lucrative boon to local tourism.

Devotees of performers and offbeat celebrities will make pop pilgrimages from around the globe to congregate with like-minded fans, have their pictures snapped with statues and revel in a fictional ideal that somehow began to resemble reality.

And what might the subjects of these graven images say about the phenomenon?

All gigantic head and 10-foot stretch pedestal, it resembles the world’s largest PEZ dispenser. And that isn’t even the oddest thing about the Zappa statue outside the Highlandtown branch of Baltimore’s Enoch Pratt Free Library. No, that would be that it is an exact replica of an original in Vilnius, Lithuania, where Zappa is revered for being a freedom fighter against all mental tyranny. Baltimore arts director Randi Vega remembers the call saying Vilnius wanted to donate a Zappa statue to his hometown. “I tried to find some connection,” she says. “There is none. He’s Italian, not Lithuanian. And he never set foot in Lithuania.” The library location is symbolic for a man who always believed books, not bullets, were the world’s greatest liberators. A relevant Zappa quote was read during the 2009 unveiling: “If you want to get laid, go to college. If you want an education, go to a library.”

Note to RoboCop supporters: It might help your cause if your pop culture icon came with a sweet and catchy theme song. Something like, “Love is all around, no need to waste it! You can have the town, why don’t you take it! You’re gonna make it after all!” The hats fly like Jiffy Pop around the Mary Richards statue, one of five commissioned by TV Land Network to commemorate heirloom characters held dear by Baby Boomers and successive generations of couch potatoes. “It’s such a great little tourist attraction for us,” says Kristen Montag of Meet Minneapolis CVB. “She remains such a great role model and everyone loves Mary.” Of course they do. After all, she’s the answer to the question: “Who can turn the world on with her smile?”

It’s pure cosmic coincidence that two universal promoters of peace and non-violence just happened to make their way to a city so historically compatible with things like flowers and free love. The Gandhi statue, a 1988 gift from the Gandhi Memorial International Foundation, is at the Embarcadero’s Ferry Building Plaza, site of a weekly farmer’s market, thus fitting for a renown vegetarian. His spiritual counterpart is more remote. Yoda is based at the Presidio, home of the Lucas Arts Entertainment. Oddly, the Gandhi statue at 8-feet is the less realistic of the two beings. Yoda is relatively life-sized as Yodas go. That two beings so revered for values so in tune with San Francisco is not lost on city promoters: “What does it all mean?” asks city arts commissioner Kate Patterson. “Whatever your idea of wisdom and inspiration, you’ll find it in San Francisco!”

Discussions in this history-heavy town often center around real or imagined Satanic influences, gruesome executions and, for the past seven years, which of the two Darrens was more appealing. That’s because in 2003, wiccan-welcoming Salem was bestowed with a sunshine splash of delight so unexpected it might very well have seemed like a result of pagan witchcraft. “We’ve always tried to share the lessons of tolerance that can be learned by studying the Salem witch trials,” says Kate Fox, executive director of Destination Salem. “The Samantha statue really helps show what that’s all about. She may be a fictitious character, but she’s a witch and she’s just so much fun.” The statue provides a joyful contrast to Puritanical grimness in a town open-minded enough to ask questions like, “Are you a good witch or a bad witch?” And what city eager to tidy up its image wouldn’t welcome a statue that comes with its very own broom?

Don’t take it personally if you hear the town’s most famous resident telling you to hit the road, Jack. No one wants you to leave. In fact, they’ve made it inviting for you to stay and, as Ray Charles sang in 1953, “Mess Around.” That’s what might have been on the mind of one young couple who came all the way from Switzerland to camp on the riverfront park dedicated to the man Frank Sinatra called “the only true genius in show business.” “They said they came to America to do two things: visit Disney World and spend the night with the Ray Charles statue in Albany,” says Rashelle Beasley, manager of the local welcome center, where a scale model statue allows the vision impaired to “see” the statue the same way as Charles, a man who lost his sight to glaucoma at age 7 and still grew up to become a true visionary.

Don’t blame Barney for the bumbling that led to multiple Andy Griffith statues. TV Land officials in 2003 decided to put a charming statue of Andy and Opie in Raleigh about 150 miles west of Andy Griffith’s old stomping ground. “Andy was born and raised in Mt. Airy, mentioned local places on the show and it’s where we’ve for 22 years been hosting Mayberry Days,” says Mt. Airy arts promoter Tanya Jones. “The statue belonged here.” No less an authority than Andy Griffith himself said so, too. And so during Mayberry Days in September 2004, TV Land doubled down and invited Griffith to a real hometown unveiling. The Andy Griffith Museum opened in 2009 and in its first year drew 55,000 visitors from every state and 40 countries who came to celebrate the homespun joys of America’s favorite sheriff. And people in Raleigh still enjoy the same homespun emotions, so it’s no big deal. Happily, there’s plenty of Andy to go around.

His is an image so wholesome, so gentle, you suspect he’s a fictitious character from some fantasy land. Or more likely heaven. But the man generations knew as Mr. Rogers wasn’t acting. And the only thing maybe more surprising than his actual existence is the recognition of the place that forged his sweet soul. Yes, Fred Rogers (1928-2003) was a Pittsburgh Steeler fan. The riverbank statue honoring him is just 100 yards from the south end zone at Heinz Field. Like many cities, Pittsburgh is fanatical about its sports heroes, but the statue with the most prestigious real estate portrays a sweater-wearing ordained Presbyterian minister who made his living in Pittsburgh talking to kids about things like friendship. Born an hour away in nearby Latrobe, his monumental memorial will forever more be in the heart of Pittsburgh. That shouldn’t surprise anyone. Rogers spent a lifetime making his way into millions of other hearts all around the world.

In a city of so many illustrious and outstanding big thinkers, the biggest thinker of them all is slouching so luxuriously kids can’t resist climbing up on his lap. They monkey about, make clown faces and stick their dirty little digits up his big bronze honker. It’s not an activity you’d see at, say, the Lincoln Memorial. But it goes with the territory when you’re the only world famous brainiac everyone considers kind of cuddly. Elliott Ferguson, CEO & President of Destination DC, says the 4-ton, 12-foot statue outside the National Academy of Sciences is a natural fit. “We may not all be able to explain his Theory of Relativity, but we can celebrate Einstein for his genius and compassion,” Ferguson says. “He was a giant in his field and the size of the sculpture is fitting.” Nifty historical coincidence: sculptor Robert Berks also designed the statue of Fred Rogers for Pittsburgh. Prior to his death in 2004, Rogers whenever he was in Washington would always stop at the Einstein statue to enjoy solitary contemplation.

“Happy Days” episode 89, broadcast Sept. 20, 1977, has come to epitomize when a  series begins a descent to irredeemable lameness. That’s when Arthur Fonzarelli literally “jumped the shark.” Cultural poobahs can debate whether the show was ever the same, but legions of fans and tourists still assert that -- “Ehhh!” -- Fonzie never lost his cool. Organizers had to overcome howls of protest from outraged art snobs who railed agains “that stupid Fonzie statue.” But fans prevailed and since 2008 a constant and smiling stream of tourists (including Ron Howard and  Winkler himself), have stopped by its scenic Riverwalk location to pose for thumb’s-up snapshots with what has become known as “The Bronze Fonz.” David Fantle, formerly of VISIT Milwaukee and now a Wisconsin deputy secretary of tourism, said the campaign he helped spearhead generated about $14 million in ad equivalent free PR for Milwaukee. And this anchored Arthur is physically incapable of ever jumping the shark or anything else.

By at least one sacrilegious standard, you could argue he’s the greatest fighter in history. Sure, Muhammad Ali beat Joe Frazier, but Rocky Balboa, Philadelphia’s underdog everyman, is on some score cards kicking the butt of historical heavyweight Benjamin Franklin. “To many people Rocky Balboa has become the identity of Philadelphia,” says Meryl Levitz, president of Greater Philadelphia Marketing and Tourism. “Philadelphia and Rocky are inseparable. Rocky’s always been about resilience, endurance and triumph. It’s about getting somewhere.” That somewhere would be to the top of the 72 steps at the magnificent Philadelphia Museum of Art where the strains of “Gonna Fly Now” still reverberate. Running the Rocky steps is one of the history-rich city’s biggest tourist attractions. Books have been written about what it means to people who scale the steps. Let their stories be inspirational to RoboCop, but be warned: To get anywhere near the iconic status achieved by Sylvester Stallone’s Rocky, it’s a pretty steep climb. And there’s a whole lot more involved than just 72 stone steps.