Go fly a kite? In Austin it's the thing to do 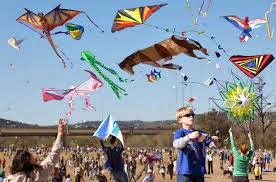 David Gomberg is traveling from Portland to Austin this weekend and he’s taking a kite.

What some busy executives won’t do to avoid flying commercial.

Kites have taken this buoyant 57-year-old entrepreneur all around the globe. He swears it’s the only way to fly.

“Yeah, it’s kind of like Eric Clapton,” Gomberg says. “He always takes a guitar. Me, I always take a kite. Kite flying is such a wonderfully diverse discipline. It’s been done for thousands of years in all cultures all over the world. Anyone of any age can enjoy kites and the wind is always blowing somewhere.”

Please don’t mistake this for an off-color putdown, but it’s going to really blow in Austin’s Zilker Park this weekend. At least that’s what as many as 20,000 kite enthusiasts are hoping.

That’s where Aemrica’s oldest and longest continuing kite festival, now in its 82nd year, is being held in the scenic 351-acre park.

“There will be as many as 1,000 kites in the sky at any one time,” says festival co-chair Bunnie Twidwell.

Like the earth-bound people tethered to the tissues, the kites will come in all shapes and sizes. Some micro-kites will fit neatly in your shirt pocket and others will be gargantuan enough to resemble preposterous Macy’s Thanksgiving Day Parade floats.

They will bestow Austin skies with a personality so euphoric and magnificent that tens of thousands of pictures will be snapped and not a one will match the memory.

Professional and amateur kite makers from as far away as Australia will compete in categories that include steadiest kite; largest/smallest kite; most unusual kite; and strongest pulling kite. All kites must be homemade. Some hobbyists will devote hundreds of tedious hours constructing kites to bring to Zilker.

Some of those kites may achieve elevation for fewer than 30 seconds before being devoured by a stately 50-foot pecan tree known to feast on carefree kites.

“We have trophies for 1st, 2nd and 3rd place finishers,” says Twidwell. “No prize money, but a whole lot of satisfaction.”

And likely another generation of youngsters will be hooked on a pastime that is at once childish and complex.

“I won a 2nd place red ribbon when I was 8 years old,” says Twidwell, an administrative assistant at The University of Texas. “That was 49 years ago and I still have that little ribbon.”

Kites may be flighty, but the people devoted to them are not. They are imbued with an appreciation that the same elements necessary for a jumbo jet to become airborne need to be present for the same thing to happen with kites constructed from sheets of paper, bamboo and dabs of kindergarden glue.

Drag, yaw, mass and dihedral are terms pilots are all schooled to understand, yet even blockheads like Charlie Brown instinctively sense when one of them is absent and kite doom is imminent.

It’s a discipline as apt to attract engineer-minded number crunchers as it is ambition-free idlers who revel in laying on their backs in the grass to gaze up at passing clouds.

“It’s such a great family activity,” Twidwell says. “You’ll see three and four generations of family kite builders out here this weekend. We have one gentleman who’s 83 years old and has been attending for 40 years and what kid doesn’t love kites?”

The hobby is 200 years older than Christianity. The first written account of kite flying depicts crafty Chinese General Han Hsin sailing a primitive kite over the walls of city he was intent on marauding. He retrieved the kite and used the stretch of string to determine how far he’d need to tunnel to reach past the fortifications.

If those war-like origins are disturbing, consider a more whimsical alternative, according to Gomberg.

“Another story says a Chinese farmer was tired of having to chase after his hat that kept blowing off in high winds so he tied a string to it. It blew off, he held onto the string and the first kite was born.”

Kites have always tickled the intellects of some of history’s most distinguished thinkers.

“Alexander Graham Bell spent his whole life tinkering with kites and in 1909 constructed these enormous monstrosities capable of lifting grown men 100-feet in the air, ” says Eddie Kennedy, superintendent at the Alexander Graham Bell National Historic Parks Site in Beaddeck, Nova Scotia (www.parkscanada.gc.ca/bell). “He was a genius, but a child at heart. He adored kites.”

Then there’s Ben Franklin who disregarded common sense to in 1752 secure an uncommon and electrifying place in kiting history.

An inner rage drove Gomberg from the courts to the clouds. He used to spend his days refereeing contentious DUI hearings and his weekends decompressing with kites. He eventually self-published a 1989 instructional book, “Stunt Kites,” that did well enough to warrant radical career change.

This weekend, the Gombergs will deploy a 30-by-90-foot octopus kite that’ll appear gargantuan enough to devour chunks of the Austin skyline.

Though deft construction and with the necessary assist of steady winds, the 40-pound raft of ripstop nylon will majestically rise into the skies where he will maneuver it with a single thread of woven high-strength spectra fiber.

And his face will yet again become plastered with what he describes as “one of those big goofy kite smiles.

“Everyone has those sweet, wistful childhood memories of putting a kite up into the sky,” he says. “It’s a feeling that never leaves you.”

Makes you wonder why “Go fly a kite” ever became considered such a nasty putdown. Listening to Gomberg, it sounds like what mental health experts ought to be prescribing.