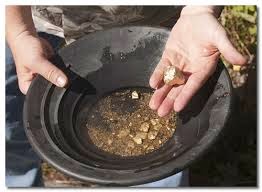 The onset of winter led Beth Gilbertson to ditch her job as a Salida, Colorado, office manager two years ago to spend her days digging in the dirt at the Crater of Diamonds State Park in Murfreesboro, Arkansas, home of the world’s only public diamond mine.

“A lot of people think it’s not possible or they just aren’t lucky,” says Gilbertson. “Well, luck has nothing to do with it. All it takes is hard work.”

That hard work pays off when you find a whopping 8.66-carat knuckle-sized diamond, as Gilbertson did found April 26, 2011. It’s the third largest diamond discovered on the site since it became a state park in 1972 and the largest in almost 30 years.

“It’s so historically significant, I won’t take less than $120,000 for it,” she says. “But right now I just get such a kick out of holding it. It’s been in the ground millions of years, is totally unique and it’s all mine!”

Her find is of historic value, but Park Supt. Justin Dorsey, says euphoric finds in the 37 1/2 acre state park in southwest Arkansas are nothing unusual.

“It’s absolutely possible to get rich quick here,” he says. “Park tourists have mined more than 29,000 diamonds here since 1972. We have more than 100,000 people from all over the world coming to visit and it’s not uncommon for a lucky few of them to walk away with diamonds worth anywhere between $3,000 and $25,000.”

Arkansas isn’t the only place tourists seeking natural wonders more tangible than a really pretty sunset. Here’s a few others:

• Coloma, California -- There’s still gold in them thar hills along the banks of the South Fork of the America River where James W. Marshall exalted, “I have found it!” leading to the great American gold rush of 1849. Margie Erhardt of Gold Rush Mercantile says weekends still see about 50 to 70 amateur prospectors panning around in the river. Most nuggets are worth between $30 and $200, but a fourth grader recently made headlines for finding an $800 chunk

• Franklin, North Carolina -- The self-proclaimed “Gem Capital of the World” features The Franklin Gem & Mineral Museum and nine mines where tourists can toil with buckets and shovels for rubies and other gems sometimes worth up to $100.

• Grand Junction, Colorado -- The biggest prize obtained here through the Museum of Western Colorado isn’t a pile of cash, but rather a big pile of bones. Really big bones. “It’s like fantasy baseball camp for dinosaur buffs,” says museum curator of history Dave Bailey. “And if they find a dinosaur, they’re name is forever attached to the discovery.”