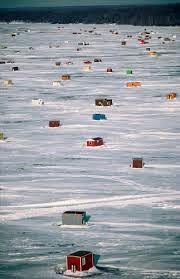 “Yeah, I remember I had one guy up from Texas who wanted to ice fish,” he recalls. “We were driving along and he said, ‘So when will we get to the lake?’ I said, ‘We’ve been driving on it for 20 minutes.’ He freaked. He thought we were just on some great big field.”

Welcome to Mille Lacs, the massive 132,000-acre (20 by 15 miles) central Minnesota lake that is to rugged ice fishing what the sunny Riviera is to posh pampering.

It has it all, well, at least compared to what the frozen primitives who huddle around desolate holes in other less advanced winter climes have.

Mille Lacs, about 80 miles north of the Twin Cities, has plowed roads with street signs, pizza delivery, regular trash pick-up and cheery residential communities of warm homesteaders -- all built on a seasonal and ever-shifting foundation of 36-inches of semi-solid ice.

From about Thanksgiving through the end of February, it’s a veritable Minnesota metropol-ICE.

Then there are the homes. Ah, yes, the homes. With the exception of elemental terra firma, they’re much like the ones most Americans sleep in every night.

“Ours have gas stoves, ovens, PlayStations and flat screens with Direct TV and the Sunday NFL ticket,” says Mike Christenson co-owner and fishing guide at Hunter Winfield’s Resort www.hunterwinfields.com in the town of Isle on the lake’s southern shores.

Right now and every frigid winter since the late1950s, more than 5,000 fish homes dot the lake, according to the state Department of Natural Resources. The thermostats inside are set to a comfortable 72-degrees. The walls are paneled like man cave game rooms and inside the happy occupants are dressed, not in parkas and mukluks, but shorts and T-shirts.

It’s exactly like what’s happening in family rooms all across America with one distinct difference: At Mille Lacs, at any moment, you can haul a trophy walleye straight through the floor.

Each fishing house has as many as a dozen pizza-sized holes polka-dotting the well-insulated floor.

The holes are augered into the thick ice. Above each opening and attached to the walls are fishing lines descending as much as 30 feet into the chilly waters below.

If the fish aren’t biting, you attach your fish house to your pick-up and roll a few miles further along the ice and just auger in all over again.

Lutgen, 50, has been ice fishing on Mille Lacs every winter since he was 8. Today, he often brings his grandson, Kaleb, 3.

“A really tasty walleye is about 17-inches long, or about as long as Kaleb’s leg,” he said. “But the measuring’s getting tough because Kaleb won’t stop growing. The other day he told me, “Grandpa, my leg’s getting too long.’”

Outside in temperatures that can descend to 60-degrees below zero, fire-hydrant sized eagles with their 8-foot wing spans will occasionally swoop down to feast on soupy piles of discarded entrails.

The Lutgens spend many otherwise inhospitable winter days resplendent in an $11,000 Ice Castle fish house. It’s perfectly comfortable, but even he admits to some pangs of fish house envy.

And everyone mentions stories of showboaters who’ve have installed saunas and hot tubs, otherworldly amenities which must surely startle any already dazed fish unfortunate enough to have been hooked.

It’s about what visionary World War II veteran Clark Lyback imagined when, just a few years removed from searing hostilities in the Battle of the Bulge, he and his wife Phyllis moved to Wahkon, also the lake’s southern shores, to build his fishing resort (www.lybacks.com).

“After the war, he was looking for someplace really peaceful,” says his son, Eddie. “He came to Mille Lacs.”

Prior to the 1940s, people who fished on ice did it roughly the same as cavemen. Exposed to the elements, they’d drop a line in a hole and hope.

But with a veteran’s can-do spirit, Lyback attached a plow to a Jeep and started “paving” roads on the ice. Soon, he hammered together some plywood to act as humble windbreaks.

“He died in 1984, but he lived to see how big this got,” he said. “Still, I think even he would be dumbfounded by some of the 12-by-32 footers with LED lighting, solar panels and stuff like that,” Lyback said.

Thrill seekers and lovers of odd experience from around the world are becoming regulars visitors to Mille Lacs. And Lyback says becoming increasingly common for reverse snow birds -- full-time Southern residents, many of them transplants -- to fly their children to Minnesota to enjoy the exotic winters they remember so vividly.

Many of the houses are owned by resorts and huddle together near the shoreline for party purposes. Others enjoy magnificent isolation that sometimes seems positively lunar.

“To watch the sun come up from way out there in middle of the lake where all you can see is ice and hints of shore is really spectacular,” he says.

Maybe, but you can forget about pizza delivery.

“We deliver out on the ice most every weekend,” says Nick Laberstron of the Isle Bowl & Pizza. “The Garbage Pizza with everything is our most popular. It’s $23.38 -- and that’s with tax. We mostly deliver to houses with the resorts, but won’t go way, way out there.”

Sound policy. Vehicles breaking through the ice used to be common, as were associated fatalities. Lyback says today’s emphasis on safety is at a premium and no one’s been hurt this year.

Still, everyone involved stresses there will always be an aspect about being on the ice that is truly crazy, truly dangerous -- even for families accustomed to life on the ice.

Families like the Christensons. Mike’s wife, Margie, said she is looking forward to their first family night nestled in the homey ice cabin some night soon.

“Claire’s 2 and Max is 3-month’s old,” she said. “I can’t wait for us all to get out there. We play games and tell stories. It’s such a great family thing to do.”

But she’s not sure how much fishing she’ll be doing.

“My job will be to keep the 2 year old from falling in one of the ice holes. There’s lots of stories of someone snatching a child or a dog an instant before they fall in the ice. I don’t want that to happen to Claire!”

Yes, in times when trophy walleye are caught and mounted each and every day, that kind of save will always merit catch of the day honors at magnificent Mille Lacs.
Posted by Chris Rodell at 12:31 PM