Pennsylvania proud to have Intercourse 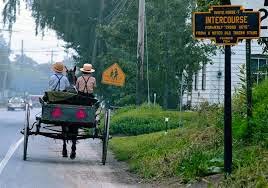 First of all, intercourse has nothing to do with Intercourse, so get your mind out of the gutter.

In fact, the only thing dirty about Intercourse are its gutters. And even they offer an historic, Old World charm, albeit the kind you’d want to avoid if you’re wearing your church shoes.

This Intercourse is the wholesome kind of intercourse the whole family can enjoy together without risking a televised introduction to Dr. Phil.

In an era when “Make Love, Not War” was a popular slogan, an innate fondness for Intercourse nearly kept fit-enough-to-fight Frank Howe from fulfilling his duties.

And you can bet many a soldier will read that and wonder, “Now, why didn’t I think of that?”

“It was 1971 and I was living in Chicago,” says Howe, 60. “I went to register for the draft. The lady took one look at my driver’s license and just started cracking up. She took it and passed it all around the building. She kept it so long I thought she forgot the reason I was there in the first place.”

Thus, the magic of Intercourse.

“There’s a popular T-shirt around here that says, ‘Virginia May Be For Lovers, But Pennsylvania Has Intercourse,” says Kurt Thomas, family owner of the primly named The Inn & Spa at Intercourse Village and the local Best Western.

Intercourse, pop. 4,865, is a thriving contradiction of randy and reserved, Thomas says, titillation riding shotgun with a Pilgrim sort of purity.

“We are a very traditional community with conservative values,” he says. “We have to walk a very fine line. For instance, if we called it the Intercourse Bed & Breakfast it might lead to an entirely different internet experience for people who might be otherwise innocently surfing the web for places to stay in Amish country.”

Swooning female fans may be unaware, but many were introduced to Intercourse by Harrison Ford. He played the lead in the 1985 film, “Witness,” filmed in and around the quaint little village, 60 miles west of Philadelphia, where every place you look you’ll see the signs of Intercourse.

Like Thomas’s quaint Inn, many local entrepreneurs insert the modifier “village” before business names (Intercourse Village Restaurant, for instance) so strangers aren’t disappointed by what’s on the menu.

Still, no one has dared open the obvious: Intercourse phone directories show no listing for an Intercourse Adult Video.

The stuffed pretzels are rolled out soft pretzel dough, filled with tasty combinations of local meats, jams or relishes and baked.

So how was Intercourse conceived?

One theory says the it was at the entrance of an 18th Century race course popular with pony-loving Scotch-Irish immigrants. In pre-spellchecker days, Enter-Course became Intercourse.

Another is “intercourse” was commonly used to describe the fellowship and friendly social interaction that took place here. Even today, the Oxford English Dictionary’s primary meaning of the word involves “communication to and fro between countries, etc.”

That then shifts the blame to Sigmund Freud (1856-1939). His theories popularized the analytical coupling of “sexual” and “intercourse,” thus dooming Intercourse to an eternity of teasing and titters from the kind of people who consider Adam Sandler’s humor refined.

Joel Cliff, of the Pennsylvania Dutch Convention & Visitor’s Bureau, says more than 11 million each year visit the area to revel in the never-waning fascination of Amish culture.

“The village is right in the heart of it all,” he says, “There’s a world-wide fascination with the Amish culture. It’s a way of life that people, now more than ever, are eager to relate to.”

It’s an area that, paraphrasing local promotional brochures, allows visitors to “slow down in a hurry.” Popular stops include the Kitchen Kettle Village with its 40 local shops and the Sights & Sounds Christian Theatre company.

“The Plain Folk” themselves make an unlikely tourist attraction. They were lured to  the area from Europe in the 1730s by William Penn’s promise of religious tolerance. Today, Europe is devoid of Amish, but the sect continues to thrive in a string of colorfully named Lancaster towns like Bird-in-Hand, Blue Ball, Paradise and Intercourse.

Although reluctant to be photographed, the Amish are sound businessmen who grew to understand the benefits of mingling with the people they call “the English.”

Clark says the Amish are the world’s best neighbors and employees.

“I just can’t imagine living anywhere else,” she says. “It’s a community with so much respect, caring and affection for one another.”

The woman from Intercourse admits to a hesitancy to use the word “love” to describe how she feels about the people and the place.

“Yeah, I guess the word is love. The people have a genuine love for one another.”