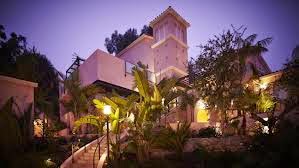 Any celebrities who’ve been feeling adrift over the two-year absence of one of Hollywood’s favorite heirloom hotels, can relax. The Hotel Bel-Air is back in business.

And when we say relax, we mean relax.

“This has since 1946 been an exclusive Hollywood retreat where celebrities come to escape,” says hotel spokeswoman Alisha Mahon. “It’s a truly intimate hideaway with Beverly Hills, Century City and Rodeo Drive still just minutes away.

“No other property in proximity allows this kind of luxurious seclusion. And that’s always been a big part of Hotel Bel-Air’s appeal to legendary stars like Marilyn Monroe, Grace Kelly, Nicole Kidman and Angelina Jolie.”

About 250 fired union workers are hoping today’s A-listers and other prospective guests act at the hotel’s Friday re-opening more like Claude Rains in the 1933 classic, “The Invisible Man.”

They don’t want to see anybody there.

They’re calling for a boycott and say the hotel used the renovations as a pretense to eliminate union jobs.

“We’re asking that no one eats, meets or sleeps at the Hotel Bel-Air until these employees are rehired,” says Leigh Shelton of Unite Here Local 11, representing 20,000 Southern California hospitality workers. “We’d like to see them get priority hiring consideration as jobs open up and reasonable compensation for what they’ve already lost.”

She expects 500 protesters to march from the hotel down Canyon Road to Sunset Boulevard. Protesters for Occupy LA are supporting the boycott against the hotel, owned by Hassanal Bolkiah, the Sultan of Brunei, who is perhaps 1 percent of the 1 percent, being known for owning nearly 2,000 luxury cars and a palace with 290 bathrooms.

Mahon says hotel security are working with local law enforcement to ensure safety for all involved.

It’s a discordant note to at a place of serenity so all-encompassing it’s where a beleaguered, but defiant Richard Nixon went to work on his 1978 memoirs and where in 2004 Oprah Winfrey celebrated her 50th birthday.

Mahon says the “top-to-bottom” interior renovations include a new spa and fitness studio, and 12 new canyon-clinging rooms with private infinity edge spa pools peering out over some of the continent’s most precious real estate. The renovations increase room count from 91 to 103.

The renovations are part of a wave of polishing being bestowed upon famed Hollywood properties catering to America’s glitterati. The Beverly Hills Hotel, the Peninsula Beverly Hills and The Four Seasons in Beverly Hills are also enjoying multi-million dollar refreshing.

“The Bel-Air is an L.A. institution that bridges the gap from what L.A. used to be to what it has become,” he says. “It has this grand aura the modern five-diamond luxury hotels can’t hope to match.”

It’s changed in other ways Skolnick understands more personally. His parents, Richard and Trude, were married at the Bel-Air in 1968.

So, is he the offspring of movie stars? The grandson of a Tinseltown titan?

“My grandfather, Max Gottleib, was a fruit vendor who delivered fruit out of a truck to customer’s homes,” Skolnick says. “He was able to pay for two college educations and a wedding at the Hotel Bel-Air on a fruit vendor’s wages. It shows how things in L.A. have changed.”

Indeed. Rooms at the newly renovated Bel-Air start at $565 per night; the palatial presidential suite goes for $13,500 per night.

Better get busy peddling those apples.

When Sultans get Occupied