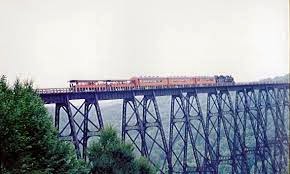 A new vertigo-inducing see-through skywalk at the Kinzua Bridge State Park will remind awestruck visitors at the northcentral Pennsylvania park why the structure was once the eighth wonder of the world.

And if they time it right, they might get to meet the man who today qualifies as a world wonder unto himself.

That would be 96-year-old Odo Valentine.

First some history about a structure that’s properly historic.

The Kinzua railroad bridge was built in 1882 to speed trains loaded with coal and timber to market via the Great Lakes. At 301-feet above the valley -- 24 feet higher than the Brooklyn Bridge -- the bridge traversed a 2,053-foot gulf of sylvan splendor.

It pulsed with commercial railroad traffic six days a week, but on Sundays it was crowded with pleasure riders who came from all over to experience the tracks across the sky.

“There were no airplanes so if anyone wanted to experience what it was like to fly, they’d take a Sunday train across Kinzua,” says Linda Devlin, executive director of Allegheny National Forest Visitor’s Bureau. “It was world renown.”

It was rebuilt in 1900 by famed French railroad engineer Octave Chanute, who would become better known as the Wright Brothers tutor and was eulogized in 1910 as the father of aviation.

Upon completion of the Kinzua restoration, Chanute boasted the bridge would stand 100 years.

Today the Kinzua skywalk perches atop six now repaired towers and concludes with an octagon-shaped skywalk with reinforced glass views to the valley below.

And maybe the only thing more incredible than the view is the story of Mr. Valentine, a barnstorming pilot determined to make his mark.

“When I was a kid just starting to fly, I told my dad one day I was going to fly through Kinzua bridge,” Valentine says. “And he said, ‘Son, if you’re going to do it, you’d better have someone take a picture ‘cause no one’s ever going to believe it.”

On July 4, 1939, he flew a propeller-driven biplane with a 32-foot wingspan perpendicular between the 64-foot center spans at 110 mph. One gust, one slip, and Valentine would be leaving a different sort of mark on Kinzua.

He deliberately chose July 4 because he knew everyone would be at a nearby holiday parade.

He immediately began squelching rumors of the stunt when he learned bridge owners were livid and determined to sue if they ever caught the reckless pilot, who was sure to lose his license.

For 70 years the high flyer laid low. He never told a soul. He swore the cameraman and another witness to secrecy.

No one ever found out. He never lost his license and went on to be a decorated pilot trainer in World War II and the Korean War who enjoy friendly associations with famed aviators Eddie Rickenbacker and ballplayer/ace Ted Williams.

“When the bridge came down, I thought I’d see if I could find that picture up in the attic. I was sure my wife had thrown it away.”

She hadn’t and Thursday, Valentine will be the guest of honor at the bridge were fame’s been deferred more than seventy years.

Will wonders never cease? Apparently not at Kinzua.