King Pacific Lodge: Rolling on the river with world's only migratory hotel 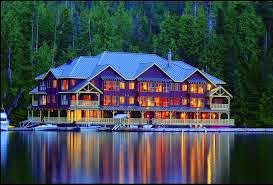 AS COMMUTES GO, Robert Penman’s is a real bear — an agonizing, full-day, 116-mile slog along a relentlessly twisting river. What’s more, he’s surrounded by wild animals. “It’s wildlife the whole way,” he says. “Pods of orca, humpback whale and porpoise.” The trip is all part of the annual restoration of the King Pacific Lodge, the world’s only migrating luxury hotel.

Each spring since 1999, the four-story lodge, along with around 5 tons of provisions, are towed over 24 hours in two sections from Prince Rupert to a primal wilderness deep in British Columbia’s majestic Great Bear Rainforest. It’s accessible only by float plane, and guests pay up to $15,000 to stay for four days, splurging amid a wilderness so untamed that mist from whale spray shimmers on the windows.

The only thing more daunting than the colossal insurance premiums involved in transporting a multimillion-dollar lodge across tricky currents and ocean channels, often through dense fog, is the logistics. “We need to provide everything from toilet paper to toothpicks,” says Penman, the general manager. “Chandeliers, china and glassware all need to be secured. It’s like setting up a resort every year from scratch.”

Then, after a mere 110 days of euphoric ridgeline hikes, fiy-fishing for trophy salmon and encounters with endangered Kermode bears (like a black bear but with white fur), it’s time to say goodbye, pack everything up and return to Vancouver for the winter. Not so much as a grape stem will remain behind as evidence of all the summer splendor. “It’s always very melancholy when the season draws to a close and we’re all packing up and heading for home,” Penman says. “But it’s a comfort to know the lodge will be ready to return in the spring.”
Posted by Chris Rodell at 7:28 PM