The King & The Keys: What 66 Keys to Cities gets Arnold Palmer 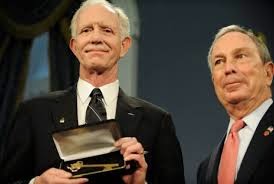 Grateful mayors from 66 cities across America have given Palmer ceremonial keys to their cities. Kingdom correspondent Chris Rodell unlocks the doors of understanding to what it all means to Palmer.

The situation seems dire. The staff at Arnold Palmer’s Latrobe headquarters is unable to find the key to unlock the display that holds all the other keys, the ones that potentially unlock a land of adulation, hospitality and -- who knows? -- maybe a free order of french fries or onion rings at some local diner.

Everyone knows about Palmer’s golf club collection, his numerous trophies and the memorabilia accumulated over more than five decades of legendary living.

But not many know that Palmer has another collection, one that if old customs prevail, would lead to a feudal sort of Kingdom even someone as prosperous as Palmer could only imagine.

In theory, at least.

Because Palmer is the recipient of at least 66 keys to the city from U.S. municipalities stretching from Maui, Hawaii, to Atlantic City, N.J., with dozens of keys to places like Sparks, Nevada, Raytown, Missouri, and Dayton, Ohio, scattered in between. String them all together in a necklace and Palmer would look like a dandy sort of warden to a really festive jail.

“As you can see, they’re from all over the country,” says Palmer assistant Doc Giffin. “Some of them are quite elaborate.”

The one that finally unlocks the case, however, is not. It’s a nondescript little chunk of once-molten metal not much bigger than a quarter. After trying a handful of nearly identical pieces, Giffin finds the one that works.

The keys are liberated for review. Giffin’s correct. In a world where even the fanciest five-diamond hotels have glum pass “keys” that silhouette identically to mass produced credit cards to now disgraced banks, many of the keys to the cities given to Palmer over the years are minor works of art. They are festooned with gems, ornamental engravings and fancy shapes that reflect well on the artist and the cities themselves.

The custom of bestowing keys to the city dates back to medieval times when municipalities were protected with high walls and imposing gates designed to keep marauding hordes at bay. Visiting diplomats, knights and dignitaries were given actual keys to the city that allowed them to pass through the walls unmolested by taxes, inquiries or nasty deterrents like boiling vats of oil.

Once inside the fortified walls, the honored guests were treated to fine roasts, heady spirits, soft beds and often the tempting company of a comely wench or two.

Times change. Giffin assures nothing of the sort has ever happened with a gentleman like Palmer. In fact, he can’t recall a single instance where the key to any city got Palmer anything.

“It’s all very ceremonial,” he says. “There are proclamations and presentations, speeches and handshakes, but nothing tangible other than the key.”

Well, that’s no fun. Shouldn’t he be able to present the key at, say, a Skyline Chili outside of Cincinnati, a place that once gave Palmer the key to the Queen City, and enjoy free bowls of the  city’s tasty mainstay while on his way to play a round at the APDC design at TPC at River Bend.

You could bet if he was ever in town to check out the beguiling Cotton Creek and Cypress courses, both APDC designs, at Craft Farms, near Gulf Shores, Alabama, the friendly folks at the famous Florbama Tavern would be happy to give him some quenching beers on the house after a day golfing under the Dixie sunshine. The courses and landmark tavern are located in Baldwin County, a locality that has the distinction of once granting Palmer the key to the whole dang county.

If he held them to their word, Palmer could own Orlando, a place that gave him a key to the city on March 17, 1970. But that might be a tad redundant. He and Mickey Mouse already sort of co-own the whole joint anyway.

City ownership may be a bit of a stretch, but one mayor who was thrilled to present Palmer with a key to her city says most cities would find a way to honor the thought behind the presentation, but it’s not exactly a get out of jail free card.

Former Erie Mayor Joyce Savocchio assures us that the key to the city will grant Palmer  a lifetime of freebie hospitality in the friendly Pennsylvania city.

“I don’t think you could take it from store to store and grab all you want, but if Arnold Palmer would be so good as to come back to Erie, I’ll  personally see that he could use his key to the city to treat himself to all the finest we have to offer,” she says. “He’d have a great time and we’d all be glad to see him again.”

A group of Erie businessman and women were able to persuade Palmer to come attend the Greater Erie Charity Golf Tournament at The Kalikwa Club in 1994.

Savocchio, a popular three-term mayor from 1990 to 2002 when term limits ended her tenure, said the day was one of her favorites as mayor.

“It was absolutely fantastic,” she says. “We knew what a busy man he was, but he couldn’t have been more kind. I’ve always wondered if he knew how much it meant to the people of Erie for him to come to town and spend time raising money for us. It was truly special.”

She said mayors have discretion to commemorate famous locals or visitors with proclamations and keys to the city. She gave Palmer both. It was Arnold Palmer Day and he got the key to the city.

She invites Palmer to come back at his convenience for dinner at Bertrand’s, the popular French restaurant off Perry Square in downtown Erie or for steaks at Under The Clock. He’d be welcome for free lodging, too, at the posh Sheraton near the heart of town, she said.

Savocchio says she was stingy about giving keys always, believing the honor should be preserved to ensure it’s prestige. She said she gave out fewer than 100 during her 12 year term. Other recipients include Dan Quayle, Bill Clinton, Bishop Desmond Tutu and -- a personal favorite of hers -- the great Chubby Checker.

“Oh, I loved him,” she says. “He was thrilled to get his and said no one had ever given him a key to the city before. He said if we ever needed a favor, he’d be happy to help. And he did. A few years later I was putting together ‘We Love Erie Days!’ and needed a headliner. His promotion people refused us saying we couldn’t afford him. I got in touch with him and he knocked $7,000 off his usual fee and came and put on a great show for us.

“Still, the key to the city I presented to Arnold Palmer was the best one I’ve ever given. Everybody loves Arnie.”

Looking over the spread of keys from localities all across the country is like hearing Johnny Cash sing the “I’ve Been Everywhere, Man” song from the popular commercials featuring a national hotel chain. It would be fun to hear Palmer recite the names of all keys to the same tune made famous by Cash:

Some recent or unusual key recipients include hero pilot Chesley “Sully” Sullenberger, who was awarded keys to New York City and his hometown of Danville, California, for safely crash landing his USAirways flight into the Hudson River and saving the lives of 155 crew and passengers.

The Big Apple also gave keys to Capt. Richard Phillips and crewman William Rios for their heroic roles aboard the Maersk Alabama after it was hijacked by ill-fated Somali pirates.

Detroit has an eclectic group of key recipients. Award-winning composer and pianist Geri Allen has one, as do Detroit Red Wing great Steve Yzerman and Detroit native and Pittsburgh Steeler star Jerome Bettis. The trio make unlikely company with then-Iraqi President Saddam Hussein who was given a key in 1980 by then-Mayor Coleman Young for having donated hundreds of thousands of dollars to a local church.

Detroit has never given one to Palmer, though. Maybe the city should consider revoking Hussein’s and giving his to Palmer. It might help change the struggling city’s fortunes.

Really, as welcome as the ceremonial trinkets are, Palmer doesn’t really need a key to unlock all the doors to any city.

He long ago secured keys to the hearts of most of the people around the world and that’s been worth more than the most lavish and sparkling metropolis could ever hope to offer.