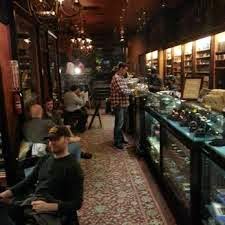 The pinky-ringed wise guys used to exchange oddly collegial nods with their federal antagonists as the men, nearly all of them packing, gathered at Florio’s Grill and Three Little Indians Cigar Bar under a blessed communal ceiling of uniformly good smoke. That was before owner Larry Amoruso opted to side with the saints -- the constitutional ones -- and cater exclusively to the Secret Servicemen, military and city police who like to frequent Florio’s in the throbbing heart of Manhattan’s Little Italy. He proudly displays a thick leather-bound folder behind the well-stocked bar that holds the business cards of hundreds of decorated law enforcers and service officers from around the world.

Trim and practically crackling with a righteous mix of heartfelt patriotism and rib-jabbing wit, Amoruso says he made a conscious decision to “phase out” the mobsters then did so with chilling efficiency.

And how does one “phase out” mobsters?

“Stop giving them free stuff,” he says. “Charge ‘em and they stop showing up.”

Now, the only outlaws who feel welcome at Florio’s are the men and the occasional women who lean against the rich mahogany bar and put flame to tightly rolled leaves of smokey splendor.

“Right now, what you’re doing is against the law,” says Amoruso, to two otherwise-law abiding gents smoking robust house blends and sipping high-end bourbons neat. He points out that the state legislature banned smoking in New York in March 2003 and Mayor Michael Bloomberg has been zealously trying to close loop holes that allow places like Florio’s to offer guests a place to smoke.

“They want to eliminate all smoking and that includes cigars in places where men and women have been enjoying cigars for decades,” Amoruso says. “They’re making cigar smoking a criminal activity.”

If that’s the case, well, an increasing number of cigar lovers -- including a host of New York’s finest -- are being drawn to the dark side. Because to criminalize cigar smoking in New York, a city whose brawny lawlessness has always been a part of its brash swagger, is like banning horses from John Wayne movies. It’s like prohibiting sunsets from romance or saltiness from seafood. The two are inseparable.

Few cities in the world have places of such abundant ambiance for luxuriating in a fine cigar, places where a day up in smoke doesn’t signify wasted time. Rather, it means something sublime.

And, guaranteed, when you draw on a cigar in any remaining Manhattan cigar shop, club or restaurant, you’ll draw more than smoke. You’ll draw people of character.

“The leaf literally breaks down all the social barriers,” says Ron Melendi, general manager of De La Concha at 1390 Avenue of the Americas between 56th and 57th Street. It’s the place with the lone wooden Indian out front and all the animated people inside.

“Smoking a cigar is all about the experience,” says Melendi, a fourth-generation Cuban-American and the grandson of cigar legend Jose Melendi, a master roller and blender whose palette was so refined he could tell with one toke a cigar’s country of origin and, if it was a fine Cuban, precisely which region yielded the treasured seeds. “A cigar shop is different from, say, a bar. You get people from all walks of life in here, same as a bar, but here everyone has a passion for cigars as a common bond. They like to learn about the leafs, the blends and they like to share their passions with fellow smokers. Bars are just places for people to go. You don’t find too many people who get passionate about Budweiser.”

A cigar is a commitment to conversation. Lighting a single cigar is a decision to dedicate the next hour to idleness. It can’t be rushed. You can’t chug a cigar. In companionable company, a lit cigar is a smoldering ice-breaker. That’s why men like Rudolph Guiliani and the Rev. Al Sharpton, two regular De La Concha customers who disagree about most everything, can find common ground during Saturday smokes amidst blue collar aficionados who’d rather jaw about baseball than the causes and corrections of social injustice.

De La Concha customer Richard Lemerise is man who spends his working hours professionally encouraging the growth of green leaves and his leisure ones smoking tightly rolled brown ones. He’s the controller with The Horticultural Society of New York, a group who’s motto is the wonderful Greek proverb, “A society grows great when old men plant trees in whose shade they know they will never sit.” He says he’s learned the art of making friends one cigar at a time.

“You never fail to enjoy an invigorating conversation with someone smoking a cigar,” he says. “Debates can be lively, but they’re never bitter. Some of the best conversations I’ve ever had are through the gauze of smoke. A cigar ensures great company.”

Or not. New York has plenty of places where smoking solitarily is something to be exhalte. Try it on the promenade of the historic Brooklyn Bridge (yes, it’s still perfectly legal there). Watch the traffic stream by below. Think of people in the cars. Are they happy? Are they loved? Take a deep drag and stare at that skyline of lower Manhattan. Think of the men and women who built it and make it hum. Think of the day when that magnificent skyline was so violently altered. Say a prayer for those who perished. Be thankful you weren’t one of them.

See? There’s something about cigars that unearths the deepest of thoughts. Most smoke obscures vision. Cigar smoke has a way of sharpening it. Clarity ensues.

It’s why the blues sound so much more soulful after a robust Cohiba at the posh Carnegie Club, 156 W. 56th St., why the raven-haired cocktail/cigar waitresses there are so beguiling, or maybe it’s a charm they just come by it naturally.

The club is one of a handful of citadels that defiantly reject city demands that they cease smoking because the mayor’s office says it is valiantly protecting worker’s from the ravages of second-hand smoke. Certainly, nobody wishes any harm to the Carnegie Club lovelies, or even homely employees, but closing places like The Carnegie Club is going too far.

Traditions are being trampled. The ghosts of American legends can still get a great steak at Keen’s Steakhouse on 72 W. 36th St., but they won’t find a ghost of smoke in a place that’s world famous for it.

“We have more than 90,000 churchwarden pipes here,” says restaurant manager Bonnie Jenkins. The elegant, long-stemmed clay pipes were a hallmark of the restaurant from 1885 when it opened as a popular haunt of local thespians. As a pipe club, Keen’s would sell memberships to smokers and then store their fragile clay pipes for the members.

Today, besides being an outstanding steak house, Keen’s is a peek at what the future of New York cigar-friendly restaurants might be. Pipes signed by Teddy Roosevelt, Mark Twain, Albert Einstein, Babe Ruth, Will Rogers, Buffalo Bill Cody sit in well-lit, locked display cases.

“It shows how times have changed,” she says. “We have some vintage ads here from the 1930s that urge readers to enjoy a Camel after dinner because smoke aids digestion. The smoking ban did hurt us at first, but we realize the world is changing. We know now that smoking, for instance, does not, in fact, aid digestion! We haven’t had anyone smoking in Keen’s since the ban. These days, when a celebrity comes in, they can’t smoke, but we still have them sign one of the pipes for the sake of tradition.”

Ironically, one of the pipes is signed by Mayor Michael Blooomberg. It was signed just days before he affixed his signature to the December 2002 city order banning smoke in workplaces.

Back at Florio’s and the Three Little Indians Cigar Store, tiny ceramic bowls that look more suited for cereal are filling with tiny gray pyramids of tubular ash. Frank Sinatra’s singing a giddy ditty about a loopy kind of love. Model military airplanes and helicopters hang from the ceiling above the bar. Two ceremonial swords, representing Amoruso’s years of service with the U.S. Marines Corps, hang above a cooler. He’s coy about his military history, but proudly shines a flashlight on a plaque inscribed with the oath taken by members of the Secret Service. Like many restaurants and taverns in Little Italy, Florio’s has snapshots of the owners with cast members of the Soprano’s but they are posted in positions less lofty than the ones reserved for the service men who wield weapons for different reasons TV gangsters. One shows Amoruso in a brotherly embrace with General Peter Pace, U.S.M.C., Chairman of the Joint Chief’s of staff.

The food here is some of the best in Little Italy. If the government sends these Three Little Indians off to the reservation, Florio’s will survive, but, clearly, Amoruso not the kind of man who’ll go down without a fight.

“I’m not giving up,” he says. “This isn’t just about smoking a cigar. This is about freedom. This at its heart is a cause around which all Americans should rally.”

Listen carefully through the thick New York accent and you’ll hear an echo of another freedom fighter, a man who vowed to fight an altogether different sort of tyranny on the beaches, on the seas and oceans, in the fields and streets. A man, perhaps the world’s most famous cigar smoker, who would never surrender.

Winston Churchill’s devotion to cigars -- he smoked up to 10 per day, or over 250,000 throughout his 90 years -- was so great that the term Churchill became synonymous with his favored type of cigar, one measuring at least seven inches long with a robust ring gauge (width) that was nearly 3/4 of an inch.

Churchill biographer Robert Lewis Taylor wrote in 1955 that the prime minister’s face presented a “heroic visage that stands out in healthy contrast among the cautious, remorseful” imbibers who tea-total their way through gray lives untouched by convivial merriment.

Read the dreary headlines and you’ll certainly agree we could all use a little Churchill these days. It matters not if it be in high office, or in a tiny bar in lower Manhattan where the food’s good, the company’s warm and the prevailing wish is that in a world that hopes for clear skies, there’ll still be pleasant places where the smoke never clears.