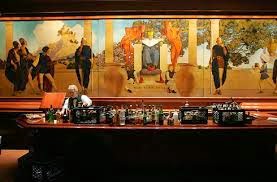 Until recently, the glossy guest service directories at The New York Palace justifiably boasted about the splendid rooms and suites, the finicky service and the dainty amenities that kept some of the world's most demanding guests coming back over and over again. Its pages answered every question and desire guests could want.
All, but one:

"Say, where can a fella get a drink around here?"
One of the finest hotels on the planet didn't have a place to wet your whistle. Well, that's all changed. Now all the year-old Villard Bar and Lounge needs to join the pantheon of historic Manhattan hotel bars is a little bit of history.

More than 33 million tourists still visit the Big Apple each year to see the old landmarks, the living legends and -- cross your fingers -- a glamorous celebrity or two. What many of them fail to realize is that they can often see all three unwinding in the classic hotel bars where generations of stars from Bette Davis to Cosmo Kramer have deigned to drink.

The Oak Bar at The Plaza, The Bull & Bear at the Waldorf-Astoria, The King Cole at the St. Regis -- ah, if these bars could talk.

Sure, if they could talk, they'd probably slur their words. After all, they have absorbed decades of spilled spirits. But give them a cup of coffee and a good night's sleep and, oh, the stories they could tell.

The Oak Bar, Plaza Hotel -- Look one way and you'll see the handsome cabs, coachmen and their horses awaiting fares to take on a romantic ride around Central Park. Look the other and you'll see the Everett Shinn mural of the same scene. In the Oak Bar, the oil painting is the one where tourists tend to aim cameras most often. It was beneath this mural where Alfred Hitchcock trained his camera on dashing Cary Grant for a scene from North by Northwest. Recent celebrity-sightings include frequent hotel guests Kevin Costner and Al Pacino. Besides the views of the park, the bar offers enormous raisins for drinkers to nibble in between sips.

The Gramercy Park Bar at the Gramercy Hotel -- Opened in 1924, Humphrey Bogart thought this was the perfect place to celebrate his perfect love for actress Helen Menken. Babe Ruth was a frequent drinker here, too. Sure the Sultan of Swat drank lots of places and Bogart divorced Menken and married three more times, but that doesn't diminish the cool factor. The Duke and Duchess of Windsor stayed here, and so did Bette Davis. Staying at the hotel gives guests a chance to visit Manhattan's last private park, a sylvan gem built in 1831, and accessible only to area residents and hotel guests.

The Halcyon Lounge, RIHGA Royal Hotel -- Dustin Hoffman doesn't just come here to be entertained; on some nights he provides it. Hoffman has been known to stroll up to the piano and tickle the ivories for delighted guests. Opened in 1990, the hotel has been popular with West Coast entertainment types who enjoy the all-suite accommodations and high-tech gadgetry in each room (everything from video phones to $700 ergonomic and electronically-heated bidet toilet seats). Keanu Reeves, The Black Crowes and Pete Townsend have been recent guests. Michael Richards (aka Cosmo Kramer of Seinfeld) stops in for pre-theater cocktails and entertainment.

The Bull & Bear, Waldorf-Astoria -- The bar oozes enough power to brighten a month's worth of California blackouts. A stock ticker runs throughout the day there are so many cell phones ringing around the circular bar that it seems like everyone at the bar is talking to someone who isn't. The bartenders date back so long and the regulars are so loyal that drinkers will not sit in another's section, preferring to stand until some discreet stool-shuffling can be done. Herbert Hoover, Douglas MacArthur, Cole Porter, Prince Rainier and Princess Grace have tippled here.
Oak Room, Algonquin Hotel -- Named one of the top ten historic bars in America by Historic Traveler magazine. Today the stately bar features some of the country's best jazz and cabaret acts, entertainment that's displaced some of the world's most renown conversation. Dorothy Parker, James Thurber, Harpo Marx, Robert Benchley and Eugene O'Neill were regular participants in the nightly salon that became known as the Algonquin Round Table. Its legend was so alluring that John F. Kennedy once said he had only three wishes when he was growing up: "To be a Lindbergh-type hero, to learn Chinese, and to become a member of the Algonquin Round Table."

The Madison Club, The Roosevelt Hotel -- An ultra-hip hotel guide disparagingly referred to this as being reminiscent of "a very nice airport lounge -- the kind you enjoyed before they all turned into the fast-food court at the mall." That's unfair. Overlooking the spacious, bustling lobby, the room manages to harken back to a bygone, progressive era that captures the spirit of the Roughriding president for whom the hotel is named. Rich mahogany paneling, stained glass windows and deep cushioned leather chairs and the multi-national guests atop each barstool make this an exciting and entertaining bar in which to enjoy Happy Hour or many happy hours well into the night.

The King Cole Bar, St. Regis Hotel -- Dominated by the 28-by-8 foot eponymous mural, rocking pianist Billy Joel can be seen peering up at the jolly old soul here. In fact, most all the guests -- even the regulars -- spend a good bit of staring at the beguiling Maxfield Parrish illustration. Commissioned by Col. John Jacob Astor, a noble gentleman victim of the Titanic, in 1906, the painting dared to connote the reactions to an inappropriately regal odor. The result is nothing to sniff at. The visage of the embarrassed king manages to help make the place elegant without being stuffy.

Villard Bar and Lounge, The New York Palace -- The hotel fittingly describes itself as a "palace" and it's opened a watering hole deserving of contemporary royalty. Designer Pierre Court spent $3 million to create what he calls a sense of "yesterday's Monarchy Courts with a dramatic Victorian style." In fact, the only difference between this plush two-story room and many of the sitting rooms in palace at Versailles is that here the peasants are welcome to belly up to the bar and shout, "Barkeep, bring me a brew! And I mean now!" without being sentenced to the stockade.

Hogs 'n' Heifers, 859 Washington St., Chelsea, 212 929-0655 -- Harrison Ford, Julia Roberts, Dennis Quaid and Drew Barrymore have danced on the bar at the this urban roadhouse biker joint where all the bar tenders look like James Bond villainesses. Hundreds of bras, including those of Roberts and Barrymore, conceal a moose head above the plywood bar.

McSorley's Old Ale House, 15 E. 7th St., East Village, 212 473-9148 -- Fact: McSorley's is the oldest tavern in the U.S., dating back to 1854. Opinion: It's also the friendliest. Bartenders don't get to work here until they can carry 13 8-ounce glasses of suds in each hand. It looks like they're carrying trays of wagon wheels. Abe Lincoln is reported to have imbibed here.

Old Town Bar, 45 E. 18th St., Gramercy Park, 212 529-6732 -- Used to be featured in the opening to the old David Letterman Show. Bartenders are friendly and quick with the "buy-back" tradition. That means if they don't buy you one after you've bought more than four, you're either a jerk or not tipping enough.

Chumley's, 86 Bedford St., Greenwich Village, 212 989-9038 -- An unmarked bar -- it used to be a speakeasy -- so hard to find that you'll be the only tourist in the place. James Joyce used to be chummy with the bar owner, Lee Chumley, and is rumored to have written several chapters at the corner table. Spend the night here and you'll feel very hip about yourself, even though you'll never be able to convince friends you were ever even there. Because you'll never find it again.

White Horse Tavern, 567 Hudson St., 212 243-9260, Greenwich Village -- A truly authentic New York tavern full of quiet nostalgia. This is where Bohemian poet Dylan Thomas drank himself to death in 1953. His picture still haunts the place, but don't let it disturb you. He was rumored to have had a really great time up until the end.
Posted by Chris Rodell at 12:30 PM