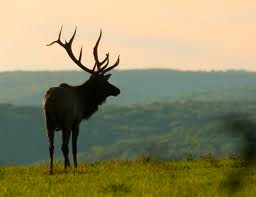 In one of America’s biggest conservation success stories from the last century -- both in size and scope -- the once-decimated herd are thriving and people whose armed ancestors hunted them to extinction are now mostly shooting them with cameras.

“They’re coming from all over,” says Janet Colwell, a local guide who with her husband Jeff run Hicks Run Outfitters. “We take them on tours and they see bear, deer, turkey, coyote, but the highlight is always seeing a big bull elk and hearing it bugle.”

They should think about spending an afternoon in Rawley Cogan’s office.

“I’m looking out my window and there are about 100 elk out there right now,” says Cogan, president of the Keystone Elk Country Alliance.

His office is located in the year-old $11 million Elk Country Visitor’s Center near Benezette in the heart of an 835-square-mile, Yellowstone-sized region the Keystone State is promoting as the Pennsylvania Wilds.

He said the public-private partnership that built the center projected 40,000 people would make the trip to learn about and experience the elk.

The center features a state-of-the-art 4-D (sight, sound, smell and touch) theater, interactive displays, dioramas depicting bull and cow elk that can in the wild weigh as much as 900 pounds and 500 pounds, respectively.

Wagon rides over the trails afford visitors the opportunity to observe the elk in the same social situations that make human reality TV so compelling.

They frolic, they fight and become involved in truly natural couplings that eventually lead to the spring births of 40-pound calfs that look remarkably deer-like for animals that will soon dwarf their genetic cousins by eating up to 20-pounds of grass each day.

Colwell says the Pennsylvania Wilds has always had the creatures. Now, it’s getting the comforts.

“In the last five years, we’ve seen a lot of new lodges and restaurants spring up,” she says. “Now there are places to eat and places to stay. It’s attracting lots of people.”

The Nature Inn at Bald Eagle State Park, like the visitor center 75-minutes away, is another example of a successful public and private partnership working to increase tourism. The $9.6 million 16-room inn is several elegant steps above the rustic nature of many state park lodges and is earning raves for its sophisticated application of green technologies.

Elk hunters vie for roughly 50 lottery licenses each fall. The number fluctuates depending on the health of the herd.


“A well-maintained herd is a tremendous resource to Pennsylvania,” Cogan says. “I like to think we’ve figured out how man and elk can share the landscape to the benefit of both.”