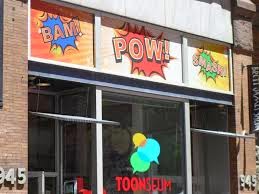 You can sleep with superheroes on the fifth floor at the Wyndham Grand in the heart of Pittsburgh’s Golden Triangle.

They’re all there. Wonder Woman. Batman. The X-Men. The Green Lantern.

But be warned: It won’t all be acrobatic, pulse-racing -- Wham! Bam! Shazam! -- lusty fun.

You’ll be sleeping with Homer Simpson, too.

It’s the ToonSeum Suite, conceived in honor of the nearby ToonSeum (“A Museum with Character!”), one of three American museums dedicated to a pop artwork that is growing up even as it never grows old.

It may be the only hotel suite in the world where guests are actually encouraged to doodle on the desk.

For murky security reasons, Martin says the actual room number is only revealed to guests who’ve paid the starting at $129 per night suite price.

Why is a mystery. Only a villainous fool would want to instigate trouble in a room where Dr. Bruce Banner seeks solitude.

The themed suite was conceived by self-described idea man -- “Idea Man!” -- ToonSeum executive director Joe Wos. He is forever restless in his eagerness to promote a museum that is much like the artwork it represents: ToonSeum, just 1,500 square feet, is slim, but packs a real punch.

A former resident artist at the Charles Schultz Museum in Santa Rosa, California,, Wos said he was inspired to develop ToonSeum after a 2002 visit to the Cartoon Art Museum of San Francisco (New York has the Museum of Comic and Cartoon Art).

The unaffiliated trio share a mission to promote greater appreciation for an embraceable art that is increasingly driving pop culture.

Wos says the displays are designed to appeal to the artistic interests of their core audience -- “anyone between the ages of 6 and 106,” he says. Famous visitors since opening in 2009 include actors Jeff Goldblum, Jake Gyllenhaal and Anne Hathaway.

Everyone is invited to sit and scribble at a genuine 1930s drawing table purchased from the original Disney studios. For added authenticity, Wos and gallery manager John Mattie promise to stand over your shoulders and despotically berate you for incompetence as Disney cartoonists complained was often the case.

The superheroes and their cartoon counterparts are helping Pittsburgh seize on its claim to being the birthplace of American pop culture (first radio station, first movie theater, birthplace of Andy Warhol and home of the renown namesake museum).

Sorry, you’ll have to visit ToonSeum.

Because in the words of one of America’s most expressive cartoons . . .