Wintergreen Resort gives pedicures for all the manly fellows 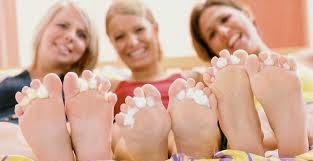 She brought the sundae out on a little tray. There were big scoops of strawberry, chocolate, vanilla and an oozy river of creamy caramel. How could I resist? I did what any red-blooded American male would do.

I dunked my big cracked, calloused and stinking feet right in the whole gooey mess and began wiggling my toes.

I was at the cloud-clinging Wintergarden Spa at the Wintergreen Resort in the Blue Ridge Mountains. My spa options included standard sports massage and manicure, but I decided to treat the most abused and maltreated part of my entire body.

I decided to treat the feet.

I try and comport myself as a gentleman. I wear nice clothes, exercise and address people with refined manners. But if I am, indeed, a gentleman, my feet are outlaw bikers. They’re scarred, mean-looking rascals. Tattoo-like bruises mar several stubbed toes and one ragged nail makes the left foot look as if it's walking around brandishing a drawn knife and looking for a fight.  If you saw them by themselves strolling down the sidewalk without the rest of me to soften their appearance, you’d cross the street.

But despite their haggard appearance, I’ve always considered them to be a pair of sissies. They whimper barefoot on a freshly mown lawn and practically shriek out loud when subjected to things like hot beach sand or pool-side asphalt.

The $75 sundae treatment, which includes soothing elements that mimic ice cream in scent and texture, sounded like the perfect splurge.

“You can’t eat it, but it always makes me hungry,” said pretty blond pedicurist Ashley N. as she began to massage my tooties after they’d been soaking for 10 minutes in a warm pool of strawberry-scented water.

It didn’t take long for my feet to fall in love with Ashley. No one had ever treated them the way she did and for the first time I began to understand men for whom the foot is fetishized, and wishing I’d found a woman who felt that way. She rubbed, massaged them with manicured fingers and charmed them when she daintily turned away to cough, rather than risk offending a foot. It was very sweet.

And Ashley was into it.

“My friends are always asking me, ‘How can you rub some of those ugly feet?’ she said. “I tell them I can rub any foot that’s been soaked clean. But you have very nice feet. I can tell you take care of them.”

Beneath the dark chocolate scrub, I could tell the boys were blushing. They were unaccustomed to such flattery.

For me, the foot massage was a heavenly revelation. It was better than any back massage I’d ever gotten. Sure, the back has its burdens, but when you think about it rationally, what part of the body undergoes more daily punishment than the feet.

I confess, too, that the encounter left me feeling playful enough to ask  Ashley for another act of intimacy that, try as I might, I couldn’t conceal from my wife and daughters. And then I strode out of there on refreshed feet, still a red-blooded American male confident in his stride and the future of his feet.