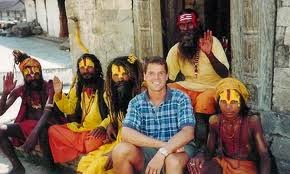 (Smiling Charles Veley, bottom row, second from left in blue print shirt, with wrist watch, is among the world's most traveled men or women).


It’s the kind of story with which many road warriors can relate. Charles Veley found himself at the mercy of a careless guide and wound up stranded without his essentials.

The situation required resourcefulness. So what did he do?

“We watched the helicopter fly away and hoped we wouldn’t be abandoned to die on one of the world’s most godforsaken islands,” he says. “There is no wood in the Antarctic so there would be no fire. The three Chilean sailors and I built a shelter from the expedition’s few remaining pallets -- just five out of 60 -- that hadn’t been heli-slinged off the island. We huddled together inside the make-shift shelter and hoped someone would come back to save us. The nearest help was five days away.”

Veley, 45, is the world’s most traveled man. He’s been to 823 of the world’s 872 countries, enclaves islands, territories, etc. It all happened during a prolific burst of travel from 2000 to 2008 that is unrivaled in the history of mankind.

These days, the married father of three still travels about 200,000 air miles a year as the founder of Microstrategy, a Vienna,Virginia, business software company he founded.

So who better than he to offer tips on how to navigate the many splendored hassles that involve getting modern humanity from here to there?

“Every airport looks less threatening the second time you see it,” he says.

The second best advice from this lively and engaging gentleman is contrary to his every instinct that kept him alive in many dangerous situations in remote places where lawlessness reigns.

“To deal with routine travel today, all the hours of waiting, all the delays, the best advice is to just turn your mind off,” he says. “The great thing is to have an iPhone or a Blackberry that lets you plow through your to-do list.”

For most travelers, the days of affable porters hauling stickered steamer trunks stuffed with gowns and goodies are gone. Universally, Veley and experts insist the best way to travel today is to always arrive early and pack light -- and their idea of packing light may be vastly different from yours.

“I can be gone for five weeks and get by with just one carry on,” says Beth Whitman of www.wanderlustandlipstick.com. “If I can’t carry it on, I don’t take it.  I wear multiple layers of the heaviest items on the plane and pack the lightest stuff in the carry on.”

She swears by a nifty Eagle Creek compression sac that does to your duds what similar kitchen appliances do to your leftovers.

“It condenses everything down to more than a third of its size,” she says. “It’s amazing. Then the first thing I do is tell the people you’re visiting to get used to seeing you in the same thing over and over. People understand.”

In these days of airline baggage fees of between $25 and $50 per bag, many globetrotters are finding it more efficient to simply ship their bags. It costs about $50 to ship a bag from New York to San Francisco five days in advance. Shipping, too, will save you check-in time and counting luggage laps at the baggage carousel.

As a wheelchair-bound frequent flier, Charles Kennedy faces more daunting challenges than most travelers. He and his wife Andrea run www.accessanything.net and travel from Denver around the country to advise travel industry personnel on how to better deal with the handicapped.

He says the most common mistake he sees all travelers making is being woefully unprepared for the humdrum requests greeting anyone needing to board a plane.

“It’s common sense,” he says. “Be prepared, be organized and be on-time. Have your itinerary ready and your boarding passes out. Don’t give the TSA any reason to yell at you. These days they’re looking for excuses to do so.”

The couple have often been saved from inconvenience by booking rooms near the airport for after their flights are scheduled to depart. “Every flight today is either full or overbooked,” Kennedy says. “We book a room in anticipation that something will go wrong. If it doesn’t we cancel without any penalty. If it does, we don’t have to worry about spending the night on benches in the terminal.”

The late John Clouse held the title of world’s most traveled man until Veley usurped it. Clouse used to tell reporters he liked to travel with holes in his socks.

He’d always pack his rattiest clothes and simply discard them as the trip went along.

Veley says he packs light so he can on purpose run out of things on the road.

“I always enjoyed any opportunity that forced me out of my comfort zone and out into the culture,” he says. “Plus, you wind up with more interesting souvenirs. I ran out of toothpaste in Russia once. Every time I used the Crest at home for the next few months I was reminded of Russia because the Crest came with Russian instructions on the label.”

And leave that bad attitude at home, Veley says. No matter where you’re traveling, you always need to be tolerant of others and open to new experiences.

What’s the one thing he never leaves home without?

“Greet people with a big smile and you won’t believe the favors that’ll flow your way. Just the opposite for frowning people. Nobody wants frowning people crossing into their borders. Frowning people get detained for questioning all the time.”
Posted by Chris Rodell at 4:15 AM