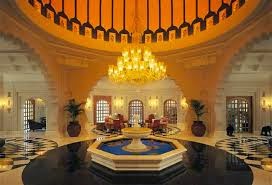 The public areas of some luxury hotels are so sumptuous you won’t mind having to wait for your hosts to ready your room. Here are some of the world’s greatest hotels with lobbies where you’ll long to linger.

The sweeping curves, the lush floral arrangements and the artistic photographs of natural loveliness are all designed to bring the best of the outdoors into the lobby. But it’s not the earthly elements that draw most of the attention. It’s the ones more associated with celestial bodies. The Beverly Hills Hotel is Hollywood’s undisputed hotel of the stars. Built in 1912, the hotel is featured on the cover of the legendary Eagles album, “Hotel California.” The list of celebrities who’ve strolled beneath the Venetian glass chandelier and down the grand staircase with its custom-designed rail of dark Verde metal with gold leaf accents reads like a who’s who of Oscar luminaries. There’s Elizabeth Taylor, Richard Burton, John Wayne and Clark Gable. Recent stars who’ve signed the guest book include Brad Pitt and Angelina Jolie, Robert DeNiro, Matt Damon and the musical sirs Paul McCartney and Elton John. And tabloid tattletales are never far from the Polo Lounge to report on the doings of frequent guests Paris Hilton and those still precocious Olsen twins. Time and fame may dim the luster of some stars, but the golden lure of The Beverly Hills Hotel has for nearly 100 years never been eclipsed.

THE POWER OF HISTORY AND A HISTORY OF POWER
Waldorf=Astoria, New York City

When in New York, visitors simply must make time for the landmark Waldorf=Astoria. The hotel, an art deco icon, certainly has the time for you. The robust inner front desk lobby is dominated by the magnificent gilded two-ton clock originally created for the 1893 Chicago World’s Fair extravaganza. The softer, more feminine Park Avenue entrance lobby is preserved from an era when women weren’t expected to sully themselves with tawdy business transactions. The hotel is the official residence of U.S. presidents when overnighting in New York and it was home to a musical commander-in-chief of sorts, swingin’ Cole Porter, who resided in the Waldorf from 1939-64. The revered songwriter (“I’ve Got You Under My Skin,” “I Get a Kick Out of You”) was a favorite of another frequent Waldorf denizen, Frank Sinatra. The Cole Porter Steinway piano resides in the lobby where top pianists provide the audio ambiance for one of the world’s premier power hotels. The piano overlooks the grand 148,000-piece Wheel of Life mosaic, based on the floor’s original hand-woven carpet designed by French artist Louis Rigal. Other touches of assertive elegance include a series of Rigal murals from 1935 and and an ornate crystal chandelier. Be sure to make time to visit the specialty shops past the front desk and enjoy browsing some of the rare books penned by literati like Mark Twain and John Steinbeck.

A ROYAL RECEPTION
The Oberoi Udaivilas, Udaipur, India (pictured above)

Many palatial hotels are praised as being fit for a king. Guests at the Oberoi Udaivilas say kings should be so lucky. The lobby decor is so resplendent that even the very air seems somehow regal. Hotel creators aimed to replicate in detail and scope the rich heritage of the Mewar region of Rajasthan, home to the world’s oldest surviving dynasties.  Distinctive lobby architecture with decorative interior domes, pavilions and intricate mirror work pays homage to the grand traditions of the region’s royalty. The lobby is panoply of decorative domes, fountains and artwork that aim to bestow royal ambiance. The space is dominated by a central dome festooned with gold leaf and punctuated by a grand chandelier dangling above a white Thassos marble fountain. The floor is a regal combination of beige Karoli sandstone, Udaipur green marble and white Thassos marble. Ornamental accents include displays of native Thekri, an artform unique to Mewar where molten glass is blown into balls using heirloom pipettes. When cool, molten mercury and lead are poured into the balls until they’ve coated the concave sides. They are then left to cool again. The result is then smashed and the pieces shaped into pleasing patterns. The art is almost as beguiling as the lobby views of Lake  Pichola and the mystical mountains that can be seen from the lobby.

The architectural critics fall all over themselves trying to shower this magnificent property with sufficient accolades. Still, they come up short when it pertains to the magnificent shower that dominates the Burj Al Arab. Taller than the Eiffel Tower and just 60m shorter than the Empire State Building, the hotel’s shell cocoons the world’s tallest atrium at 180m. A vibrant color palette derived from dominant earthly elements -- soil, sand, air, fire and water -- provide the rambunctious color scheme (with lavish gold accents). The soaring centerpiece is two golden columns with a breathtaking central fountain where water arches in skyrocket bursts surging more than 42m in the air. The fountain links with  another delightful water element that mocks what was once arid desert. Situated between the escalators is a cascade waterfall that combines finely atomized water with fiber optics to produce a unique kaleidoscope effect. As water and fog mingle and flow downward through the glass, stone-filled steps, water dances above in a choreographed movement that mesmerizes. Here is a serenity so refined that checking into the room, among the most luxurious in the world, decreases in urgency with every splendid drop.

Soviet soldiers eagerly took up residence here during World War II and may be among the few warriors who’ll dispute the contention that war is hell. But peace under communist rule proved as bad for glamorous properties as it did for the downtrodden. So it was with great fanfare in 2001 that Four Seasons lavished $110 million to restore Gresham to its 19th century neo-classical heyday. Mission accomplished. The lobby is a celebration of the Art Nouveau glories in both architecture and decor. In this palace, design is king. A soaring glass cupola rises above the T-shaped lobby that is entered through regal wrought iron gates bejeweled with giant iron peacocks, common in Hungarian folklore and emblematic of the Art Nouveau period. As stunning a setting as that is, it is the exploding spider web of a chandelier, the custom-designed Preciosa, that commands attention. The decorative illumination was created from hundreds of hand-shaped crystal leaves and lit by 76 hidden halogen bulbs. The lobby floor is a masterpiece mosaic containing 1,021,200 mosaic tiles with a delicately curved pattern, upon which balances Tumbling Dolls, a three-part sculpture by contemporary Armenian artist Mamikon Yengibarian.

Discerning art lovers from all over the world come to Athens to see some of the world’s greatest art. Some of them do so without ever leaving their hotel. The Athenaeum InterContinental (rooms offer panoramic views of the Acropolis) has more than 350 pieces of museum quality modern Greek art decorating the walls of its spacious multi-floor lobby. The tone is set from the first steps inside where Dmitris Foutris’s wall installation, the Beautiful X, lets guests know that this is a hotel where aesthetics are held in the highest regard. From the raucous to the refined, the sculptures and paintings engage the eyes of the most harried travelers. Dominating the lobby area is Greek native George Lappas’s exuberant Blue Man sculpture, a faceless shadow man in a breezy blue suit that defies its stuffy wardrobe by doing a cartwheel just steps from the front desk. With marble walls shaded to resemble the nearby antiquities, the lobby has a gallery-like feel soothing enough to lure city residents inside for respite from the bustle of central Athens. Sumptuous chairs stationed before many of the more prominent pieces invite more leisurely appreciation.

SPLENDOR WITHIN AND WITHIN REACH
Hotel Cipriani, Venice

If it’s possible for a hotel surrounded by water to be an oasis, then that hotel is the renown Cipriani. Because part of its allure stems from what it is not. It’s not crowded Venice -- euphoric as that ancient city may be -- but from the marble floors and the rich cherry wood-paneled walls of the lobby it seems like you caress that city that is among the world’s most vibrant. The 54-year-old Hotel Cipriani is just a three-minute launch from the its home on the tip of the Island of Giudecca to St. Mark’s Square. The lobby ambience might tempt those with an artistic bent to pull out an easel and create renditions of the historic island church of San Giorgio Maggiore and the vast Venetian Lagoon. Under the esteemed tutelage of renown hotelier Dr. Natalte Rusconi, considered among the world’s masters, the Orient-Express managed hotel features floor-to-ceiling views of the city.
Posted by Chris Rodell at 7:27 PM