Gideons spread word one Bible at a time 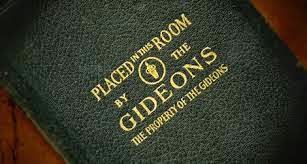 Ever met a Gideon? Know anything about their core beliefs? Their religious ambitions? Their impact?

Really, do you know anything about the Gideons other than one of them was there to provide timely revival for Rocky Raccoon?

In a world virtually awash with vibrant, proselytizing and often in-your-face religious groups intent on showing the weary the way, Gideons stand out for being the only ones sung about by The Beatles who still somehow remain divinely unsung.

“Most people are not aware of who we are or what we do and I think people would be surprised to learn the global impact of the Gideons on behalf of the Lord,” says Jim Seluta, a former Eastman-Kodak traveling salesman who in 1977 became a Christian and a Gideon because of a Gideon’s Bible he’d overlooked hundreds of times.

“That Gideon Bible in the drawer at the Sheraton Inn in Sturbridge, Massachusetts, room 312, saved my life.”

The Gideons are likely the most influential religious movement that is based, not in a soaring house of worship, but a former tire manufacturing headquarters.

Since their founding by Christian traveling businessmen in 1899, Gideons have distributed more than 1.6 billion Bibles to 193 countries in more than 90 languages.

And they’re just getting started.

Operating purely on donations, with no advertising or vast internet outreach -- there’s no Gideon blimp -- the Gideon way works precisely because Gideons ignore a golden rule of sound business practices, according to a marketing guru whose name includes “God.”

“Most marketers are seeking a return on investment that’s far higher than what the Gideons accept,” says Seth Godin, author of 13 marketing bestsellers. “They are using a different sort of balance sheet, so they can overspend and be delighted with a .1 percent ‘conversation’ rate, if you’ll excuse my use of the word ‘conversion’ in this case.”

Ah, yes. The Gideons make no bones that their idea of conversion rates differ vastly than the kind that set a typical accountant’s pulse to racing.

Bibles and pocket-sized New Testaments are given away to hotels, motels, prisons, hospitals, etc. at a rate of 2.5 every second of every day -- 1.5 million per week -- with the hope that souls are bound to be saved.

They are spiritual staples of nearly every hotel room and the only item guests are invited to steal.

“We don’t mind that at all,” says Murray. “Our statistics show one-quarter of all travelers will read the Bible in the hotel rooms and each Bible has the potential to reach 2,300 people over its six-year life expectancy.”

So Bible theft isn’t a sin?

“Not at all,” Murray says. “We often get notes in the mail with a contribution from someone saying, ‘Sorry, I took the Bible, but it saved my life.’ Take the Bible, not the towels.”

Gideons, more than 200,000 worldwide with 100,000 auxiliary members (wives and widows), are a multi-denominational organization of Christian believers who must be personally recommended by pastors who because of their devotion and faith in Scripture are deemed worthy.

Founding Gideons -- the name pays tribute to the resolute Israelite warrior in the Book of Judges -- concluded the most effective way to save souls in those pre-TV days was to put free Bibles where captive audiences might be ready to read.

“This is a lay organization that thrives without ever having had a charismatic leader courting public opinion,” says Mark Noll, a professor of American religious studies at Notre Dame University. “Gideons aren’t flamboyant. They aren’t controversial. You don’t know their positions regarding hot button issues. They are content to let the Bible be the face and voice of the organization.”

Once in the drawer, a Gideon Bible can be ignored by a thousand distracted travelers before it is picked up by just one who will use it to inspire millions.

Mary Kay Beard was on the FBI’s Most Wanted List in 1972 for a multi-state bank heist spree. She credits a Gideon Bible she read in prison for inspiring her to found the Angel Tree (http://www.angeltree.org) organization serving the children and families of inmates in all 50 states and in 45 countries.

Murray says each day brings riveting new tales of redemption from people who entered hotel rooms with intentions of sin or suicide and found solace in a Gideon Bible.

“The stories are so moving,” he says. “It’s a constant stream of people who were at the end of their rope and considering suicide when they decided to pick up the Bible.”

Each Bible costs the Gideons about $5.

The New York Times ran a 1995 story (http://tiny.cc/21pz3) about the Gideons. It quoted numerous high-profile hotels and resort properties about their in-room religion policies.

Today, hotel spokespersons are reluctant to even address whether or not they have Gideon Bibles in their rooms.

The ones that did were deliberately vague. This from IHG (InterContinental Hotels Group), which includes Holiday Inn:

“IHG has guidelines under which hotels make religious materials available for guests. Sometimes the materials are already available in the rooms and other times they are made available upon request.”

Has religion become so polarizing that service industry businesses are reluctant to engage or is that the Gideon’s prolific example has spawned enough imitators to blur once well-defined lines?

Marriott was founded by J.W. Marriott, a Mormon missionary, who saw to it The Book of Mormon was included in the drawers at his many properties.

Buddists, Hindus, Christian Scientists and even Scientologists have chosen to follow in the Gideon footsteps by leaving religious materials behind in hotel rooms.

The Greenbrier in White Sulphur Springs, W. Va., is willing to swear on a stack of Bibles it has them in every room and keeps a stack handy to replace the 25 to 50 each year that are taken from the rooms, according to resort spokeswoman Lynn Swann.

A painful divorce and feelings of forlorn desperation led him to seek answers in a Gideon Bible to try and find a resonant passage he’d fleetingly heard.

So, just like Rocky Raccoon, he pulled open a drawer in that Massachusetts Sheraton seeking a Gideon Bible.

“A previous guest had left it open to the Book of Philippians and underlined verses 6 and 7,” he says. “It was the very words I’d been trying to remember. Those words in that Bible changed my life.”

Seluta became an ordained minister and today is pastor at the non-denominational Christ Home Ministries at his home in Warminster, Pennsylvania.

Today, one of the first things does upon checking in to any hotel is locate the Gideon’s Bible. He finds and highlights the same verses and returns the opened Bible to the drawer in the hope it will help someone the way he says it helped him.

“That Gideon Bible changed my whole life,” he says.