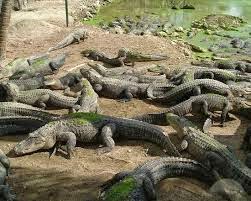 Of all the lessons culled from an unintentionally educational jaunt through the Everglades, one noteworthy nugget remains attached to my brain with barnacle-like tenacity:

Never, ever party with Gator Man.

Refuse his offers of rum, jungle juice and swamp swill. Don not be tempted by his tanned hospitality, his warm and chummy come-ons. Accept and the best — the very best — that can come from the encounter is you wake up with a pounding skull and a nauseous stomach. Drink with Gator Man — any gator man — and the consequences could be a loss of a finger, a hand, a limb and rivers of swamp-tainting blood.

Tourist: “People ‘round here ever get bit?”

Gator Man: “Oh, sure, it happens all the time. We had an old Indian just last week nearly got his head bit clean off.”

Gator Man: “He was drunkand somebody dared him to put his head in a gator’s mouth. He did and the gator bit him.”

Tourist: “You ever been bitten?”

Gator Man: Oh, yeah. See this scar? One had me about five years ago and wouldn’t let go. I thought it was going to tear my arm off. They are very fierce animals. Very strong.”

Gator Man: “We were having a party and my buddy dared me to put my arm in the gator’s mouth.”

Now, in defense of the fearsome and much-maligned gator, put just about anything in my mouth and my instinct is to bite down hard.

But drunken gator men aren’t sympathetic to this natural reaction. They are forever sitting around and daring each other to stick useful appendages into the mouths of yawning gators. If a gator man ever sticks so much as a wizened pinky in my mouth, I’ll instantly bite down hard enough to break the skin and then hang on tight until one of his colleagues beats me into numb submission with one of his handy prosthetics.

Such brutality, however, would not budge your standard Everglades gator. They come equipped with two strong jaws of 30 to 40 teeth that interlock when when el largato — Spanish for “the lizard” — bites down with 3,000 pounds per square inch of pressure, enough to crush the bones of small animals, drunken gator men and the occasional careless tourist, disposable camera and all. These prehistoric beasts can grow up to 20-feet-long and weigh up to 1,000 pounds of gnarled nastiness.

They make dangerous companions for anyone blessed with spry reflexes and 20-20 vision. Our aging Gator Man — that’s what his sign said, along with the parenthetic (Tips Accepted) — admits to being legally blind. he’s the ringmaster at Jungle Erv’s Alligator Park in Everglades City, about 30 miles east of Marco Island.

“I’ve been doing this for 50 years. I can’t even see ‘em anymore. Just shapes. I can see ‘em when they’re coming at me, but that’s it.

“Last week, my wife hollered, ‘Hey, there’s a gator out running on the road!’ One ‘em was gettin’ away. I ran after it and grabbed it by the tail. One of the first things you learn when handling gators is never grab ‘em by the tail. They’ll turn around and snap your arm right off. I guess I forgot. Dang thing turned around and bit me on the shoulder. Man, did it hurt.”

Now, I’ve never seen a cuddly looking gator, but I suppose if the world of gators could be divided into two camps — pleasant and mean — then the gator’s at Jungle Erv’s clearly belong in the latter category.

Like the gator men who tend them, many of the creatures sport a stump.

“That comes from the mating season. The males fight over the females and sometimes it gets nasty,” Gator Man says.

This one’s missing a paw, a former 11-footer has lost more than a foot of tail, and one cross-eyed lizard is missing a chunk of snout. None of them looks particularly happy.

And who can blame them?

Gators can live up to 100 years in captivity. Some have lived more than half that right here at Jungle Erv’s. For comparative purposes, imagine spending half your life confined to a broken down bus with 20 other surly commuters and an old blind man who shows up to feed you rotting fish heads every time someone comes by to ask impertinent questions about your mating habits.

That’s the glory of Florida mom ’n’ pop gator farms. Unlike so many pricey theme restaurants that cram environmental niceties down your throat, most independent gator farms are joyfully and unapologetically incorrect. It’s a slice of America before all the nagging got out of hand.

A visit to a gator farm like Jungle Erv’s holds a sort of morbid fascinating in watching the menacing looking inhabitants who could at any moment spring on their captor and make a meal out of him.

The revenge we witnessed, however, could have been an innocent biological function of a baby gator. The Gator Man was seeking volunteers to to old a two-foot infant when the reptile voided all over its handler’s shoulder. The sweet-smelling substance was exactly the color and fragrance of the popular sports refresher named, perhaps coincidentally, “Gatorade.”

The incident did not seem to faze the cheerful blind Gator Man one bit, and the only animal that seemed more relieved than the gator was an elderly Ohioan who just missed an unwelcome shower. He’d wisely resisted our host’s efforts to have the gator perch on his shoulder. After the baby gator voided the rest of us felt safe to posing for pictures with it. Mine’s now in a scrapbook, an odd reminder of of a surreal sort of memory that’s tinged with faint regret.

You see, none of us tipped Gator Man so much as one red cent. Throughout the weekend spent one and around the lovely sugar shores of Marco Island, we tipped tanned, fit men and women who carried our bags, brought us food, poured our drinks — most from the air-conditioned splendor of fine hotels, restaurants and taverns. None of them risked their lives to carry out their menial duties.

But for an aging gentleman who braves dozens of man-eaters daily to thrill and entertain undeserving tourists, we had not a buck. A blind Gator Man is deserving of a more generous audience.

Still, I can’t help but think was just happy we treated him better than the baby gator did.

Being an Everglades gator man must add perspective to one’s life.