Marching on Gettysburg with daughter, 12 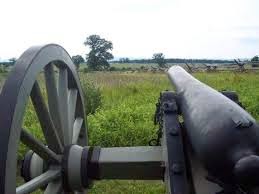 I’m doing something tomorrow I haven’t done in more than 20 years: I’m getting in the car and going for a long drive hoping I can get a girl to fall in love with me.

The stakes are higher than they’ve ever been, even as the girl is lower than any other.

She’s my 12-year-old daughter and we’ll be consecrating our weekend together in the blood of dead heroes.

We’re going to Gettysburg. As prelude, I’m yanking her out of school today for lunch and an early screening of Stephen Spielberg’s “Lincoln.”

My march to Gettysburg is every bit as important to me as Robert E. Lee’s was to him. It’s do or die.

As the country is poised on a fiscal cliff, I sense Josie and I are perched on a personal one.

I understand in a year, maybe months, she won’t be applying the brakes as she approaches the cliff. She’ll be flooring it.

It’s perfectly natural. I remember at her age being so eager to grow up -- and just because it still hasn’t happened with me doesn’t mean it might not happen with her.

She’s starting to understand the joy of camaraderie, of being with your own, of friends banding together against common enemies.

And I’m playing my role, too.

As she’s starting to test the boundaries of her freedoms, I’m there standing guard against her going too far. Kids need that.

Many fathers of daughters I admire say the same thing. When a daughter hits about 13, she just goes away from her father who as a result of her biological and emotional changes becomes an even more alien creature next to Mommy.

They say we’re on the verge of a Civil War destined to last about five years, a little longer than the duration of what many of our Southern friends still refer to as “The War of Northern Aggression.”

A natural pacifist, I will do everything I can to avoid the inevitability of the coming storm.

That means taking my sockdologizing old mantrap of a girl on a daddy/daughter weekend to Gettysburg.

Calling a girl a “sockdologizing old mantrap” probably doesn’t sound like a term of endearment. It is with me and J-Ro.

It was a year ago when I was reading Jay Winik’s outstanding Civil War history, “April 1865: The Month That Saved America.”

Josie was watching something I deemed insufficiently worthy and told her to shut the damn TV off. I had a story I wanted to tell her.

I read to her the part where John Wilkes Booth skulked into the presidential booth at Ford’s Theater and waited for the precise moment when actor Harry Hawk calls an adversarial character a “sockdologizing old mantrap.” The insult provoked the biggest laugh of the play and Booth hoped to use the guffaws to cover the pistol’s clap.

And those were the last words Lincoln ever heard.

The story had the intended effect. Josie was mesmerized.

She became even more fascinated when I told her Lincoln died 47 years to the day before Titanic went under.

So we bond over history and when I was invited to attend Lincoln Remembrance Day festivities in Gettysburg, I seized the opportunity.

Tomorrow she and I will drive four hours, tour the battlefield, visit the museums and on Monday morning witness the 149th historical reenactment of  Lincoln reading 263 of the most powerful words ever written (this is already plus-600 for those of you keeping score).

But it won’t be Lincoln and all that happened between Union and Confederate that’ll matter most to me. It’ll be all the little father and daughter moments in between. I will revel in the talks, the secrets and the togetherness of times I know she’ll never forget.

See, this weekend despite what we filled out on the school permission slips isn’t about studying history.

It’s about making it.